​Riding in the Key of Life

Mark Willey is master of the keyboard, and also of his commute. 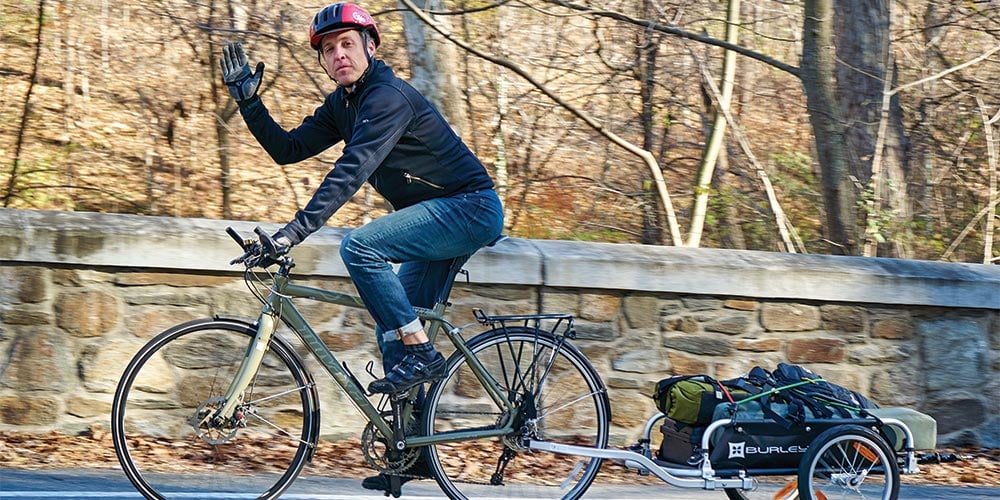 Mark Willey is passionate about music. You’d expect that from someone who graduated from Baltimore’s Peabody Conservatory and serves as organist and director of music at Spencerville Seventh-day Adventist Church in suburban Washington, D.C.

But another one of Willey’s passions (and he has more than one) is cycling. “I have home movies from when I was 2 years old, riding down our driveway in Loma Linda on a little plastic bicycle,” he says. “My two biggest influences would be those two things: music and cycling. My life would be impoverished without both of those.”

And just as music is mathematically precise—so many beats to a measure, so many notes in a line—Willey’s precision led him to a startling realization a few years ago: maybe he and his wife could get by with one car between them, instead of two. “Insurance, gas, repairs, tires, all the rest of it, we figured that by selling my car and not replacing it, we could save possibly $700 a month.” He decided to take up the slack by transitioning from four wheels to two.

Several years before, Willey had started moving toward commuting by bicycle. “I remember thinking, You know, it would be interesting to see if I could ride to work.”

And while getting around on a bicycle might sound practical in small towns and medium-sized cities, we’re talking about Washington, D.C., an area that regularly makes the list of cities with the nation’s worst traffic.

First, Willey calculated the distance he would have to travel, about 13 miles each way. Then he started collecting clothing and equipment to make his rides safer, more comfortable, and more convenient. “I purchased a rack and waterproof bags to carry what I need for the day. I even got a trailer for my bicycle that I can put 100 pounds of stuff in, in case I have a lot to carry. I ride pretty much year-round, except for snow. But I’ve ridden into the teens and twenties. I ride at night, with powerful lights on the front and back.” Over time, he discovered routes that were more scenic and bicycle-friendly.

Commuting by bicycle needn’t be expensive. Willey found his bike used on Craigslist for $400. He suggests finding a bike that fits comfortably; good brakes are essential. He also recommends investing in good clothing, gear suited to the climate that’s both comfortable and visible. If you haven’t been on a bike in a while, make sure you’re comfortable on a bike. Go to a parking lot or a residential area where there’s not much traffic, and practice turning, stopping, and avoiding obstacles. “Then just go out and ride; experience it. It’s one of the best parts of my life,” he says.

Willey finds cycling rewarding on every level: physically, emotionally, and spiritually. Contrary to what most people might think—that cycling 5,000 miles a year would take more out of you than it gives—his experience is just the opposite. “When I ride, the choir’s asking me, ‘You must’ve ridden,’ because they know. The energy I bring to the experience makes a world of difference.”

For Willey, riding a bicycle is a multisensory experience. “Riding snaps you out of lazy thinking,” he says. “I generate my best ideas on the bicycle.” In addition to the plants and animals one would miss speeding along in a car are the aromas and temperature changes for which most people riding in cars would be unaware.

A commute that takes 25 minutes one way in a car takes only 50 minutes on a bike. “The way I look at it,” he says, “for basically an extra 50 minutes a day, I get an hour and a half of exercise. My workday is more productive, and I sleep well: it’s magnificent.”

Willey and his wife, Joy (also a cyclist), still use their car. But cycling helps order their lives. “It’s always about connecting lines,” he says. “Sometimes I’ll say, ‘I don’t have time to ride; drop me off, and I’ll ride home.” Or “I’ll drop you off here and pick you up there.”

Finally, there are the health benefits. According to Willey, many Adventists have a rather narrow view of what it means to have a health message. While Adventists have been known to avoid alcohol and tobacco, they haven’t always been as careful about their use of sugar and fat, leading to significant numbers of Adventists who struggle with their weight and with related lifestyle diseases, such as heart disease and diabetes. Vigorous exercise several times a week has been shown again and again to help prevent diseases related to lifestyle. With a family history of heart disease, he says, “I’m going to break that. I don’t expect to live forever, but with little things you can improve your life and enjoy the journey.”

After decades of riding accident-free, Willey is amused by friends who say, “Oh, you’re riding home; please be careful.”

“I know things can happen,” he says. But he sees commuter biking as no more dangerous than driving 70 miles an hour in a car. It’s a calculation, and he’s comfortable with the odds.