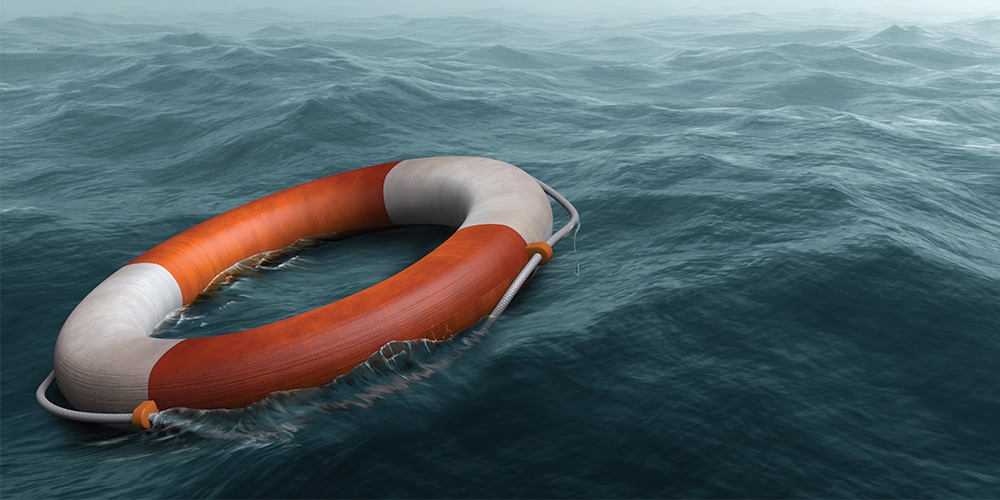 We are fascinated by stories of rescue—bringing to safety people stranded on a mountain, marooned on a deserted island, or trapped in a cave. Our hearts go out to them, perhaps because we, too, might someday be trapped and in need of rescue.

Rescue, however, can take different forms. We might be trapped in a bad habit, an unhealthy relationship, or a finanical crisis, and need to be rescued. Sometimes the situation is so challenging that only Jesus, our all-powerful Lord and Savior, can rescue us.

The Meaning of Rescue

Merriam-Webster defines rescue as freeing or delivering from confinement, violence, danger, or evil.1The Old and New Testaments have many words for rescue and deliverance (the two words are interchangeable). To rescue or to deliver is to redeem, to ransom, to draw to oneself, to take out of one place and put in another place, to come to a person’s aid, and to save: “The Lord will rescue me from every evil attack and will bring me safely to his heavenly kingdom” (2 Tim. 4:18). “I sought the Lord, and he answered me; he delivered me from all my fears” (Ps. 34:4). When God rescues us from something, He bring us into something better. God’s deliverance of Israel from Egypt included bringing them to the Promised Land. When He delivers us from the power of darkness, He bring us into the kingdom of His Son (Col. 1:13, 14).

Rescue in the Bible

In the story of David and Goliath we see a demonstration of the power of God when He rescues His people from their enemies. David said, “The Lord . . . will rescue me from the hand of this Philistine” (1 Sam. 17:37; see also 2 Kings 20:6). Israel’s Exodus from Egypt is an extraordinary example of deliverance. There God defines Himself as the deliverer of Israel who rescues His people, not because they deserved to be rescued, but as an expression of His mercy and love (Ps. 51:1; 71:2; 86:13).

In the New Testament God is always the subject—and His people always the object—of rescue or deliverance. God offers deliverance from humankind’s greatest perils: sin, evil, death, and judgment. By God’s power believers are rescued and delivered from this present evil age (Gal. 1:4) and from the power of Satan’s reign (Col. 1:13). Deliverance is available only through the person and work of Jesus Christ (Rom. 4:25).

Christ also delivers His people from the trials of this life (2 Peter 2:9). Sometimes that deliverance is God walking by our side through trials, comforting and encouraging us through them as He uses them to mature us in faith.

On the other hand, Paul assured believers in Corinth that “no temptation has overtaken you except what is common to mankind. And God is faithful; he will not let you be tempted beyond what you can bear” (1 Cor. 10:13). In these cases rescue can be immediate or in due time when God makes a way of escape.

Rescue and deliverance are often sought from evil spirits or the spirit of lust or jealousy. Believers need to understand that we already have victory over Satan by the blood of Jesus. But we can also be delivered from his influence in our lives by the power of the Holy Spirit.

Deliverance from sin, rescue from trials, and escape from the influence of the world come only through Christ, the Son of God, who has come and given us power and grace and understanding (see 1 John 5:19, 20).

The One Who Rescues

I once saw a swimmer get rescued. The rescuer was a trained, strong swimmer who had learned the technique of rescuing and was willing to do it. So, too, Jesus saw us drowning in sin and plunged in to save us.

The Need for Rescue

On June 23, 2018, a group of young Thai soccer players and their coach became trapped in the Tham Luang cave complex in Thailand. When rescuers finally found them days later, they dropped food through the holes of the cave, hoping the victims would find it. Continual heavy rains complicated the situation. Officials were also concerned about depleted oxygen levels in the cave. In an initial rescue attempt, a former Navy SEAL diver died from a lack of oxygen. Rescue workers, however, didn’t give up. With careful planning and heroic courage, about 1,000 people who had come together from numerous countries were able to save all 13 stranded people.2

We humans have sinned, have dishonored God, and are trapped in a cave of darkness, sin, and pain. Paul tells us that “we are continually sinning and falling short of the glory of God” (Rom. 3:23, author’s translation). Our heavenly Father, however, didn’t spare any expense to reach and rescue us. It cost Him everything. But He sacrificed all to save you and me because in His eyes we are worth it (see John 3:16).

The boys and their coach who were trapped in the cave were totally helpless. They could not save themselves. They had to depend on and trust in others.

The same is true when it comes to our salvation. We are totally helpless. There is no way we can save ourselves. We need Jesus, the greatest deliverer of all time, who dived into our messy, muddy world to rescue us. Jesus became the diver who came to rescue us from sin and death.

The Thai kids had to trust the divers, the equipment, and the methods. We also have to trust our diver, Jesus, His method, and His words.

If we are to be rescued from the pit of personal sin and delivered from death and destruction, it will have to be by Someone strong enough and able enough to do it. Only One is able and mighty to save. He is our Lord, Jesus Christ.

S. Joseph Kidder is professor of Christian ministry and discipleship at the Seventh-day Adventist Theological Seminary in Berrien Springs, Michigan.