For the times we think we know the whole story. 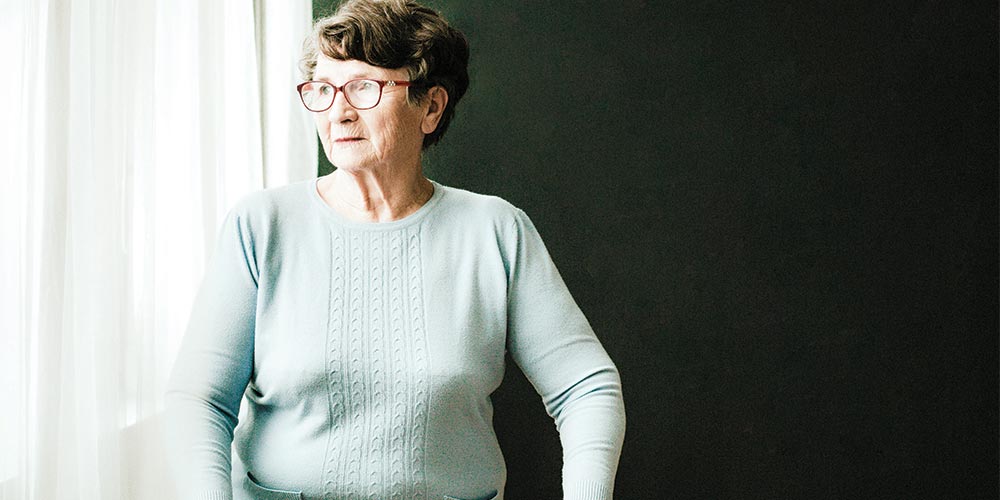 "She always complains. Nothing is ever right,” exclaimed one of my exasperated employees. “I’m getting tired of her demanding ways.”

My husband and I own a personal-care home, and the employee was venting to me about one of our particularly difficult residents, Lydia. Lydia tested the patience of even our most seasoned caregivers.

A rather particular person, Lydia was more than willing to share her opinions about almost anything: from food, to lighting, to planned activities. She also had special demands, such as a foot rub every night, and a special way she wanted her bed turned down. Occasionally, only occasionally, did she ever offer a “please” or “thank you.”

Yet any time of the day, if you entered Lydia’s room you would find her reclining in her chair with an opened Bible on her lap, rosary in hand, poring over the Scriptures. How can she act the way she does when she spends so much time reading the Bible? we all wondered.

One day Lydia had to go to the doctor. I hadn’t seen her receive many visitors, only a brother who visited occasionally, so I offered to take her to her appointment.

On the way back from the doctor’s office I was amazed to hear her express sincere gratitude. “Thank you for taking me,” she said softly. “I really appreciate it.”

She wanted to pay me, but I said no. “My treat to you.” Her eyes brightened, and she smiled for a second. Then, as if the floodgates of pain from her former life had just been lifted, out spilled an astonishing, heartbreaking story.

“You know, I don’t have any family that can help me with things like this,” Lydia said. “My brother is my only family now, and he doesn’t live nearby.” Her eyes seemed to focus on something in the distance. I could tell that she was recalling something from the past.

I looked at the photograph and almost gasped.

I gently asked, “Lydia, I know you’re a widow, but I don’t think I’ve ever heard if you have children.”

“I had two boys,” Lydia responded almost in a whisper. “They’re not with me now. My oldest was killed in the Vietnam War. Our whole family was devastated. My younger son went into a deep depression after losing his brother, and committed suicide two months later.”

She continued: “I didn’t think it could get worse, but it did. A few months later my husband was repairing our roof. He fell off the roof and died. Within a matter of months I was driving my parents to an appointment. I had a seizure while driving and we were in a terrible wreck. Only I survived.”

I had to drive, but I wanted so badly just to throw my arms around her. I had a modern-day Job in my passenger seat! I couldn’t believe that someone could endure that much tragedy. I had tears in my eyes as I glanced over at her and offered my sympathy for what she had gone through.

Surprisingly, she didn’t show much emotion; she just responded stoically. That moment I realized that any emotion she had once possessed was probably exhausted through years of trying to come to terms with such tremendous loss.

Photographs and the Stories They Tell

The next day I visited Lydia in her room. I had never noticed them before, but this time I saw three little frames on her nightstand. The faces in the frames revealed some strikingly handsome faces from yesteryear. I picked up one of the photos. “Was this your husband?” I asked. She nodded. “Wow, he looks like a movie star. He actually looks like Gregory Peck!” I exclaimed.

A broad smile spread across her face. “People used to tell us that we looked like a Hollywood couple.”

The other two frames contained photographs of each of her two sons. Again, I commented about how handsome they were, and how I could see their resemblance to their father.

“But where’s your picture?” I asked.

She dropped her head a bit, the smile fading from her face. “I don’t like to show it to people. It was taken before I got sick.”

“Oh, Lydia, I’d love to see it,” I said. “I need to see what you looked like when you were on the arm of Gregory Peck!”

She opened the drawer to the nightstand and slowly pulled out one more small, oval frame. She handed it to me. I looked at the photograph and almost gasped. Staring back at me was a picture of one of the most beautiful women I had ever seen. Lydia was absolutely stunning. The long flowing hairstyle of the 1940s draped around a flawless face that featured large, sparkling eyes. And the smile, oh, the smile was gorgeous. She honestly looked like pictures you see of a young Marilyn Monroe.

Lydia must have noticed my complete amazement because she said, “See, that’s why I don’t like to show it. I looked like that once.” Then leaning on her walker, and looking at her swollen feet clothed in tight diabetic hose, she sadly reiterated, “That was before I was sick. But look at me now.”

Taking the frame from my hand she returned it to the drawer, facedown. I felt so privileged that she showed it to me, but I regretted that I had caused her to revisit a painful past—a past she preferred to keep in the drawer.

I tried to reassure her that we all have reminders of when we looked our best, and we all have to come to terms with the aging process. But I realized that for Lydia it was more than that. For Lydia the process of aging was just one more loss, and she didn’t need that reminder.

That afternoon was the beginning of some understanding on my part, and on the part of our caregivers. The foot rubs are now lovingly given because we understand that Lydia needs to feel the healing power of touch. Where else is she going to get that? And we now know that all the little demands come to us because she needs to feel our attentiveness—to know that someone still remains in her life. After all, we are her family.

And can you guess what else happened in this process of understanding? Our caregivers tell us that they are hearing “please” and “thank you” from Lydia more often, and she’s learning how to request rather than demand.

We’re also noticing that she is being more helpful to the other residents. The more giving we are to Lydia, the more giving we see her become to others. This circle of generosity must be what Paul wanted us to experience when he wrote: “In everything I did, I showed you that by this kind of hard work we must help the weak, remembering the words the Lord Jesus himself said: ‘It is more blessed to give than to receive’” (Acts 20:35).

Beverly Owen has been a pastor’s wife and enjoyed a long career as a marketing executive. She lives in Georgia, where she and her husband own a personal-care home.