God’s love is seen most often in His followers. 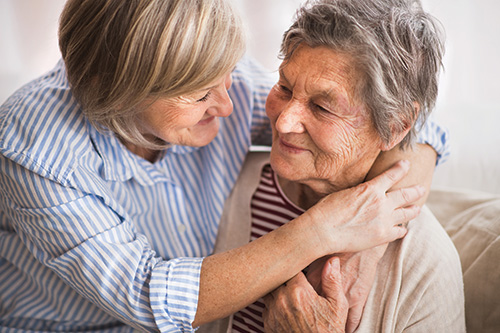 In my house is a large steamer trunk on which is written the faded name of my grandmother. Inside, from side to side and top to bottom, is memorabilia she collected—much related to family history. For the most part, the trunk has sat undisturbed for the past 20 years.

Recently needing some information, I opened the trunk. But the contents were so disorganized and scattered that I decided that emptying the trunk might be the best strategy. Of course, that turned out not to be the quickest of jobs. I became distracted by looking through and reading its contents, and much to my husband’s dismay, things lay scattered on his study floor for more than a little time.

It was somewhat cathartic. Not that I felt any need for such an experience, but to be confronted with so many images from the past, one could not help reflecting on how many of these people, some I knew and many I didn’t, were now resting in their graves.

I was reminded of my great-aunt who lived alone for a number of years, the last of her siblings, on the family homestead in central Wisconsin. Letters tell her experiences of mostly long and lonely days, often spent with only pets for company. Other correspondence reveals stories of family members, both young and old, spending their days alone reading, writing letters, or occasionally watching TV.

In addition to the photos and letters were poems, lots of them. My grandmother fancied herself a poet. Not the kind who would ever be published, but she put almost all her thoughts into verse covering many a scrap of paper. She lived alone in an apartment just a couple streets away from ours. I remember visiting her after school. My mom, an only child, carried the weight of assisting, buying groceries, and visiting. I remember her actively engaged in my grandmother’s care in addition to working two jobs and taking care of our family. But my memories of these generous gifts of time collapsed when I read a “poem” my grandmother probably never meant to share. Here are a few stanzas:

Sometimes my hopes are brightened for a Sabbath visit,
I read my Sabbath literature and rest for hours—She didn’t come!
Then there is hope for some Sundays,
I write letters, read my paper, gaze out the window
My eyes grow weary—she didn’t come!
Then comes a day of surprises—
Groceries left, mail picked up, Guides, letters and clippings brought over
She did come!
Like a child who is ever seeking,
Can you blame me if I feel this way?
Can you understand my satisfaction and happiness
When I can say: “She really did come today”?
Reading this only helped increase the guilt I was beginning to feel as I looked through these things from the past. I found myself asking, Did I do enough?

My grandmother is not alone in her complaint. A retired couple is close to their family—enough to babysit grandchildren (sometimes overnight and weekends) and help on a regular basis. But now the grandchildren have grown and are more independent. Now the couple find themselves sitting and waiting for the phone that doesn’t ring. “They don’t need us anymore,” they say. It’s certainly not true, but it’s possibly how it feels when adult children have active and busy lives.

Is it possible that love doesn’t go far enough?

A recent newspaper advice column echoed similar sentiments: “How do I get my adult children to spend more time with me? Yes, they call twice a week. Sometimes they even stop by. But what I really want is quality time. I just want them to sit down and talk with me.”

A study released by the health insurer Cigna in May 2018 reveals that nearly half of all Americans feel lonely. Of the 20,000 adults surveyed, 54 percent of respondents said they feel as if no one actually knows them well. Approximately 40 percent said they lacked companionship, that their relationships aren’t meaningful, and that they feel isolated from others even in the midst of a crowd.

In addition, those hit hardest by loneliness, according to the survey, are younger Americans. Those born between the mid-1990s and early 2000s scored highest on the UCLA Loneliness Scale, followed immediately by Millennials. These two groups scored higher than the average of all Americans.1

What Would Jesus Do?

We like to quote a few favorite Bible passages, not only because they offer direction, but also because they seem to fill us with deep satisfaction.

Then there is Matthew 25:34-36: “Then the King will say to those on his right, ‘Come, you who are blessed by my Father; take your inheritance, the kingdom prepared for you since the creation of the world. For I was hungry and you gave me something to eat, I was thirsty and you gave me something to drink, I was a stranger and you invited me in, I needed clothes and you clothed me, I was sick and you looked after me, I was in prison and you came to visit me.’”

Clearly this is the “love” checklist we long for. Check the boxes, and we’re done! We can gain great gratification because we help at a soup kitchen, visit a nursing home resident, or share our gently used clothing with the neighborhood clothes closet. And we should! People need food, visits, and clothing. But should there be more? Doing for people is fine, but maybe what people need is quality time—loving deeper. It isn’t all about providing; it’s about giving.

Ellen White tells us that as Jesus, together with His disciples, walked toward Gethsemane, His footsteps got slower, His silence grew deeper. By the time they reached the entrance to the garden, the disciples were supporting Him lest He fall—the burden He carried was so great.

Taking His three closest disciples with Him, Jesus moves a bit away and collapses in deep, agonizing prayer. The disciples are close enough to Him to hear His troubled words and see His deep despair, yet they do not go to Him. Instead, their sleepiness gets the best of them, and they slump down in slumber. Ellen White wrote: “The human heart longs for sympathy in suffering. This longing Christ felt to the very depths of His being. In the supreme agony of His soul He came to His disciples with a yearning desire to hear some words of comfort from those whom He had so often blessed and comforted, and shielded in sorrow and distress.”2 Three times the Savior longs for human closeness in the form of words and physical presence, and three times He finds the disciples asleep.

Three times the Savior longs for human closeness in the form of words and physical presence, and three times He finds the disciples asleep.

It is easy to criticize the disciples. It is easy to believe had I (we) been there, it would have been different. But I don’t think so. The disciples had been busy prior to this moment. The hour was late and the garden was quiet
. Their love for Jesus was no less than what they had expressed just hours earlier. Like us, their busyness caused them to do what they could, but stop short of doing more. They loved Jesus, but in that moment their love didn’t quite stretch to the depths of His need.

I have a coworker who has a natural giftedness for reaching out to people. He can go to a restaurant and by the end of the meal know the name of the server, where they are going to school, all about their family, and what is important to them. Good tips are great, but showing a server they are more than someone carrying a tray is priceless. It’s about loving deeper.

Douglas Maurer, 15, was diagnosed with leukemia. The doctors explained the disease and told him that he would need to undergo three years of chemotherapy. They said he would go bald, his body would bloat, but there was a good chance the disease could go into remission. Douglas knew the unspoken truth. It could also be fatal. Upon learning this, Douglas went into a deep depression.

His aunt called a floral shop to send Douglas an arrangement of flowers to cheer him up. She told the clerk that the flowers were for her teenage nephew who’d just been diagnosed with leukemia and to make them bright and cheerful. When the flowers arrived, they were beautiful. Douglas took the envelope that came with the flowers and read the card from his aunt. Then he noticed a second card. Pulling it out, it said: “Douglas, I took your order. I work at Brix Florist. I had leukemia when I was 7 years old. I’m 22 years old now. Good luck. My heart goes out to you. Sincerely, Laura Bradly.”

Going through my grandmother’s trunk made me purpose in my heart to love deeper. It isn’t easy. I’m still busy. Still distracted. Still tired. Still stretched by work, family, church, and more. But committing to help others, show extra care, listen better, sit longer, and spend more time is where Jesus wants me to be.