He’s not as terrible as he seems. 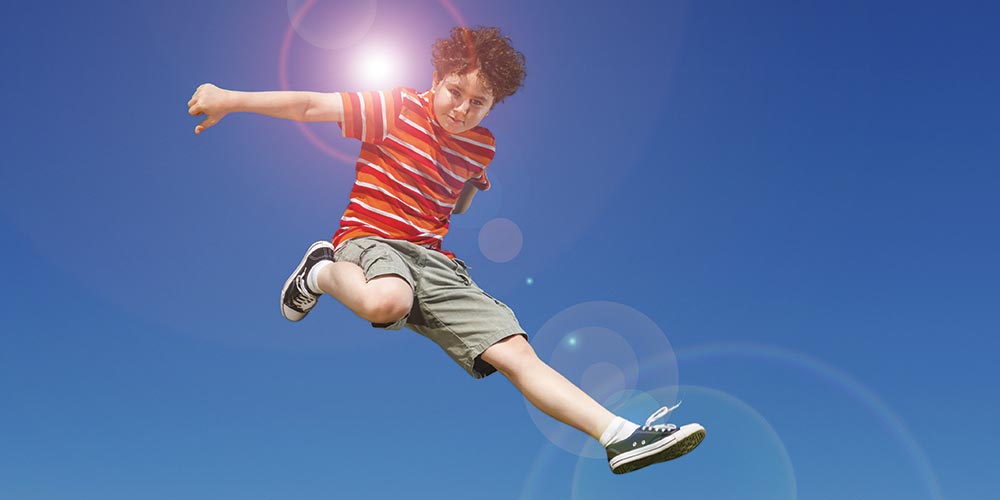 We had the coolest tree fort around. From a distance, it looked like a typical oak tree, except the leaves hung all the way down to the ground. It’s when you walked through the leaves and into the inner sanctuary that the fort became what dreams are made of, for life looms large when you’re a kid.

The branches of the tree progressed to the top of the tree in steps. A kid could walk up the steps so high they could poke their head out the top! Or they could just sit on one of the highest steps and look down on the “lowly creatures” on the bottom rungs. And, of course, into this prestigious, pious group one could enter only by knowing the password.

Life at the tree fort was good. But life on Killer Hill was awesome.

Only the fearless and daring attempted to conquer this “mountain.” There were the kids who rode their bicycles down this dangerous terrain. Other brave but not-so-daring souls would roll down Killer Hill. Still others—I’m not sure if they were fearless, daring, or just plain suicidal—would jump. My brother, Bruce, fell into this last category.

Bruce, affectionately known by the younger kids as “Boochie,” was the neighborhood daredevil and clown. One was never sure when he was serious or when he was joking. But the day Boochie jumped Killer Hill became a day that lived in neighborhood infamy.

A small group of kids were standing around to watch this daring feat with the awe of childhood, faces intently focused as Boochie made a running dash and jumped into the air. But as he landed, his Tarzan sound effects morphed into cries of pain.

A small group of kids were standing around to watch this daring feat with the awe of childhood.

The kids scurried down the hill to where Boochie lay, his legs twisted into an abnormal configuration. Everyone formed a circle around him. Dinker (given name, Douglas) was the first to speak.

This banter went on for about a minute until Dinker pronounced, “Yes, you are joking. So I’m going to test your leg. I’m going to jump on it!”

At this point Boochie screamed with such a shrill of terror that Dinker finally realized Boochie the Clown was off duty. His leg really was broken.

The ambulance took Boochie to the hospital. His leg was indeed broken. His new challenge, after Killer Hill, was to walk with crutches for the next couple months with a cast on his leg. But that only increased Boochie’s fame as all the kids came to sign the cast. He became King of Killer Hill, but in a different sort of way.

Different, but the Same

I’ve gone back to my childhood stomping grounds. The tree fort still stands, and Killer Hill continues to call the young and fearless to challenge it. Life was still good at the tree fort, but I can’t remember anyone in our group attempting to “conquer” Killer Hill much after that. We chose to ride bikes, climb trees, hang upside down from clothesline poles, play army, fly kites, and make clothes for our dolls (we girls, of course).

I guess the mountain wasn’t conquered after all.

But neither were we.

We all have “killer hills” that we face. Some appear small and relatively insignificant. Others loom larger than life. They might look like losses of loved ones, hopes, dreams, health, relationships. They might look like challenges with family members, friends, coworkers. Whatever our killer hills, we attempt to conquer them, yet they often wound and break us, threatening to conquer not only our bodies but our souls as well.

But God has some words for us:

“The voice of one crying in the wilderness:
‘Prepare the way of the Lord;
Make straight in the desert
A highway for our God.
Every valley shall be exalted
And every mountain and hill brought low; The crooked places shall be made straight
And the rough places smooth’ ” (Isa. 40:3-5).*

In ancient times, when a king journeyed through the less frequented parts of his dominion, a company of men went ahead of the royal chariot to level steep places and to fill up the hollows, that the king might travel in safety and without hindrance.

What do kings’ journeys have to do with us?

“To Him who loved us and washed us from our sins in His own blood,and has made us kings and priests to His God and Father, to Him be glory and dominion forever and ever. Amen” (Rev. 1:5, 6).

By His life and death we are more than conquerors! We are kings and queens. And through His power and strength, even though we may not yet see it, He has already brought the mountains low, made the crooked places straight and the rough places smooth.

As we journey with our God and encounter our killer hills, He will heal our wounds. He will bind our breaks. He will give us the faith to believe that even though we may have been broken and discouraged by our mountains, we will not be conquered! He will use our wounds to bring others comfort and healing. And when we look back at our killer hills, we really realize how small and insignificant they really were in comparison to the greatness of our God.

We too will become Kings of Killer Hill.

Bonita Joyner Shields is an associate director of the Stewardship Department of the North American Division. She is also the author of Living in a Man’s World, published by the Review and Herald Publishing Association.