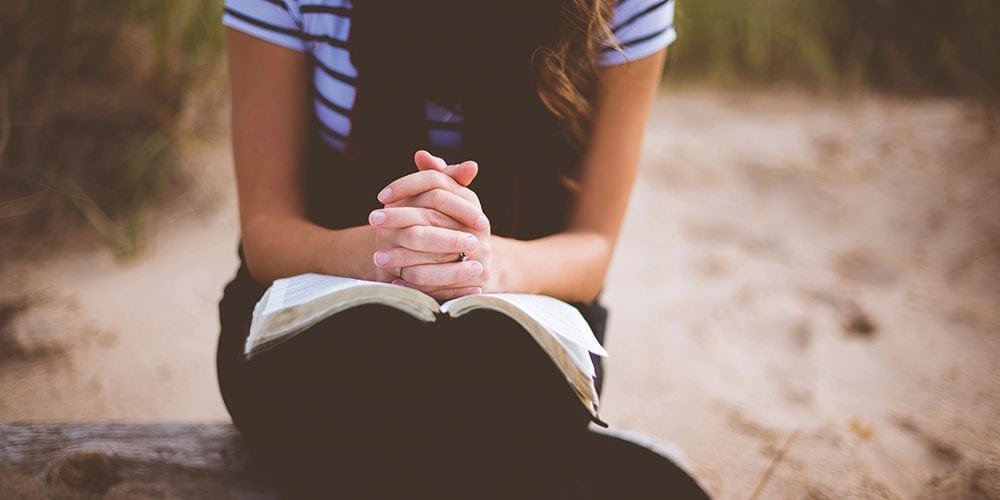 At age 15, while going through various conflicting stages of adolescence, I learned about Jesus and His marvelous message of salvation. As my parents granted me freedom, allowing me to step out with my girlfriends, I thought that freedom would bring me happiness. Instead it produced a void filled with intense frustrations.

One night after coming home from a party, I happened to spot a Bible on the table. Perhaps it had always been there, but that night I was irresistibly drawn to it, as if a voice said, “Here is the solution to the emptiness you feel.” I started reading. When the sun came up, I was reading in the book of Revelation.

What I read frightened me. Instead of finding the sense of peace that I had longed for, I became preoccupied with those future events: predictions of plagues, destruction, and earthquakes. I couldn’t sleep, so I prayed as I had never prayed before. I pleaded with God to help me to understand what I was reading so that I could be part of His people. I continued reading the Bible daily, praying often, asking for an understanding of the book of Revelation.

About a month later two Seventh-day Adventists visited our home. They offered us a course of Bible studies explaining those apocalyptic mysteries. I was thrilled that God seemed to be hearing my cries for help. My father and I accepted their invitation, and we began Bible studies.

During each lesson I was surprised to learn how to understand the Word of God, and to see that the book of Revelation, contrary to what I thought before, is a book that offers hope and comfort to individuals such as me.

With the acceptance of these truths came tests from some of my relatives and friends. I soon realized that my only true friend was Jesus. Many of my friends stopped talking to me, and those who kept in touch ridiculed my new faith. I began to understand that following Christ meant carrying a cross. In the midst of this struggle a conflict arose within me. I realized that when I tried to do good, only evil resulted.

We should not consider persons unconverted because they do not behave as we would like them to.

I longed to find someone who understood me. Unfortunately, certain individuals knew only how to cite definite rules of conduct, such as how to dress, what to say, and which foods to eat. As important as these are, it seems that it wasn’t the proper moment or the right way to address them. It seemed impossible to obtain salvation without fulfilling all those rules. Heaven seemed far away.

In time (and I say it sadly) my friendship with Jesus became superficial. My efforts were so concentrated on my attempts to become perfect that I ended up forgetting how to love and to relate to my Savior. I lived a sad life and became depressed. My mother (although now an Adventist) and friends begged me to abandon my faith. According to them, the Adventist religion was sapping my youth and my joy of living.

I reluctantly accepted the enemy’s invitations. I left the church, much to my father’s disappointment, confirming the suspicions of some regarding my sincerity in the first place. But God knew my heart.

I never enjoyed the company of my friends, for I knew it was not my place to join them. I even feared to venture into the streets, lest I die a lost person. Every Friday at sunset I suffered mental anguish as painful memories swept over me.

Once in a while, in desperation, I visited a church, longing for something in me to change. Whenever I entered a church, I felt the suspicious gaze of curious persons I knew. Sometimes their demeanor seemed hostile. I thought that salvation was unavailable to me.

But while I was astray, Jesus not only waited for me with open arms, He came to my rescue, showing how much He loved me.

Not long after I left the church, something happened to my best friend’s mother. My friend asked me to pray for her mother and to give her Bible studies. She had always been critical of my beliefs and never accepted what I told her about Jesus. But now she wanted me to seek divine help for her mother.

How could I, a sinner, intercede on her behalf?

Astonished but still rejoicing, I knelt with my friend, seeking forgiveness of our sins. It seemed as if light streamed from heaven to brighten the dark recesses of my life.

We stayed up until late at night, praying and studying God’s Word. We began attending church regularly and asked to be baptized.

Some individuals were skeptical of my conversion, doubting that I would remain true to God’s leading. But now I had Someone at my side; Someone who understood my struggles.

My friend and I prayed together and encouraged each other. During this time I became acquainted with my future husband, who also helped me to come closer to Christ. We began giving Bible studies, distributing gospel leaflets, and accepting church offices. I began to be an instrument in Jesus’ hands, further strengthening my faith.

Without realizing it, I was living up to church standards: the Spirit was bearing fruit in my life. I began to understand that when we focus our attention on doing God’s will because of our love for Jesus, obedience becomes a natural—and pleasurable—consequence of having a transformed heart.

Young people don’t always have to be reminded of right and wrong. Even though they invent excuses to explain away their sinning, they often know perfectly well how to discern right and wrong.

We need to let them fall in love with Jesus, and to be involved in His work with the support of other church members. People who are one step above in the ladder of sanctification don’t throw stones down at those who are below. Instead, they extend helping hands to those who are trying to climb the same ladder.

We shouldn’t consider persons unconverted because they do not behave as we would like them to. Far better to put ourselves in their place and offer to assist them in every possible way. As we pray for and with each other, we’ll all take pleasure in belonging to the marvelous worldwide family of the Seventh-day Adventist Church.

Débora Tatiane Borges, a freelance writer, is a member of the Boituva Seventh-day Adventist Church in São Paulo, Brazil. Her story originally appeared in Revista Adventista and was translated by Charles A. Rentfro.