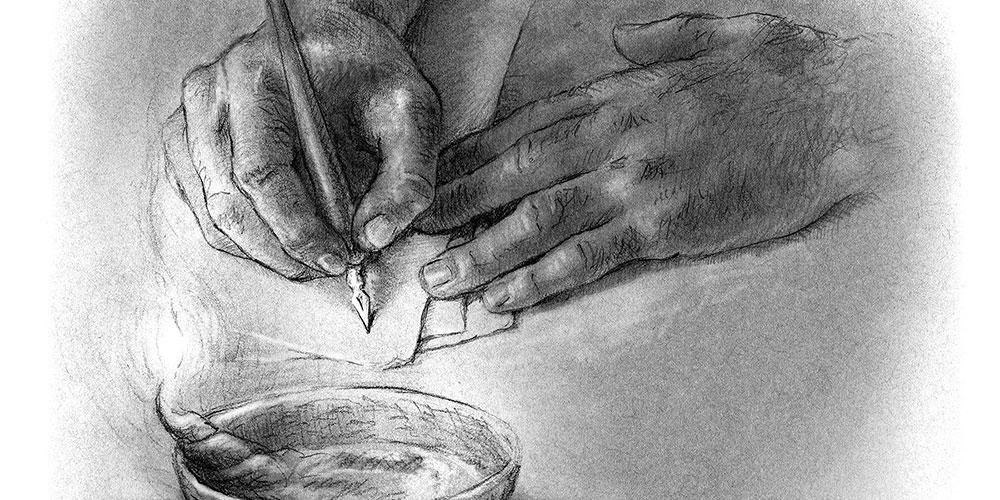 Can you picture Ellen White and her family going on vacation? Most of us picture them constantly working, writing, and preaching. We are delighted to share one of their vacation stories, as told by Arthur L. White, James and Ellen White’s grandson. —Editors.

The White family took a vacation in the Rocky Mountains. On the trip were James and Ellen White; their son, Willie, who was 18; and a close friend of the Whites, Mrs. Hall. The Whites had been working hard; they needed a change. Both had a great deal of writing they wanted to do, so they decided to spend the summer of 1873 in Colorado, resting and writing.

Life at the Lake

One day late in the summer Mr. Walling asked James and Ellen if they would like to go up to Grand Lake for a couple weeks and camp by the lake. So they got their food and clothes ready. They took some candles for light. They planned on camping by the lake for about two weeks.

At 11:00 Sunday morning they started up into the mountains. They got through the pass and started down the narrow winding road and camped for the night. Monday morning they started out again. James, Ellen, and Willie rode horses. Soon an axle on one of the wagons broke. They would have to camp there for a few days while Mr. Walling went to get the axle fixed. A week later Mr. Walling sent one of his hired men with the repaired axle to take the Whites on to the lake.

As Willie was leaving, James called after him, “Don’t forget the shotgun.”

When they got to the lake, the hired man helped the Whites pitch their tents. Soon they were all nicely settled, but already their supplies were running low. After spending Sabbath with them, the hired man said goodbye, promising to send supplies soon, or to have Mr. Walling come and take them back to the cabin.

The Whites enjoyed this beautiful place! It was so quiet, and the lake was so beautiful. They rested, and James and Ellen did a lot of writing. Ellen White was early in the process of writing her book about the life of Jesus, The Desire of Ages.

The Whites became acquainted with two fishermen whose little cabin was right by the lake. The fishermen would catch fish in nets and keep them alive until a man came from Black Hawk with horses to take the fish to market in Central City and Black Hawk.

Waiting for a Ride

James and Ellen expected Mr. Walling to get them soon, but he was delayed for some reason. James was working to revise a tract that was going to be printed at the publishing house in Battle Creek. He had promised that the manuscript would be ready by a certain time. If Mr. Walling delayed too long, James wouldn’t be able to keep his promise.

Mr. Walling didn’t come. Soon the candles were gone. So when it got dark, they went to bed; and when it got light, they got up. Another problem was food. It was going fast. They asked the fishermen to sell them some of their supplies, but the fishermen didn’t have much to spare. The Whites found some wild berries here and there, and they ate them. Some of them they made into pies, which they traded with the fishermen for other food. As each day went by, food got more scarce.

James White spent some time writing his tract. As he and Willie came back from a hike one afternoon, James discovered that men had come from town for the fish and would be leaving early the next morning for Black Hawk. He decided that he had to finish the tract and send it with them to the post office when they returned the next day. So he got his Bible and his concordance and continued working on the tract.

Looking occasionally at the sun, James saw that it would soon be going down behind the mountains. When it got dark, he wouldn’t be able to continue writing.

Then he remembered that that very afternoon, as they were out for their walk, they had seen the body of a dead wolf some distance from their camp. James thought that perhaps they could get some fat off the body of that wolf, and he could use that fat to make a light.

“Willie,” he said, “I have to have light to finish this tract tonight. It must go out at 6:00 in the morning when the men take the fish to Black Hawk. Do you remember the body of that wolf we saw out there on the trail? Take your knife, and a pan, and go to the body of that wolf and scrape off all the fat you can. I must have light.”

As Willie was leaving, James called after him, “Don’t forget the shotgun.” There were brown bears in that valley.

So with a double-barreled shotgun over his shoulder, and a pan and knife, Willie started back over the trail to see if he could find the dead wolf. He hoped that coyotes hadn’t already gotten it. But when he came to the spot, there it was. He knelt beside the carcass and scraped a little yellow fat from here, and some fat from there, especially around the liver.

When Willie had gotten all the fat he could, it was getting dark, and he walked hurriedly back to camp. James took the pan, put it over the fire, and melted the fat into oil. Then he tore up some pieces of rag. He took them, dipped them in the oil, and twisted them until they took shape. Then he laid them on the edge of the dish. He lit it. It sputtered a little, then flared up into a nice flame. James White had his light.

This story is adapted from Campfire Junior Stories From the Days of SDA Pioneers (Hagerstown, Md.: Review and Herald Pub. Assn., 2000), pp. 33-36. Seventh-day Adventists believe that Ellen G. White (1827-1915) exercised the biblical gift of prophecy during more than 70 years of public ministry.