Holding On to Guilt

Too much is bad; too little is bad. It has to be just right. 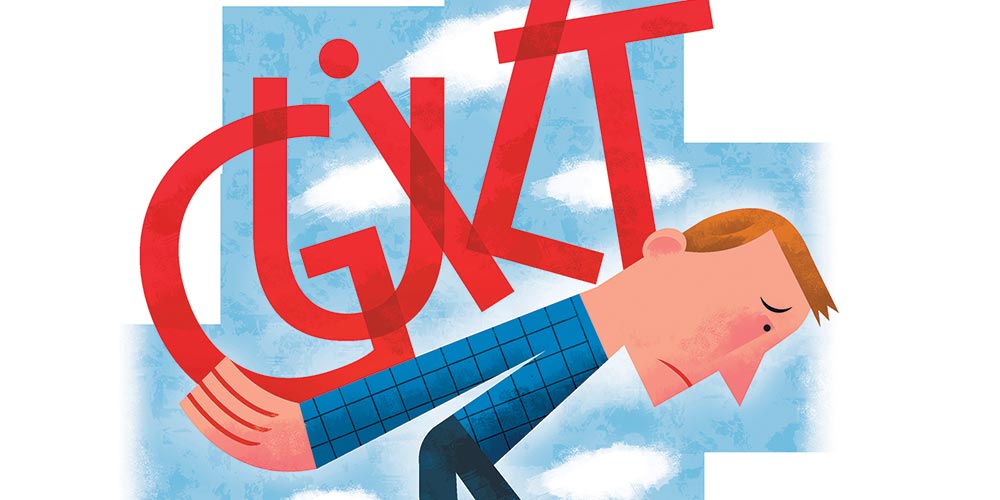 As a clinical psychologist I help those who are suffering from distressing thoughts and feelings. Feelings can be quite tricky. After all, feelings are involuntary. They originate in the limbic system of the brain and often involve a whole system response, including an action-urge, such as fight, flight, or freeze.

Feelings are closely associated with our memories; in fact, the part of our brain that is associated with memories, the hippocampus, is also part of the limbic system. This close relationship between memories and feelings makes sense. It’s important for us to remember whom we love and what we fear. Feelings place a tag on incoming stimuli that let us know, “Hey, pay attention! This is important.”

All emotions have a useful purpose. Anger can alert us to an injustice that has been done. Fear can prepare or activate us for an impending threat. Love connects us to others and strengthens our social interactions. Guilt can alert us that we have committed a wrong and propel us into acknowledging our wrong and making amends. But while emotions in and of themselves are not either good or bad, our response to emotions is not always useful.

I often hear stories from patients that highlight their painful feelings of worthlessness. Trials and tribulations of life reinforce their belief that they’re getting what they deserve. They harbor deep-seated feelings of guilt and shame that taunt them. They see themselves as irreversibly damaged, broken.

People respond to these feelings in various ways. Some lash out at the world in anger and aggression, perhaps to protect as well as fight further damage. Others put up a front, showing the world that they have their act together, but deep down inside they feel like impostors. Any tear of the mask might reveal their true damaged self. They conclude, “I am undeserving.”

When actions are based on merit, you get what you deserve. If I study hard for an exam, I expect to make a good grade. If I do a job for a wage, I expect to get paid. I am the initiator of the action and reap my earned reward.

Gifts, on the other hand, are not earned. Gifts stem from an action-urge experienced by the giver. Gift giving, however, can be fulfilled only if the gift is received.

But what if the receiver of the gift does not deserve it? Those burdened by feelings of guilt and worthlessness may reject the gift based on these feelings, concluding that they do not deserve it. To be the receiver of a gift we do not deserve is a challenge we all face. The Bible tells us, “For God so loved the world that He gave His only begotten Son, that whoever believes in Him should not perish but have everlasting life” (John 3:16).* This is the ultimate gift given out of love by God. God’s action-urge toward us was to give His own Son in payment for our sin.

We are all undeserving. The Old Testament sanctuary service provided the Israelites with a graphic, experiential practice to teach both the cost and the transfer of sin to an unblemished recipient. Sinners, in response to guilt and condemnation that come from wrongdoing, brought a sacrifice to the Temple. When the sinner confessd the sin and laid hands on the unblemished sacrifice, the sin was transferred from the sinner to the sacrifice. The transfer of guilt was ultimately borne by Christ at His death on the cross. This is the ultimate sacrifice that John the Baptist referred to when he called out to the crowd, pointing to Jesus and exclaiming, “Behold! The Lamb of God who takes away the sin of the world!” (John 1:29).

Amazingly, God sees our condition and loves us anyway. The Bible tells us, “For the wages of sin is death, but the gift of God is eternal life in Christ Jesus our Lord” (Rom. 6:23). Jesus already paid the wages of sin. We don’t have to get what we deserve. We can let go of guilt and grab hold of grace. “Therefore if the Son makes you free, you shall be free indeed” (John 8:36).

* Bible texts in this article are taken from the New King James Version. Copyright © 1979, 1980, 1982 by Thomas Nelson, Inc. Used by permission. All rights reserved.