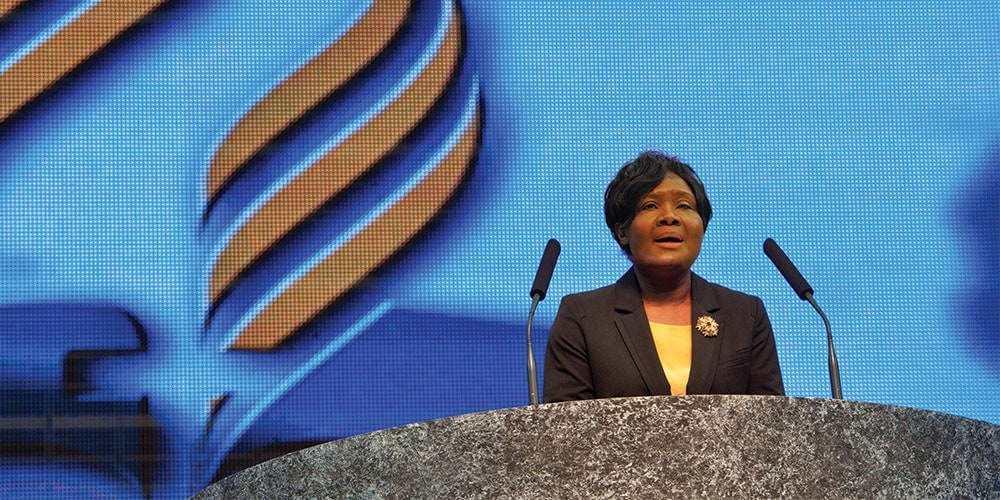 Those who have lived long enough have earned the luxury of looking back on various life events and recognizing them as pivotal moments when God seemed to be present in the choices set before them. They have to have lived for a while before they can recognize God’s leading. But when they do, the path is unmistakable.

Ella Smith Simmons, for the last 13 years a general vice president of the General Conference, can trace God’s activity in her life, and she has a profound sense of gratitude for the way He’s led.

After a career in education and education administration, Simmons was contacted by Jan Paulsen, then president of the General Conference, about joining the General Conference as a vice president. “I laughed in his face, like Sarah,” she remembers. “But when I realized that he was serious, and I gathered myself, I said, ‘Well, [my husband] Nord and I always try to do what God wants us to do. So if God were to call, if we believed God was calling, we would do this.’”

That was in 2005. Simmons’ responsibilities since then have been the same as her male counterparts, but they tended also to focus on education, her career specialty. Her tenure at the General Conference is groundbreaking because she is the first woman to serve in this capacity, and the first African American woman to serve at this level. “It’s all God,” she says, since at the time she had left administrative positions at Oakwood and La Sierra universities to settle into more relaxed educational roles.

“I felt that I was doing a service, a ministry to which God had called me.”

Was the pressure of breaking new ground a burden? “No, not for a moment,” she says. “There have been some difficult moments, but it’s never been a burden.”

Simmons’ sense of God’s calling motivated her. “I felt that I was doing a service, a ministry to which God had called me specifically.”

She’s also drawn strength and inspiration from the people with whom she interacts. “It has been such a blessed joy to meet God’s people all over the world,” she says. “And when I say God’s people, I have to say those of us who are members of the Seventh-day Adventist Church, and those who are not.”

Ella Smith Simmons grew up in Louisville, Kentucky, and also across the Ohio River in New Albany, Indiana. She was the oldest child in her family, and the only female. Her family regularly attended a Baptist church.

She became an Adventist at the age of 16. Prior to that, she began noticing things in the Bible that didn’t match what they were being taught in church. “This was before Google, of course, so I read encyclopedias and any resource I could find about the Sabbath,” she says. “I could not understand why we went to church on Sunday when they all seemed to say the seventh day was the Sabbath.”

Other things troubled her as well. She remembered seeing deacons in her church performing their duties during worship services properly and with reverence, but between services she saw them standing outside smoking cigarettes. “Now, there’s nothing in the Bible that says, ‘Thou shalt not smoke,’ but I had this deep conviction that this was wrong.”

About this time an evangelistic tent effort came to town and set up right across the street from her home. “I didn’t know what was going on,” she remembers, “but my next-youngest brother was always out and about, checking on everything, and he found out what was going on.” The evangelist, Charles Graham, hired Simmons’ brother to be his “tentmaster,” to look after the tent and its equipment when there were no meetings, even spending nights sleeping in the tent.

In an era when evangelistic meetings lasted weeks or months, Simmons remembers, “I was there with my little Bible and pen or pencil in hand. I never missed a meeting.” By the time the meetings were over, “I had each one of my questions answered.”

“I had two great loves [while growing up]: education—teaching, specifically—and research science,” says Simmons. She thought being a science professor would offer the best of both worlds.

Simmons had had a second-grade teacher who influenced her toward teaching on the elementary level. “I really admired the woman. She personified everything I thought an educator should be,” she remembers. “She was a prim and proper person who was very warm and could get down on the floor with us.”

But behind those and other childhood influences, she felt something else. “I think it was just the Holy Spirit drawing me,” she says. “While social, political, mainly sociocultural circumstances deterred me from pursuing studies in science, . . . something was drawing me to education. I believe it was just my calling.”

Simmons began her teaching career at Southeastern Junior Academy in New Albany, Indiana. That was her first direct experience with Adventist education. She wouldn’t attend an Adventist school as a student until she started work on a master’s degree at Andrews University.

When Simmons and her husband, Nord, also a teacher, began their family, she became a stay-at-home mom. But not for long.

“The woman who ran the day-care/nursery school at our local church was in an accident. . . . The pastor and others realized that I was at home . . . and they asked if I would come and fill in for three weeks while she recuperated. . . . It lasted three years.”

In that role Simmons learned leadership skills that would serve her well in the decades ahead, such as building relationships with parents, staff, government agencies, and the community. Along the way she served as director of a local Head Start program, and eventually as director of Head Start for the entire county. She also served as a junior academy principal.

“I’m very tenacious,” she says. “I can be idealistic because I hold certain ideals based on my values and principles.”

Simmons admits, however, that being an administrator brings its challenges, which she sees as opportunities. “I’m a person who likes to solve puzzles,” she says. “There was a time I was a little more like Pollyanna, and I just didn’t understand why people didn’t get along.”

As Simmons grew in her administrative skills she says she learned to recognize those challenges as opportunities for growth. “I just sort of settled into the Lord,” she says. “I said, ‘I have to do my part, but the Lord will fight my battles.’”

She embraced that philosophy then, and keeps coming back to it now. “I don’t necessarily seek to win over the other person. I am victorious when I have led in the process of a win-win solution for all those involved.”

Ella Simmons has seen a lot of changes in the church and in society during her career as an educator and administrator. When Jan Paulsen nominated her to serve as the first female to serve as a vice president in the Seventh-day Adventist Church, she didn’t expect her nomination to be approved. She had in mind less-lofty goals. “I thought this was just going to be an exercise in taking a small step forward,” she remembers. “I thought that by allowing my name to go forward, this would get the conversation going.”

During the discussion about her nomination she expected to hear statements from the floor based o
n ignorance and decades of racial and gender prejudice. Her husband, concerned that what he heard might anger him, decided to stay in his hotel room. “I came alone with a good friend who sat with me,” she remembers. The vote approving her appointment “happened so quickly we couldn’t believe it.”

Simmons’ leadership as a general vice president of the General Conference is what one would expect from a vice president: capable, stable, and supportive. To the general church membership, she’s most visible when chairing one of the business meetings of a General Conference session. But she also travels around the world, chairing boards and committees, and offering counsel on a wide range of topics.

As she looks back on her life, Simmons glimpses hints of leadership at an early age. It often seemed as if neighborhood children looked to her as their childhood games were organized. In Sabbath school, and at special church events such as Bible bowls, she was asked to help organize and lead out. “I would almost reluctantly accept whatever role I was asked to take,” she says.

That willingness to serve has elevated Simmons to one of the highest levels of administration in the Seventh-day Adventist Church. From this perspective she recognizes two realities: “One, that God can use a woman to do anything He calls a woman to do.

“Two, God can use individuals whom He has prepared in His own way.” She acknowledges that not growing up in a Seventh-day Adventist home, and not going to Adventist schools, makes her unique among most of her colleagues in administration. But when her career goals led her toward education, “God would always press me into administration. God had work for me to do.”