It will be here before we know it; but we don’t have to be afraid. 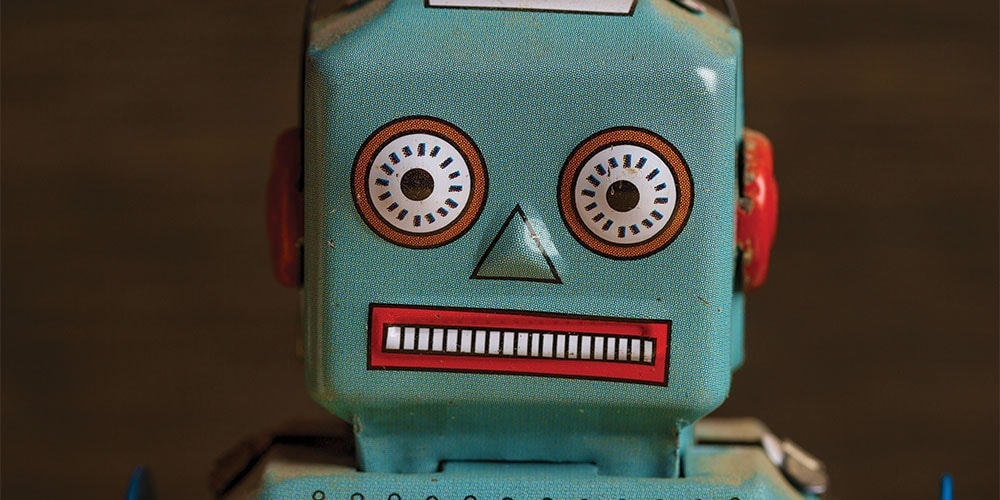 I was 20 years old when I first took an inventory of my grandfather’s life. When I realized his birth year was concurrent with the beginning of World War I, my mouth fell open in silent awe.

I recalled the stories of his childhood: the amazement of children watching “motorized buggies” grumbling down roads of hard-packed Georgia clay; the awe of grown men standing motionless in fields, eyes turned heavenward to glimpse a biplane flying overhead. Life, like adventure, appeared simple. Armed with just three items—a slingshot (fun), a sandwich (sustenance), and a few pages of the Sears and Roebuck catalog (hygiene)—he often traipsed through familiar woods and ambled down unknown trails.

Could he have ever conceived of how the world would change in his own lifetime?

By the time my grandfather passed away in 2014, an abbreviated newsreel of major events affecting his world included women’s rights (the vote), the Great Depression, World War II, the Korean War, the moon landing, Vietnam, civil rights, the beginning and end of the cold war, the Gulf War, September 11, the war against terrorism, and the great recession. Technologies emerged that transported him from horse and buggy to flight, from radio to television, from written letters to telephone, cellular, and Internet, from slow to fast, from real to virtual, and, increasingly, from inconvenience to convenience.

Not only did the world shrink in size, but society appeared ready to burst at the seams.

Through it all my grandfather never appeared worried or uncertain. I often wondered, How come?

Fear of the Future

For those who are nostalgic, yesterday allures with its definition and perceived security. We forget that 20/20 hindsight sometimes suffers from myopic vision. As a result we see the past as a vague outline of sanitized cultures and events, slowly unfolding, devoid of uncertainty. To its contemporaries, however, history has never appeared so affable.

In so many cases Grandpa demonstrated a peace that passes understanding.

Just 50 years ago the tumultuous events of 1969 resulted in some calling it “The Year That Changed America.”1 It was a year of “landmark achievements, cataclysmic episodes, and generation-defining events,”2 a small sampling of which included the Santa Barbara oil spill, Cuyahoga River fire, People’s Park student riots, Stonewall LGBTQ riots, Apollo 11 moon landing, Woodstock Festival, Manson Family and Zodiac Killer murders, Days of Rage demonstrations, sentencing of Sirhan Sirhan, initial withdrawal of troops from Vietnam, Hurricane Camille, and the start of the trial of the Chicago Eight.

It may be no coincidence that the book Future Shock, by Alvin Toffler, was released the very next year, 1970. The term future shock points to the stress and disorientation caused by the rapidity of societal and technological change. The authors posited that society was gripped by a type of paralysis caused by the rapid shift from agrarian to industrial to postindustrial economies.

The authors also presciently surmised that the next major shift would be to an information age. Though some have accused the book of being a loosely bound collection of wild guesses, many of its conjectures proved startlingly accurate. For Bible-believing Christians, however, the rapid increase of knowledge and its corresponding change had already been foretold (Dan. 12:4).

Ever since sin entered the world fear, selfishness, and the law that all things fall apart entered with it. From Adam and Eve witnessing the first scenes of death and decay, to Noah’s warning of a worldwide flood, to the prophet Habakkuk questioning God’s justice in the face of widespread evil, to the martyrs of the Dark Ages, those standing at the edge of history have watched earth careen from one crisis to the next.

In this context, today simply threatens larger doses of yesterday’s turmoil. How, though, are we to maintain hope?

Peace in the Promise

The secular world recognizes its need of hope. In an article entitled “The Necessity of Hope,”3 Stan van Hooft claims that without hope there would be no impetus to seek the betterment of our lives and to show benevolence toward others. He states that goals and aspirations would be pointless; a life fully lived would be an impossibility. He further describes six of hope’s key features: hope (1) is based on a felt need, (2) implies a judgment that what is hoped for is morally good, (3) is directed at an outcome that cannot be achieved alone, (4) will lead to appropriate action by those who hope, (5) is rational and realistic (not mere wishful thinking), and (6) requires trusting one’s fate with other powers—supernatural, people, systems, or otherwise.

Intentionally or not, this comprehensive definition of hope amounts to a clear statement on faith as declared in the Bible: “Now faith is confidence in what we hope for and assurance about what we do not see” (Heb. 11:1). Although God has provided temporal promises to His children, the book of Hebrews focuses on the promise of salvation and restoration in the person of Jesus.

In His wisdom and mercy God offered hope of reconciliation from the moment we sinned (Gen. 3:15). He reconfirmed the promise in His covenant with Abraham (Gen. 12:1-3; 15:6-21) and made it a focal point of Israel’s worship in the sanctuary blueprint. His longing has always been to dwell with us once again (Ex. 25:8).

Though the promise tarried, God reaffirmed His faithfulness to patriarchs and prophets that “it will certainly come” (Hab. 2:3). Even as the oppressor weighed heavy upon earth, Jesus came at the appointed time (Matt. 1:20-23).

As our confidence and our example, Christ accomplished for us what we cannot do for ourselves. Just as our ancestors pointed to the promise of His advent, we point to the promise that He will return (Heb. 11:39, 40).

Watchers on the Wall

God has set us as lookouts upon the wall of the world (Eze. 33). As colaborers with Him, we share in His mission to seek and save those who are lost and despairing. That we might fulfill our service and calling to be a blessing to the world, He has revealed His momentous movements to His people (Amos 3:7).

Jesus Himself highlighted the signs, calamities, and distresses that would signal His return (Luke 21:25-28). He has gone before us and prepared the way to ensure that we are not “future-shocked.”

The Seventh-day Adventist Church was called into existence for such a time as this, that we might share with all our God-grounded hope in these end times. Though for the saved Christ’s return is attended by rejoicing and gladness, all will face the fearful question “Who shall be able to stand?” (Rev. 6:17, KJV).

What does this mean? Are we to become wild-eyed prophets, warning others of their imminent destruction? Even if it is perfectly presented, will people hear our message of preparation for Christ’s soon return? The mere sharing of information will prove much too inadequate.

According to a recent Forbes magazine article, we now produce more than 2.5 quintillion (2,500,000,000,000,000,000) bytes of data each day.4 We have produced more than 90 percent of all of the data and information in the world’s history in just the past two years!5 In 2011 average Americans processed the equivalent of 100,000 words per day in just their leisure time.6 Though our brains are able to sort through astonishing amounts of information, sheer volume has made it more difficult to separate the trivial from the important. Information overload has become a real phenomenon.

Although we have a vital message to convey, the church is left competing with every Snapchat post, YouTube video update, news article, Instagram photo, LinkedIn connection, Tinder swipe, Facebook message, text message, e-mail, WhatsApp chat, phone call, television show, and Google search, along with day-to-day responsibilities, for just a small slice of an individual’s attention. God be praised: He has provided us with a way of making an impact!

We all have a special set of neurons in our brains, mirror neurons. The American Psychology Association describes these neurons as “a type of brain cell that respond[s] equally when we perform an action and when we witness someone else perform the same action.”7 In other words, to these neurons, witnessing an action is the same as performing the action. This discovery may provide additional insight into the verse “And we all, who with unveiled faces contemplate the Lord’s glory, are being transformed into his image with ever-increasing glory” (2 Cor. 3:18). It strongly suggests that our choices in entertainment and fellowship contribute significantly to the shaping of our characters. With the discovery of these magical neurons, parenting guides have begun to emphasize to an even greater degree the importance of demonstrating for children to “do as I do.”

Similarly, our impact upon the world depends upon the example we set. We move in an atmosphere created by our thoughts and actions, and time spent with our heavenly Father. Just as more than 90 percent of communication is nonverbal, what we do, more than anything else, provides the testimony of Christ in our lives. As a result, our success depends upon one question: “Have I put on Christ?” (Col. 3:12-17).

Jesus drew near to those who were downtrodden and suffering. Surrounded by the atmosphere of heaven, in the midst of those who were sin-infected, He ministered to those broken in spirit and healed their wounds. His actions reflected the love of His Father to such a degree that when He spoke His hearers experienced power and conviction in every word.

In the same way Jesus commanded us to follow His example: “Therefore go and make disciples of all nations, baptizing them in the name of the Father and of the Son and of the Holy Spirit” (Matt. 28:19).

Ellen White wrote: “At this time the church is to put on her beautiful garments—“Christ our righteousness.” . . . The Lord Jesus is making experiments on human hearts through the exhibition of His mercy and abundant grace. He is effecting transformations so amazing that Satan, with all his triumphant boasting, with all his confederacy of evil united against God and the laws of His government, stands viewing them as a fortress impregnable to his sophistries and delusions. They are to him an incomprehensible mystery.”8

If such re-creation of the heart mystifies Satan, how might the same witness influence the world?

Nothing to Fear for the Future

As I think about my grandfather, I remember both his qualities and his flaws. After he joined the Seventh-day Adventist Church at middle age, he continued to struggle against his defects.

Yet in so many cases he also demonstrated a peace that passes understanding (see Phil. 4:7, KJV). That came from his connection with, and faith in God. Grandpa was not future shocked.

Jesus, through His divine power, has given His church everything we need for life and godliness (2 Peter 1:3). We are His living testimonies. Remember then, when trepidation threatens regarding what may come: “We have nothing to fear for the future, except as we shall forget the way the Lord has led us, and His teaching in our past history.”9

Greg Milton is a director of project management for Piedmont Healthcare in Atlanta, Georgia.