​Forty Dollars and a Prayer 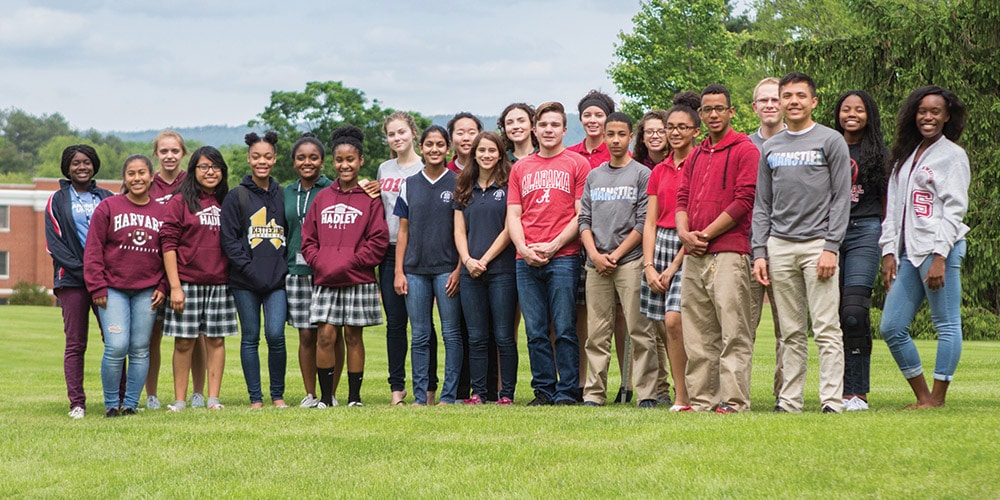 It was a reunion—of sorts. Nearly 10 years after their 1982 graduation from Shenandoah Valley Academy (SVA) in New Market, Virginia, Tony Williams, Scott Handel, Byron Greenberg, and David Reile reconnected in Maryland and spent an evening eating pizza and playing Rook. They began sharing memories of their academy years and recounting blessings such as lasting friendships. Then one of them (there’s no consensus on which one) said, “Let’s give something back. What can we do?”

With no clear goal in mind they decided to open a bank account and figure out later what to do with the money. All four former SVA students were now in their mid-20s and just beginning their careers and families, so money was tight. They checked their pockets, and each pulled out $10. They gave the money to Handel, a CPA, to set up the account—and so in August 1991, with a prayer for God’s blessing and only $40, the GHRoW Foundation was born.

“We were just four guys who wanted to give back to SVA,” says Williams, an engineer living in Columbia, Maryland. “We didn’t really know what we wanted to do; we just knew we wanted to do something for the school that had blessed us. So we started to send Scott small amounts of money periodically to add to the account.”

“The initial core energy that produced this was from a desire to remain connected with each other,” adds Greenberg, a licensed clinical psychologist and a tenured university professor in Virginia. “We loved each other and wanted to stay connected and to have our relationship produce something meaningful.”

In 1993 the group became incorporated and applied for 501(c)(3) nonprofit status. To do this they were required to have a name, so they came up with GHRoW Foundation.

“Except for the ‘o,’ which is lowercase, it comprises the first letter of each of our last names,” Williams explains. “We were the only ones involved at the time, so we thought it was kind of clever.”

In 1994 the four men felt they had accumulated enough money—about $1,500—to begin a merit scholarship program for SVA students, so they worked with the school and created an application process. The merit scholarship is need-based and designed to help students throughout their time at SVA.

The first and only GHRoW recipient that year was Sarah Axmaker Coulter. Today Sarah and her husband, Todd, are educators living in Texas, where Todd is the new principal of Keene Adventist Elementary School.

“GHRoW is more than a scholarship; it’s a network, a family, a community of people working together to support Adventist education,” Coulter says. “God has put various people in my path to help build me for where I am today, and GHRoW is one of those supports.”

Sadly, tragedy struck the group with the death of Scott Handel on December 3, 2008. He was 44 years old, owned and managed his own accounting firm, and served as the head treasurer of the Spencerville Adventist Church in Maryland. He was married to Kim Hegstad, also a graduate of SVA, and was the father of two daughters.

“Doctors discovered that Scott had a brain tumor about 10 months before he died,” says Williams, who roomed with Handel during their years at SVA. “It was a very tough time. We created an endowed leadership scholarship in Scott’s name. He was a natural leader, so it seemed appropriate.”

“Receiving the GHRoW scholarship increased my faith and made me value the gift of giving,” says Umaña, who now has a bachelor’s degree in mathematics and is currently working toward a master’s in education. “I received the scholarship at a time when I wasn’t sure if my family could afford to send me back to SVA because of my father’s impending medical needs. Because God answered our prayers through people like those from the GHRoW Foundation, I now feel the burden to also help someone else.”

Twenty-five years after beginning with just $40, GHRoW has awarded more than $400,000 in scholarships to SVA students, with scholarship endowment funds exceeding $100,000. Some 12 to 14 students receive money from GHRoW every year.

Reile, a licensed counseling psychologist living in Olney, Maryland, and chair of the Olney Adventist Preparatory School board, says he didn’t envision the organization growing to the extent that it has.

“I expected it to expand,” he says, “but not necessarily to reach a half million dollars in 25 years. God has truly blessed.”

The contributions to SVA haven’t gone unnoticed by the teachers and administrators. Three-time SVA principal Dale Twomley notes not only the financial awards but also GHRoW’s commitment of time and personal support to the students.

“The GHRoW Foundation and board members come to the school and take the scholarship students out for pizza. They send them birthday cards—they’re involved in nurturing and looking after these kids on a regular basis. So it’s not just the money,” Twomley says.

He adds that the GHRoW scholarships are an important piece of the total financial aid provided to SVA students from all sources.

“It makes a big difference in closing the gap,” he explains. “These kind of efforts by church members and alumni and everyone else are very, very valuable.”

Reflecting on the GHRoW experience, Greenberg says the original four founders recognized early on that SVA had brought them together and that Adventist Christian education helped to build their worldview.

“It is the paradigm that we share,” he says. “And we realized how important it could be to others who were coming into the ranks as well. We have incorporated much of the habits, if you will, such as shutting down on Friday at sundown. And just the peace—you can’t measure that. You can’t fully understand the impact on your psyche, because it leaves its fingerprints all over you.”

Reile goes even further when considering the impact of the school.

“SVA, quite honestly, literally and spiritually probably saved the lives of all four of us,” he says. “All of us had family experiences that were not necessarily the best. Three of the four of us came from single-parent homes with absent or not very good fathers. And coming into an environment like SVA, where we not only had the opportunity to be in a safe Christian atmosphere but also to experience the kind of connection with each other that we had, helped to strengthen our own relationship with God, with Adventism in general, and our commitment to a relationship with God. It was because of those reasons that we really wanted to start this. So I would say that GHRoW didn’t change my life. It was because my life was changed that GHRoW was started.

“God’s blessing of $40 and turning it into a half million dollars to help students benefit from a Christian education really has nothing to do with the founders,” Reile adds. “It’s all about what God has done.”

Noting the group’s financial need as students at SVA, Williams says he’s grateful to people he didn’t know who helped them at the time to fund their tuition.

“They invested in us, and our appreciation for that is part of the reason GHRoW exists—to give back,” Williams says. “People who consider investing in Adventist education today—through their local church, through schools directly, through GHRoW—are making a difference. And many of those students helped today will then help the next generation. The investment in eternity is much greater than they might imagine.”

To learn more, go to www.ghrow.org.