After 26 years, the memories are still fresh. 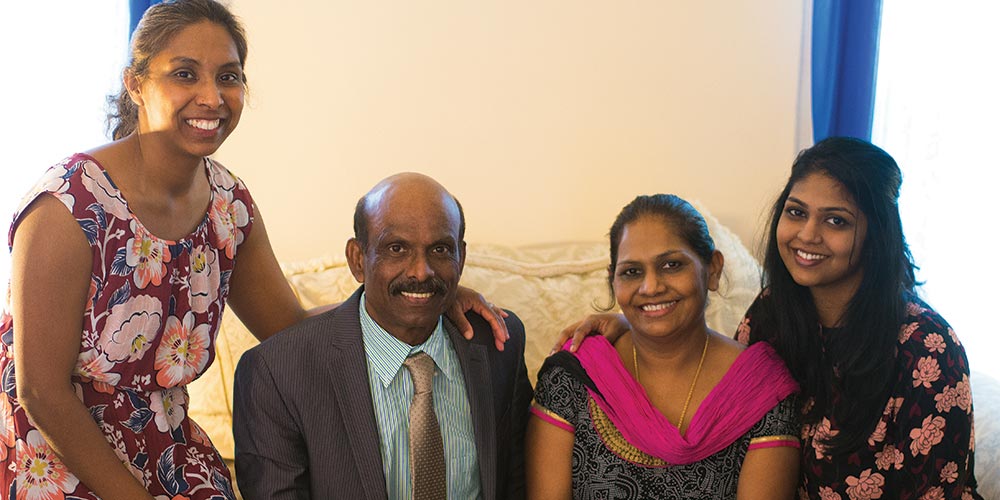 It was 5:00 a.m. Ratna Samuel, a young Adventist mother, wife, and nurse was brushing her teeth, preparing for work. Her little girls, ages 9 and 4, were still sleeping, and her husband would soon rouse from his slumber to drive her to work that day.

“I heard thunder,” Ratna said. “[In Kuwait], we never heard anything like that. I said, ‘What is that noise?’ ”

The Samuel family lived in an area called Ahmadi, associated with the Kuwait Oil Company, where both she and her husband, Pushparaj, were employed as nurses. The crime rate there was so low that even the sound of police car sirens was foreign. So even the sound of thunder, at that hour, was very strange.

Driving to work, the pair noticed the large telecommunications tower, so integral to modern Kuwaiti life, had been knocked down.

Ratna began her workday preparing to administer insulin injections to diabetic clients before the formal start of her shift. But she soon noticed something out of the ordinary. “The Kuwaiti patients were coming in for insulin, yet everyone was gossiping in the corners,” she remembers.

At first she didn’t bother with it. “Then I asked someone, ‘What’s going on today? Why are people whispering?’ Then someone told me: Iraq is here already.”

In the 1980s Kuwait, a tiny yet wealthy country, provided opportunities for many Indian nationals to come there to live and work, enjoying a comfortable lifestyle supplied by the lifespring of the nation—oil. Pushparaj went first, gaining employment as a nurse with a clinic associated with the Kuwait Oil Company. Ratna joined him a little later, soon after completing her nursing education and securing her necessary certifications. Their little girl, Veena, joined them later, with Tina’s birth completing the family in 1986. By their account, they had a great life. Employees in the oil sector, which was literally surrounded by oil wells, were provided safe and comfortable housing, and the Samuels used their income to build a lovely home for themselves back in India for their eventual return. The family enjoyed trips to Cyprus, Egypt, and the Holy Land with relatives, and they treasured worshipping with the small community of Adventists in the area, many of whom were in Kuwait under the same circumstances. Life was good.

Ratna knew of no real warning that an invasion was imminent—just an ominous threat over oil conflicts from Saddam Hussein on August 1, 1990, saying that the next day (August 2) the Iraqi army would have breakfast in Kuwait.

“Before all this happened, I was just a pastor’s daughter.”

As soon as she heard the news of the invasion, Ratna called her husband. “We are under siege,” she told him. “Go, go, go! Tell everybody.” Pushparaj “then called his brother, everyone, and they ran to buy supplies, withdraw our money, and all that. There was a big commotion.”

For the next few weeks the family tried to figure out what to do next. Pushparaj continued his night shifts at his clinic, now used to cater to Iraqi soldiers. While he and other male friends worked, the women and children would gather in one home for the night. Tales of Iraqi soldiers forcing their way into random homes, assaulting women, and plundering houses emerged quickly. But the Samuel family and their friends were untouched.

“There was this time we were home and my dad went to work,” recalls daughter Tina. “There were tanks on the street outside, and we could just hear shooting and all kinds of stuff. My mom was praying, just praying. Then someone started banging on the door! It was my dad, but we didn’t know it was he at first. He was trying to get inside because there was shooting. We thought it was soldiers, and my mother was just crying, and praying, and praying.”

Iraq and India had enjoyed peaceful diplomatic relations before the war. As a result, the large Indian community in the country were in a better situation, safety-wise, than their Kuwaiti neighbors. But within two weeks grocery stores were ransacked and it became increasingly difficult to get supplies, especially for families with small children. “We decided it was no longer safe to stay. We didn’t know at what point America was going to come to the rescue, and didn’t know what to do if our safety was no longer there. We needed to leave,” says Ratna.

At first the plan was to drive from Kuwait to Basra, Iraq, to Iran, then to Pakistan and on to India, recalls Pushparaj. Their trek involved a small Toyota Corolla, packed to the roof with as much as they could carry, and two little girls in the back seat. Five families formed the fleeing caravan.

On their first attempt, the border was closed! “They said it was open, but before we reached the place, it was closed. We waited for three days in Basra, on the roadside,” says Pushparaj. The roadside actually bordered the Euphrates River, which served as a place to bathe and, for the kids, to play. There was also a Sheraton hotel across the road that graciously allowed the group to use its bathrooms. There were two more attempts made to cross; then the group realized this option was too risky.

The Indian government began an operation to get their nationals out in what became one of the largest airlifts ever accomplished—involving more than 100,000 civilians evacuated. Within this group were the Samuels and six other Indian Adventist families. “We had lost hope,” remembers Ratna. “There was no more going by car, but the Indian embassy gave us another option because we had small children.”

The family boarded school buses bound for Basra, Iraq. From there they would travel via Indian Air Force military planes to Bombay. They were instructed to carry just 15 pounds of luggage—for a family of four. So into a small black carryon bag went their money, documentation (including work certifications for India), photos, food for the girls, and gold, which Ratna tucked into pockets of her jeans.

Multiple planes were supposed to be ready to take the evacuees to India, but for some reason, only one plane arrived that day. Throngs of fleeing Indian citizens waited in the airport, which was essentially nonfunctioning, unsure of what to do. Finally, the decision came down that just women and children could go, but everyone refused. So now, in order for the flight to leave with all passengers on board, all luggage had to be left behind.

In the exhaustion of the past several days, Ratna failed to tag that important little bag, and left it on the tarmac. With minutes to go before takeoff, she realized her mistake and sent Pushparaj racing off the tail ramp of the military plane to the piles of luggage for that precious bag.

But he got the wrong one.

“We were sitting in the plane, and it was taking off and I was crying,” says Ratna. “I didn’t know how I’d be able to go home. ‘Jesus,’ I prayed. ‘How can we go home with nothing in hand? At least the certificates, something.’ I was crying and crying and praying, ‘Jesus, please.’ ” But the plane left Iraq and winged its way east, toward India.

Then, one hour into the flight, the pilot announced a technical problem and that they were going right back to Basra! “I said, ‘Jesus, this is Your doing, I know it is,’ ” remembers Ratna. “I was so happy. We could have landed in some other country for this technical fault, but we were going all the way back to Basra, where all our things still were.”

Another miracle awaited them—all the luggage left behind had been placed securely in a room, left unharmed. So the little black bag was secured. This time, more Indian Air Force planes were waiting with enough room for everyone and all their luggage. On landing in Bombay, they learned that the Indian government was providing 5,000 rupees, and free airline tickets to anywhere in the country, for all its citizens fleeing Kuwait.

After about a year in India the Samuel family returned to their Kuwaiti home. Once Iraq was defeated and regular life resumed, Pushparaj was called back (as nurses were needed), and the whole family followed. They stayed in Kuwait for several more years until the girls were older, before emigrating to the United States, where they now reside in Maryland. Veena and Tina are married with children of their own now, making Ratna and Pushparaj, who still work as nurses, the proud grandparents of four.

The experience, while harrowing, will never leave them. But now it serves best as a profound reminder of God’s faithfulness to His children.

“Before all this happened, I was just a pastor’s daughter,” says Ratna. “We did the routine things, such as going to church, etc. But I really, really saw the hand of God during this time. It was God’s protection. We were safe and taken care of. And when we went back, life was normal again.”

Wilona Karimabadi is an assistant editor of Adventist Review. She is also the editor of KidsView.