Recalling times—just a few of them—when women made the Adventist Church better. 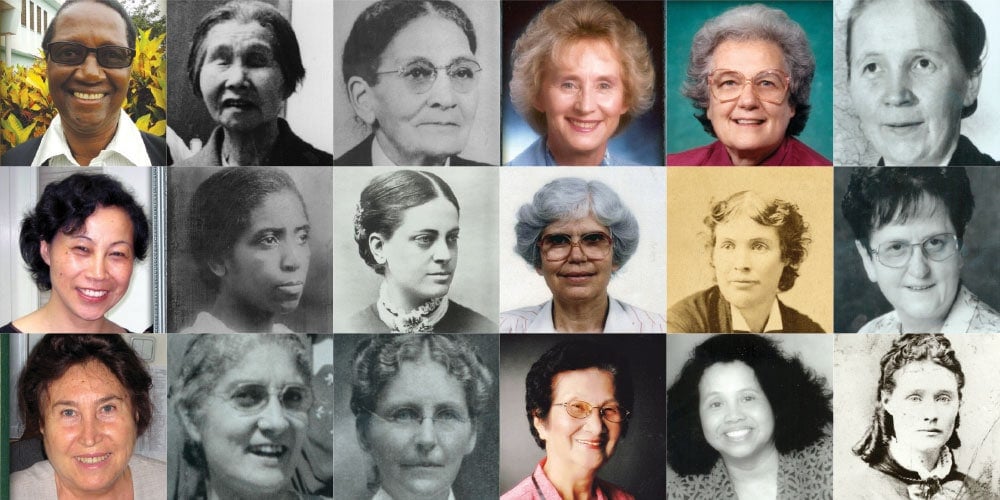 If you were to visit the Women’s Ministries Department at the General Conference of Seventh-day Adventists in Silver Spring, Maryland, you would find a wall dedicated to Adventist women who lived from 1844 to today. The wall is filled with pictures of and information about these women who gave their lives in service to God and His church—God’s superwomen of their time.

Much as the book of Hebrews lists heroes of faith along with significant features of their lives, we offer our own list of women who were champions for God.

Maud Sisley Boyd (1851–1937) was a Bible instructor, colporteur, educator, and the first unmarried missionary to Europe. She also served in Africa and Australia.

Nellie H. Rankin Druillard (1844–1937) served as a financier and treasurer in the founding of the Riverside Sanitarium, Madison College, and Emmanuel Missionary College. She was also a missionary to South Africa.

Ai Araki (1890–1982) was a Bible worker, a church leader who never let her blindness stop her work for the church throughout World War II. Her faithfulness helped preserve the only Adventist congregation that remained intact in Japan throughout the war.

Lottie Blake (1876–1976) was the Adventist Church’s first African American woman physician. Her distinctions include establishing a School of Nursing at Oakwood College, treating Ellen White, and missionary service with her physician husband in Central America and the Caribbean.

Anna Knight (1874–1972) was the first Adventist African American woman missionary to India, the first Black missionary of any Christian denomination to India. In the United States she worked as an educator, nurse, and conference and union conference departmental secretary.

We may mention several more from this period: Ana Rosa Alvarado, Cuban pastor, evangelist, educator, and musician for 45 years; Nancy Bassham, of Thailand, an educator and the first family life and women’s ministries director in the Asia-Pacific Division; Elsa Luukkanan, Finnish evangelist and pastor; and Margarete Prange of Germany, pastor, evangelist, and a member of Adventism’s 1989 Women’s Commission.

Miriam de Azevedo Berg was an educator and frontier missionary in Mozambique, as well as a mentor, and children’s ministries pioneer in her native South American Division.

Russian evangelist and church planter Olga Murga,pioneer in women’s ministries, is responsible for 3,038 people being baptized.

Elizabeth Sterndale, registered nurse and president of the Association of Seventh-day Adventist Nurses, was the first women’s ministries director in the North American Division and a division field secretary.

Agness Bakuluma Chirwa, known in Zambia as “mother general” because of her leadership qualities in evangelism, education, and business, was her division’s first volunteer women’s ministries director.

Consolacion Tauro, leads the church in the Philippines in multiple areas as elder, preacher, educator, and women’s ministries pioneer; she gave 47 years of her life to service in the Southern Asia-Pacific Division.

When I first saw the women’s wall of fame, I felt inadequate to carry out the work God had called me to do. These women seemed bigger than life. But as I thought more about them, I realized that they weren’t much different from women of today. I don’t think they knew beforehand what God would do in and through their lives. I’m sure they had insecurities and doubts, struggled spiritually, and faced many challenges in life. Yet they pushed beyond what they thought possible because of whom they served. God had called each of them, just as He calls His daughters and sons today.

He called us to salvation and to service, not in our strength, but in His.

Paul writes that we are called to “lives worthy of God, who calls you into his kingdom and glory” (1 Thess. 2:12). And Peter emphasizes: we are “a chosen people,” God’s own possession, called “out of darkness into his wonderful light” (1 Peter 2:9): this call is to the privileges of salvation.

But the call to salvation is equally the call to serve, a call “to be free,” not to satisfy our sinful nature, but to “serve one another humbly in love” (Gal. 5:13).

Each person in God’s end-time church has been called to salvation and called to serve. The way we serve may differ by gender, means, or location. What matters is our willingness to surrender to God to be used by Him, however and wherever He knows will be best. He calls. What is our answer? The hall of fame in the book of Hebrews celebrates young and old, male and female. We can all be saints of distinguished service because we have answered God’s call and surrendered to His will for our lives. God in me and God through me should be our cry.