Hers was a voice that readers trusted; she wrote what was on her mind. 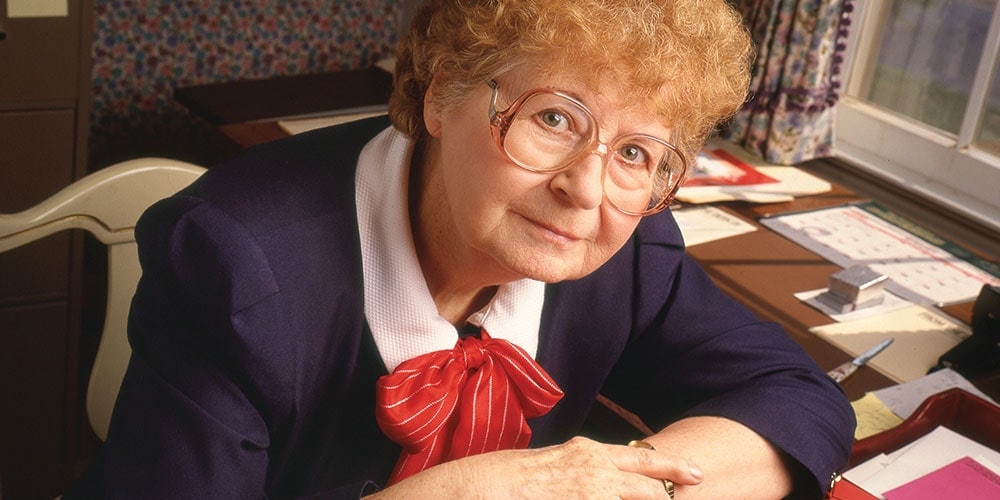 In 1982 William Johnsson, Adventist Review editor, invited Miriam Wood to write an advice column. Wood, no stranger to writing or the Review, had been a columnist for almost 20 years before. But offering advice? It was a challenge that intrigued her. What commenced was a 12-year ministry answering questions that ran the gamut from the heartfelt to the ridiculous. If they wrote, she answered. She received about 150 letters per month, answering each personally and always on a typewriter. While they all didn’t appear in print, they all were answered. Here’s a sampling:

Our family is in the midst of a crisis. Our children are grown and had left home, but now, because of economic factors, they all moved back with us again. . . . I feel like packing and disappearing. (March 1983)

Do you know any single Adventist girls aged 20-26 who would be good candidates for wives and haven’t yet met their prince charming? (April 1983)

Please give me a firm definition of what it means to be worldly. I want you to prepare a list of “do’s” and “don’ts” in detail. (May 1983)

I’m not sure that you’ll be willing to answer this question. Why are there no ordained women ministers in the Adventist Church? (June 1984)

My wife and I need a little argument settled. I say there will be some form of taxation in heaven and the new earth. My wife says no, God will take care of everything. . . . Do you have any thoughts? (February 1989)

Her answers were succinct, friendly, but direct and to the point. She shied away from nothing, and in some cases she put people directly in their place.

At the present time I, who am single, am involved in a very rich and rewarding romantic, sexual relationship with a married man. . . . I feel that we have brought great blessings to each other. I wish we could be married, but I know he will never leave his wife and children. But we are certainly not hurting anyone, since his wife does not know and, we hope, never will. We are both church members in good standing. I suppose you will say such a relationship is wrong. (July 1989)

“Of course it’s wrong. Moreover, I believe it is a sin in the eyes of the Lord. Think not only of the seventh commandment but also the eighth. Aren’t you stealing a great deal from the wife and children of your unadmirable paramour? Aren’t you stealing time that belongs to them, the emotional energy of your other, which belongs to his family? . . . What do you mean when you say you are in good standing in the church? Have you asked the Lord’s opinion on that?”

At times she wrote with an exceptional level of sympathy.

I am writing with a heavy heart, but I want you to know that I love the Adventist Church and will never leave it, even though I feel so rejected and lonely that at times I can hardly endure it. I am a lifelong Adventist, but my husband is not. . . . But the members in our small rural church will not associate with us. . . . We have tried so hard to be friendly, but nothing happens. (May 1984)

“Few letters have touched my heart as deeply as yours. If only I had the gift of miracles so I could create for you the climate of love, warmth, and understanding that you long for and need so badly. It is difficult for me to grasp the fact that such lack of love and kindness has been shown you through so many years of faithful membership. I cannot understand or explain it. I can tell you only that I am very sorry and that I care.”

A postscript to the letter above was published two months later. An avalanche of letters from readers for the individual came to Wood. She sent the letters on; the messages greatly encouraged the individual. The member found another church, and her husband was, at that time, considering attending. Such was the impact of this column and its author.

Wood fielded questions on church leadership, pastors, even the General Conference president. During a particularly stressful financial period of the church, she received this letter:

I have decided not to pay my tithe in the regular channels. Can you give me any suggestions as to what to do with it? (April 1983)

“Every thinking person is brought up short at times by disturbing events, and questions the basic assumptions on which he had always operated his life, religious and otherwise. . . . It seems to me that if ever there is a time when tithe and other funds will be properly used in the church, it is now and in the future. I can assure you that every facet of church finance is being scrutinized so carefully that nothing will remain hidden or the same mistakes made again. . . . Would I continue to pay my tithe into the regular channels? Yes.”

Sometimes this brought into question whether she was simply giving the party-line.

Recently [several people] insisted that you have absolutely no freedom to say what you think and that any deviation from the “party line” would result in your being fired. Is this so? The truth, please.

“Your letter gave me a much-needed chuckle for the day. How do you fire someone who isn’t receiving a salary? . . . When I was asked to conduct this column not one word was said to me about parameters. . . . My answers are my own—they are not cleared by anyone else. . . . Therefore, as you think of me at my typewriter, strike off those imaginary chains. The only constraints are my own, and I hope and pray that the Lord will always impress me forcibly if I am typing down a path that would hurt rather than build up the church.”

Wood was asked several times what questions surprised her the most or which topics appeared most frequently.

“I don’t think I have received any major surprises,” Wood wrote in December 1983. “But the aspect that has saddened me most is the absorption of so many people in monitoring the conduct of others and in fiercely defending their own pet practices and customs. I get the feeling that the great principles of salvation often are buried beneath this mountain of fretful concern.”

Two years later she wrote, “I am finding that many church members spend their lives suffering with the most intense guilt over sins they committed when they were young, and they simply cannot accept the fact that though they have sincerely repented and begged the Lord’s forgiveness, Christ has really forgiven them.”

Her final column in December 1994 reveals her conclusions for the church: Be kinder to one another; resist setting up your own list of do’s and don’ts condemning those who deviate from them; build strong Adventist homes; and, as conditions and customs change, decide what really matters.

It has been 25 years since Miriam wrote one of her columns. Yet if you spend time reading through them, you will find that not much has changed with people or the church. I can only hope there are more “Miriams” out there—prayerfully contemplating answers to questions deciding first to love one another and then to determine what really matters.

Merle Poirier is operations manager for Adventist Review Ministries, as well as the designer of KidsView.

Dear Miriam: I just got my first job after college graduation. I thought it would be fun and exciting, but it’s boring to work. What do you suggest?

I’ll compose a parable for you. Once upon a time there was a race of human beings. They had wise leaders who instructed the young, preparing them for worthwhile lives.

The good teachers said, “God did not intend that life be lived in a euphoric haze. After sin, He intended that human beings get immense satisfaction from worshipping Him, from doing their best, and from contributing to the world around them. They were not to be merely consumers, but contributors.”

So the crops were planted, the streets were clean, the houses were tidy, the offices hummed, the schools turned out educated, disciplined young people, and the churches were full of loving, satisfied worshippers.

But then other teachers arose and said, “Lo, life should be all fun and games. Everyone has a right to feel terrific all the time and never be bored. A human being should look in the mirror many times during the day and ask himself if he is fulfilled. At work he should insist that every day be exciting, not because he is putting anything into his work, but because it is his
right.”

Before long the young humans were so busy discussing how bored they were that the crops were not planted and the people starved; the streets were filthy, so diseases broke out; the houses were dirty, so all families were in bad tempers; the offices couldn’t cope with the intricacies of government; and the schools turned out lazy, unprepared, sullen, unrealistic young people. And people didn’t go to church because they were afraid they might be bored there. Spiritual life died. Tragedy was upon the land. END OF PARABLE.

One last question: Why do you think they call it “work”?

Taken from a column that appeared in the Adventist Review, July 14, 1983.