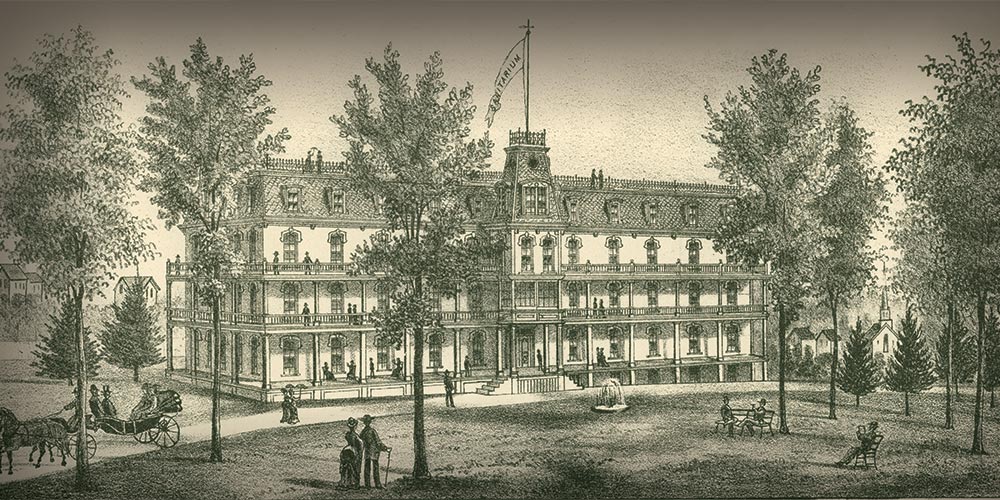 During the 1850s, new and up-and-coming Battle Creek, Michigan, became a location of growing importance for the Seventh-day Adventist movement.

Sabbathkeeping Adventist faith came to the city in 1852 when Joseph Bates was directed by the postmaster to “the most honest man in town,” a Millerite peddler named David Hewitt.* A local church was organized not long afterward. In November 1855 James and Ellen White and others connected with the Review and Herald publishing operation moved to Battle Creek.

A Great Place to Grow

From 1855 to 1903 church organization, world mission, and doctrinal understanding saw rapid development. In 1860 the church adopted the name Seventh-day Adventist primarily so that the publishing work could be incorporated.

In 1859 a new plan of giving, Systematic Benevolence, brought additional support for ministerial and evangelistic effort, requiring further organization to manage the collection and distribution of resources. This, together with a need for official denominational representation for Adventist conscientious objectors who were being drafted for the U.S. Civil War, led first to the formation of local conferences, then to the organization of the General Conference in May 1863.

In early June of the same year, Ellen White had her most comprehensive vision on health while in Otsego, Michigan. She was shown the link between health and spiritual experience. This led her and many others to adopt a vegetarian diet and give greater consideration to good health that included the therapeutic use of water, rest, and other natural remedies. An additional vision in 1865, in Rochester, New York, instructed Adventists to have their own institution of healing. This led to the establishment of the Western Health Reform Institute in 1866, later renamed Battle Creek Sanitarium.

The sanitarium became a world-renowned institution under the leadership of John Harvey Kellogg. Other sanitariums were established by Adventist doctors in other locations.

The third major ministry of the Seventh-day Adventist Church planted in Battle Creek was education. Goodloe Harper Bell began a private school in Battle Creek during the late 1860s. It slowly grew until 1872, when it was adopted as a General Conference project. This led to the incorporation of an Educational Society that established Battle Creek College in March 1874.

In 1874, John Nevins Andrews became the first official missionary sent from the United Sates to Europe. From both Battle Creek Sanitarium and Battle Creek College, medical and ministerial missionaries were trained and sent in growing numbers to various parts of the world.

An auspicious development during this time was the biblical understanding regarding church giving: tithing, returning 10 percent of one’s income, replaced Systematic Benevolence in 1879, greatly expanding the financial foundation of the church, and improving funding for its increasingly worldwide missionary work.

The General Conference structure, while having good representation at periodic sessions, did not have corresponding administrative representation. This led to a centralization of authority and decision-making in Battle Creek.

By the 1890s the sanitarium was a major operation, as were the Review and Herald Publishing Association and Battle Creek College. The largest church building in the denomination, the Dime Tabernacle, seated up to 4,000 people.

Ellen White counseled over the years that there should be a decentralization, and this finally took effect between 1901 and 1903.

Two major fires that destroyed first the Battle Creek Sanitarium on February 18, 1902, and the Review and Herald Publishing House on December 30, 1902, brought the realization that decentralization should not only be organizational, but also geographical. The General Conference organization moved from Battle Creek to Takoma Park in 1903. The publishing house relocated to Takoma Park on a more modest scale.

The educational center of the church also shifted away from Battle Creek. Emmanuel Missionary College (now Andrews University) was opened in Berrien Springs, Michigan, in 1901. The new school also transferred ministerial education away from Battle Creek. Andrews University continues as one of the flagship schools for the Seventh-day Adventist Church in North America.

Battle Creek Sanitarium was rebuilt in 1903 on a larger scale. It continued as an Adventist institution until 1908, when John Harvey Kellogg, after being estranged from the church, dropped most church representatives from the sanitarium association and made it a nondenominational institution. Between 1905 and 1909 a new health-care institution was developed in Loma Linda, California, that continues today as Loma Linda University Health.

Thus, during the first decade of the twentieth century, the church headquarters and three of the major ministries established or built up in Battle Creek—publishing, health, and education—all moved to new locations. The Dime Tabernacle was destroyed by fire in 1922. A more modest but still attractive “Tabernacle” was built in its place.

Adventists in the Community

Adventists continue to operate in Battle Creek. Besides local churches, there is also an academy, and for a number of years a hospital also operated near the site of the original sanitarium.

The establishment of the Adventist Historic Village (AHV) in 2000 brought a new Adventist ministry to Battle Creek. With several historic Adventist buildings restored and reconstructed, its purpose is to tell the story of God’s leading in the beginning of the Seventh-day Adventist Church in Battle Creek, and an understanding of the prophetic ministry of Ellen G. White.

Though God’s work through the Seventh-day Adventist Church is worldwide, with many centers of ministry, it is valuable to remember the role that Battle Creek played in establishing how the church does outreach. Important lessons can be learned both from the mistakes as well as the wonderful successes.

Merlin D. Burt, professor of Church History at the Seventh-day Adventist Theological Seminary, is also director of the Center for Adventist Research and the Ellen G. White Estate branch office at Andrews University.