God answered a prayer that was hardly a prayer. 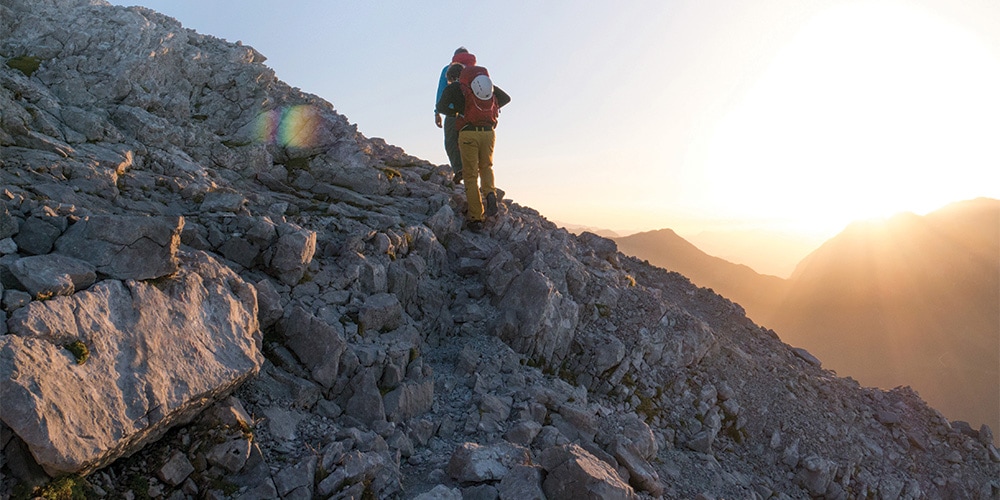 The day broke full of light and blue, but the temperature clung to the edge of freezing and stayed there all day. The climb went as expected: one day to hike the scree and talus up to Iceberg Lake; a night of waking sleep while sharing a down bag with my climbing partner; a granola start; then many rope lengths of superb climbing on handholds created for puny human passage.

We topped out kind of late (half shivering), and I knew that we had to move fast in order to get off Mount Whitney’s summit plateau and down the hikers’ trail before true dark captured us.

I unexpectedly caught sight of a lone figure plodding up the hiking trail toward the summit plateau. The sun hung low, the temperature stuck firmly in the high teens; and this guy approached the almost-15,000-foot summit wearing only a pair of running shorts, a cotton T-shirt, and the obligatory trucker’s hat.

As he got close, I saw a mortally foolish grin on a bluish face: he had made the summit and he felt great. But now we had to go down some nine miles of trail, and he had committed the common error of thinking of the summit as his only goal. Hypothermia had gripped him, evidenced by slurred voice, wooden movements, random thoughts.

Saying nothing, I stuffed him into our only down bag. But I already knew the sleeping bag trick would not work; he was too cold to generate any body heat of his own. So soon after putting him in the bag, I climbed in with him in the hope that I could warm him up. This failed as well. His body temperature began to make me cold too.

Too Little, Too Late

At this stage I knew the hiker would die. I think he, too, felt something had gone awry. But he still grinned anyway, heady with success; cold like the granite no longer warmed by the sun.

Of course, she dismissed this command as absurd.

I cannot remember that I actually prayed. It came out as more of a “God, please don’t let this man die” exhalation.

At the time I counted myself a devout Adventist Christian. But looking back some 30 years, I know that my faith fed itself more on intellectual and social fare than it did on the grace of the Word. In short, I lived the life of conventionally pious yet secular Christians; a man not yet convinced of his own filthy rags as a practical fact. I had baptized my normative sins. I did not feel at that time the imperative to die daily, to pray for the indwelling Holy Spirit each morning, or to live wholly by faith for the invisible kingdom.

This prayer (of sorts) floated in thin air for just a few seconds when I noticed another figure hiking up the trail: a woman in the semi-official garb of the backcountry ranger with a large radio strapped to her hip. As the ranger came up to me I simply blurted, “What are you doing here?”

She then told me that some hours earlier she had been at her camp on the west side of the Mount Whitney massif cooking supper when she heard an inner voice say, “Go to the summit.”

Of course, she dismissed this command as absurd: the day waned; the Whitney summit did not even belong within her patrol area; and nobody would be on the summit in the dark and cold.

She finally grabbed her jacket and her radio and started for the summit. The entire time she hiked up the John Muir Trail she struggled to understand why.

I explained the situation and told her that as a guide I was certain that we would not be able to keep the hiker alive until the next morning.

She nodded, turned on her radio, and within about 10 minutes a Navy helicopter swooped in from Lemoore Naval Air Station. As I loaded the hiker into the chopper, he thanked me and asked, “Are you really a guide?”

I clearly recall hiking some nine miles down to the car in stygian darkness, sometimes feeling the ground on hands and knees to avoid stepping off into the void. It counted as yet another miserable climbing descent. We did not get down until 2:00 a.m. But I felt joy for a life spared.

Of course, I did nothing to save the hiker. My training and experience as a guide did not make the least difference; my attempt to warm him came to nothing. I fully expected him to die. My hard-won mountaineering experience could only predict his tragic end. Yet God surprised me. The rescue had been divinely planned and executed before the emergency had even occurred.

Did my prayer matter? Yes, I believe it did; but it did not deserve to. That prayer came more from impulse than from faith; more from resignation than from hope. Yet God honored it.

How many times have I wondered at God’s glorious competence in the arena of my failure? We try so hard, we secular Christians. And when our strivings fail, and we think all is lost, we slur a wooden prayer for half-veiled complaint, expecting nothing to change. Then a miracle happens.

God managed two rescues that cold night on Mount Whitney: He saved a terminally cold hiker’s life, but he also rescued a dying prayer. And since then my rising prayer has been “Not to us, Lord, not to us but to your name be the glory, because of your love and faithfulness” (Ps. 115:1).