A Love Song for the Ages

It’s no accident that a song about romantic love appears in the Bible. 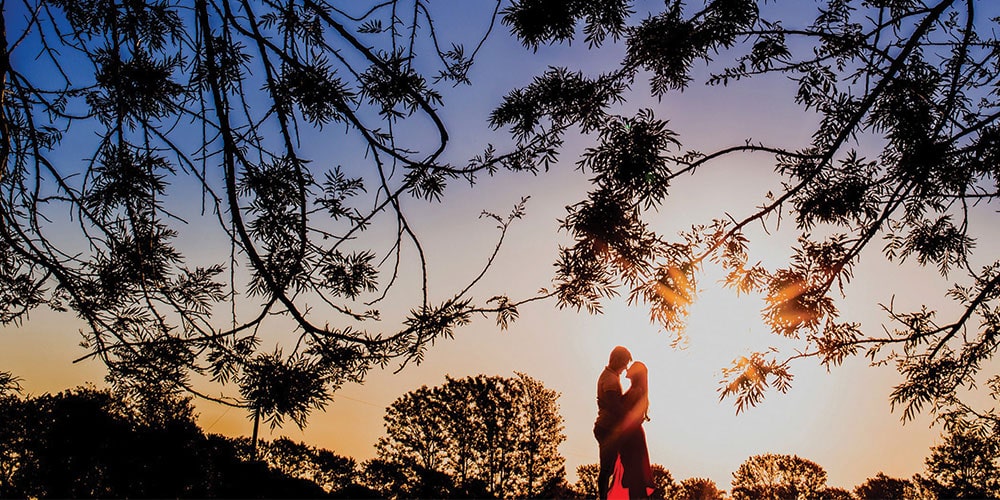 Song of Solomon, often referred to as the Song of Songs, is a poetic love song, celebrating marriage and sexuality. For us, as newlyweds, married for only a few months, the meaning of the Song has taken a new turn. And it has insight for singles, too.

In Jewish culture the Song is considered a most prized and important book. It is often read in its entirety, setting the stage for introducing to the family a positive view of human love and sexuality. The Song represents sexuality as an exquisite delight, a wonderful gift from God to look forward to in marriage.

The book portrays all types of intimacy, including emotional, mental, physical, and spiritual. It describes a wholistic approach to human sexuality that God intended from Creation, shown through many connections between the Garden of Eden and the Song of Songs.

Contrary to many opinions, the book is not allegorical or symbolic, but a real song written early in Solomon’s marital life. The letter reflects actual history as recorded in 1 Kings 3:1 to 9:1. King Solomon married Pharaoh’s daughter and lived a monogamous life for some 20 years. The word for “queen” (Song of Sol. 6:9) is used only for non-Israelite queens, so highlights that Solomon’s bride is his only one, in contrast to the many in the other nations.1

Who is this daughter? Textual evidence shows possible connections to Abishag, the Shunamite woman who cared for King David in his last days, and/or Pharaoh Siamun’s daughter, born on one of his expeditions to northern Palestine.2 Shulamit, her name in the Song, means “Mrs. Solomon,” but is also the Egyptian spelling for Shunamite. The mention of royal chariots (verse 12), along with the Song’s mirroring of Egyptian love poetry from the time of Solomon, indicate further corroborations to the historical claims of the book. The luxurious and floral settings, connections to Ecclesiastes, the mention of Solomon as “the king,” and its relationship with the proverbs of Solomon also reinforce this.

The book describes the progress from their courtship to engagement and finally to their wedding night, as well as the maturation of their marriage. The outline of the book can be summarized as follows:3

While many have been uncomfortable with the literal descriptions of the sexual relationship in Song of Songs, preferring to see an allegorical interpretation, the Song clearly focuses on celebrating and delighting in human sexual love in marriage. Song of Songs highlights several aspects of sexuality often neglected in the church today.

The anchor text is: “Set me as a seal upon your heart, as a seal upon your arm, for love is as strong as death, jealousy is fierce as the grave. Its flashes are flashes of fire, the very flame of the Lord” (Song of Sol. 8:6).4 God is the originator of love. He created the flame that grew between this young couple. He is the one who creates and re-creates the flame of love between spouses today. This creation and maintenance of God’s flame of love is something we pray for in our marriage.

Satan has many pitfalls to destroy our ability to love. We may have been the recipient of many experiences and fears that can threaten to dampen our love for another. But God’s flame of love is more than sufficient to counteract these deceptions. When we experience the flame of the Lord’s love, we not only deepen our love for each other, but also understand more fully the love God has for each of us.

In the center of the book, God urges the lovers, “Eat, O friends! Drink, yes, drink deeply, O beloved ones!” (Song of Sol. 5:1, NKJV). This divine blessing gives the crucial message of God’s centrality and rejoicing in marriage, intimate unification, and the sexual relationship. God officiated at the first wedding in Eden, and He continues to bless and delight in marriage.

Song of Solomon praises the relational process from beginning to end. The song follows aspects of a wasf (an Arabic term used for describing the other with extravagant praise), highlighting the praises of the charms of the lover, using literal as well as metaphorical terms.

God officiated at the first wedding in Eden, and He reminds us in Song of Songs that He continues to bless and delight in holy matrimony ever since.

The groom is praised twice (Song of Sol. 3:6-11; 5:9-6:3) and the bride is praised four times (Song of Sol. 4:1-7, 8-15; 6:4-10; 6:11–7:10). The song also provides a healthy way of looking at the growth and development of intimacy. Upon engagement, the couple recognize their commitment to each other (“My beloved is mine and I am his” [Song of Sol. 2:16]) and desire sexual union even more. As the wedding night approaches and passes, the height of sexual expression is given. Solomon praises his wife’s body, and she praises his.

Affirmation, intimacy, and relationship are themes that run all through the book. God intended for us to praise the wonders and beauty of our spouses. In the midst of their wedding night God blesses the couple, calling upon them to enjoy their intimate union (Song of Sol. 5:1). While sex is necessary for procreation, the focus is on the exquisite delight and joy of sexual intimacy within the confines of a biblical model of heterosexual marriage.

Sex is celebrated in the Song, and part of that celebration surrounds a sense of vulnerability. Vulnerability is important in all relationships, especially marital ones. The expression of needs, desires, and boundaries are all important for the healthy growth and development of both marriage and relationships. As Solomon and Shulamit grow in their relationship (Song of Sol. 1:2–2:7), they express intimacy and desire while keeping healthy boundaries for the expression of such intimacy.

Later in the book their desires are fully consummated, and boundaries no longer include sexual restraint. However, boundaries and expression of needs are still important, as the bride emphasizes that the groom’s desire is for her (Song of Sol. 7:11). She also shares her needs and desires as she initiates sexual intimacy and searches for him during times of stress. The benefits of mutually expressed desires and vulnerability include respect, building each other up, and submission to the other with joy.

Mutual vulnerability is one aspect of the Song of Songs’ portrayal of equality between the husband and wife. Hierarchy does not exist in the marriage relationship. Both are open and accessible, both are agents and initiators, both are employed and served. The Song includes a significant reversal of the curse of Genesis 3: the rare Hebrew word for desire is used for the man’s desire for his wife (Song of Sol. 7:11), complementing the wife’s desire for her husband in Genesis 3:16.5 The wife talks more than her husband, but she also initiates intimacy more often, reflecting interesting similarities to, as well as differences from, modern views of gender and marriage relationships.

Modern society’s aggressive degradation of pure sexual intimacy advances via secular media, hook-up culture, and acts of harassment and abuse. But there are multiple ways in which Solomon’s song can help restore the value and celebration of intimacy that Satan and society seek to destroy. Through the entire book the sexual unification that the couple look forward to, then experience in marriage, is reason for great joy. This biblical celebration of sex radically contrasts with the typical avoidance within the church of discussion surrounding it. Sex is sacred. Sex is powerful. Sex is unifying. Sex is a joyous gift of selflessness for the benefit and joy of the other, as well as a joyous gift from both lovers to be mutually shared.

While societies and even religions denigrate the value and meaning of sex, God encourages His people to live in a way that affirms its thrill and restores its beauty. As a celebration, sex and intimacy galvanize the family into a unit that can reflect the character of God to the world. Celebrating intimacy in every pure and beautiful way conceivable empowers us to draw others to God through their admiration of the gift of love we express between spouses and in the family. As Solomon summarizes toward the end of the book, love and intimacy reflect the very flame of Yahweh Himself (Song of Sol. 8:6). God, the originator of that flame, will keep it burning in our soul if we ask Him, and this is all the more reason to celebrate!

So, what if you’re single? Do you wonder, What does this book have to do with me? We see three reasons the message of this book is valuable.

First, purity is always God’s desire for you. If you are interested in marriage, preserving yourself for a God-ignited love with someone is of utmost importance. If you have been abused and assaulted, made mistakes, or thrown away God’s gift, His forgiveness and healing can restore what has been damaged through sin.

Second, if you are in a relationship, seek to express intimacy on all levels (emotional, mental, physical, and spiritual), for that is how healthy relationships grow. In your courtship, keep healthy boundaries so as to protect God’s gift of sex until your wedding.

Third, personal commitment to God always enhances anyone’s future. If that future includes marriage, your commitment is already enhancing your future marital union. Intimacy is enhanced when experienced within the true freedom of commitment. As you live your life in preservation of God’s gift, you can look forward to the joyful celebration of intimacy in the marriage circle. The purity of Christian couples can be a bless
ing to all single friends. Your preservation can be a means to share the love of God to friends who may have experienced great pain because of misappropriated intimacy. God is the ultimate lover of each person; He is your sufficiency as you delight ourselves in intimacy with Him.

As newlyweds, reading the Song of Songs has enriched our marriage as well as our walk with God. Sex originates with God, and His flame of love ignites love between husband and wife, impacting every aspect of life. Intimacy grows and shines with affirmation of each other, and total vulnerability. Rather than being limited to procreation, or even a taboo subject, sex is to be celebrated, expressed in all its power between husband and wife. From the joy of each other’s presence to the passion of engagement and wonders of exploring the other in marriage, the Song of Songs paints the glorious picture of what God designed sex and intimacy to be.

To be “one flesh” also typologically points to the union God has within Himself, and the love He longs to have with His children. The closer and more precious the sexual intimacy between husband and wife, the deeper insights each will have into their Savior’s love, as the human flame of love gives glimpses of the heavenly Flame of love!

Bill and Rahel Wells were married in 2017. Bill is a recent seminary graduate. Rahel is an assistant professor of biblical studies at Andrews University.

Journeys with Jesus
Time to Love
Who has time to rest? To do anything besides work?
Magazine Article
Thank You! The Grateful Stance
Toward a theology of thankfulness.

Cure for the Common Life
The Hollywood Influence
Through the prophet Isaiah the Lord reveals a lifestyle that we could never imagine, one that far surpasses those lifestyles depicted on television or in magazines.