A Community in Crisis 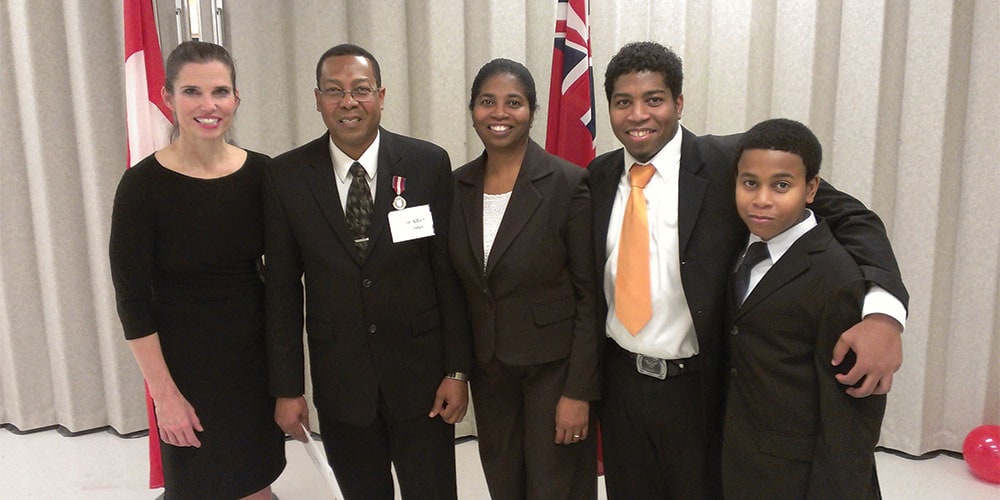 Allan Chichester accepted the call to serve as senior pastor of Toronto West Seventh-day Adventist Church soon after the November 2005 killing of 18-year-old Amon Beckles on the church steps. Beckles was attending the funeral service of his 17-year-old friend Jamal Hemmings, the grandson of a church member and himself a gunshot victim.* Chichester, with the help and support of his Toronto West congregation, established a strategic marketing plan based on Jesus’ biblical model to meet the needs of the traumatized community. Seven years later Chichester was awarded the Queen Elizabeth II Diamond Jubilee Medal in recognition of his work in the Etobicoke North community. His community service programs were based on his Doctor of Ministry professional project, “A Strategic Marketing Plan for Community Ministries at Toronto West Seventh-day Adventist Church.” Member of Parliament Kirsty Duncan presented the medal during a special investiture service.

What did you do before coming to the Toronto West church?

Initially I served as an officer for the military in Guyana. I eventually resigned—with full military honors—after refusing to work on Sabbaths. It became clear during that time that the Lord was calling me into ministry.

I received my degree in theology from the University of the Southern Caribbean, and worked for six years for the Guyana Conference of Seventh-day Adventists, first as a pastor, then later as the associate youth director, as well as conference radio narrator and district pastor. In 1996 my wife, Lauren, our son Royon, and I moved to Trinidad, where I served as senior pastor of Caribbean Union College and Lauren as assistant professor and chair of the Home Economics Department. Our second son, Relon, was born in Trinidad in 1999. In 2001 I received a call to the Ontario Conference in Canada to serve as senior pastor of the Kingsview Village church. In January 2006 I was transferred to the Toronto West church in the community of Etobicoke North.

You came to Toronto West on the heels of the shooting in 2005?

Yes. When I arrived, the church was experiencing major trauma. There was no textbook on how to recover a church from trauma like that, so it was a matter of praying for the guidance of the Holy Spirit to pull the church together.

As I focused on the church to help it recover, a man from the community came to me and said, “Pastor, we’re glad you’re here; but we feel left out as a community, because the community is also in trauma.” That opened my eyes to the necessity of ministering to the community at large.

What role did your Doctor of Ministry professional project play as you prepared to minister to the community?

My professional project developed as part of the response to the needs of the community. The church had already been engaged in numerous awareness programs. Some worked well; others did not. I realized that we needed a strategic plan. While we were engaged in strategic planning, I started my doctoral studies at Andrews University.

How did you determine what outreach ministries were needed?

I began by ascertaining the top 10 real and felt needs of the Etobicoke North community. I realized that we had been attempting to minister to the community without stopping to fully determine what those needs were.

We designed a community day called the Day of Love and Care. We wanted people to experience the love of Christ. During that process we learned that many people from the Middle East and the Far East were making the community home. Hence, there were cultural differences to be addressed, which explained some of the ministry challenges the church had been experiencing.

What kind of challenges?

One of the challenges was cultural intelligence. We had begun a midweek meal just ahead of our prayer meetings. We hoped people would come in for the meal and stay for the meetings. People came, but the numbers kept declining. We later discovered that our menu was not ethnically sensitive. We are mostly a West Indian congregation, so we prepared West Indian-style meals. This did not always meet the taste preferences of the ethnically diverse community. So we created a menu that was ethnically sensitive for the Day of Love and Care program, and it worked very well.

What community needs did you recognize?

Employment, housing, learning English as a second language, food, health, and family support, among others. Based on our church resources, we addressed the needs for clothing, food, and fellowship as we planned for the Day of Love and Care.

Many of the people in Etobicoke North were new immigrants to Canada, with a great need to learn English and to find employment. In time we established an English language program.

What else did you do for the Day of Love and Care?

We wanted to do something especially for children, so we added a children’s ministries department as part of our community services. We also decided to provide both new and used clothing.

We found that the implementation of the strategic process led to a 300-percent increase in attendance at the second annual Day of Love and Care.

Your church must now be very familiar to your community.

Yes, because many of their needs were addressed. Today the church has a permanent food bank that caters to community needs.

Before I transferred to the Toronto Central church in 2014, there was another shooting in which a 15-year-old young man was killed. His funeral was held at the church. So Toronto West became even more well known as a church that wants to reach out and help.

That must have been a very difficult time for you, the church, and the community.

It was. One of the saddest days I spent there was doing the funeral of Andrew Naidoo, who had been killed close to his home, just across the fence from the church. It was heartbreaking to see his grieving mother.

Sounds like the church members have been supportive of these programs.

Yes, the success of the programs depended largely on the help and willingness of members. The church is very involved and supportive.

Before I arrived at Toronto West the members had already been making significant efforts to minister to the community. My presence and program introduced additional ministries that made the church even more relevant.

It is diverse in the sense of countries of origin, but it is largely a West Indian church, along with some members from Africa, Canada, and the United States.

Approximately 1,300. It’s one of the largest Adventist churches in Canada.

What is the motivation behind what you’re doing?

My goal is to meet people’s needs and lead them to Jesus Christ.

In a way, I’ve been ministering to people all my life. I grew up in a single-parent home in Guyana. I was born in the middle of a major ethnic conflict, when Guyana was seeking independence. Acquiring food was difficult. During that challenging time my grandmother got food from the welfare department of the Seventh-day Adventist Church. It’s amazing how God works! I became sensitive to the needs and challenges faced by young people who grow up in such circumstances.

When I was young, my home church organized a soup kitchen, where they supplied meals at a discount price for people in need. In three churches that I pastored in Guyana I established feeding programs for children. So I’ve been doing this all my life.

What do you envision for the future?

I am utilizing the same strategic marketing plan at Toronto Central that I used at Toronto West. We are now ministering to the community by providing food, clothing, and school materials for children at the Day of Love and Care program. I’ve also been asked by my doctoral professors to turn my professional project into a manual for the world church to help our churches to become more contextually relevant in their communities. My aim is to utilize what God has blessed me with to bless other churches.

How did you feel when you were presented with the Queen Elizabeth II Diamond Jubilee Medal?

I was elated; I was amazed. It came as a surprise. I’m very thankful to God for bestowing upon me this significant honor through the government of our country and am grateful for the work that God has allowed me to do here in Canada.

What is the key to community service and outreach?

It would be to follow the model of our Lord and Savior Jesus Christ, to mingle with people the way Jesus did, desiring the best for them, discover their needs, minister to those needs, and then encourage them to follow Jesus.