Looking Back to Look Forward

Does the saying “The more things change, the more they stay the same” still apply? 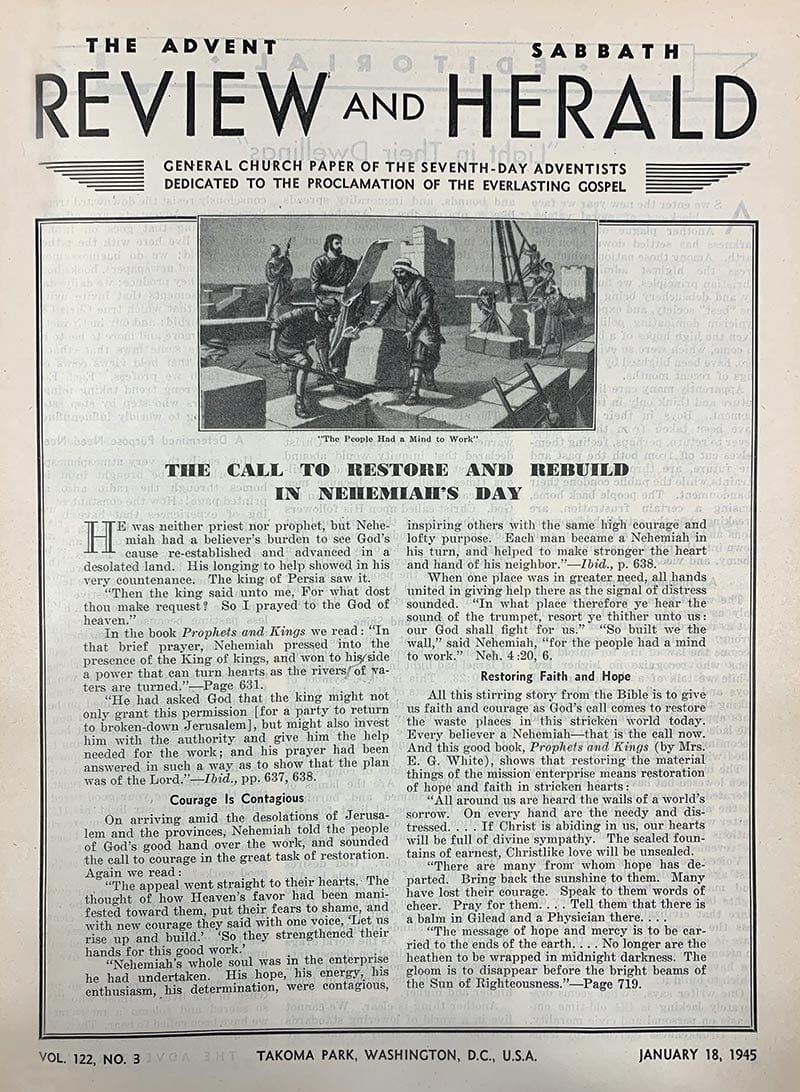 The other day my friend and I were talking about state-of-the-world issues. We ran through the pandemic, more virus mutations, climate change, violence, politics, etc. He shook his head and said something along the lines of how one has to think the end is surely very soon. I agreed with him. But then I brought up the point that many Adventists in generations before us have likely thought the same thing. Take, for example, the World War II years and all we have learned about it since. How would anyone witness the dropping of atomic bombs on Hiroshima and Nagasaki, for example, and not think that with that kind of firepower available, the world surely wouldn’t last to 1960? Yet here we are. On that thought, I went to the stacks of the Adventist Review archives to discover what our publication was printing in January 1945. The war had yet to be called in favor of the Allies, but the tide was surely turning. The atomic bombs wouldn’t materialize until the summer, and the horrors of Europe’s death camps were just being uncovered. But in this excerpted editorial from January 18, 1945, associate editor Frederick Lee addressed issues brought on by the wartime trauma of the day that interestingly enough, isn’t that far off from problems faced in 2021. What do you think? Does this editorial speak to us today?

Wilona Karimabadi is an assistant editor for Adventist Review Ministries.

Light in Their Dwellings

As we enter the new year we face a black-out of moral values. Another plague of Egyptian darkness has settled down upon the earth. Among those nations which express the highest admiration for Christian principles, we find immorality and debauchery being flaunted in the “best” society, and expediency and cynicism dominating political policy. Even the high hopes of a better world to come, which were so evident a year ago, have been blighted by the happenings of recent months.

Apparently many care little for the future and think only in terms of the moment. Boys in their teens who have been taken from their homes, never to return, perhaps feeling themselves cut off from both the past and the future, are throwing off all restraints while the public condones their abandonment. The people back home, sensing a certain frustration, are breaking over the established conventions and are taking a toboggan slide down into the pit of drunkenness, blasphemy, and vice.

The world is in a state of flux not only as regards national boundaries but as regards the matter of right and wrong. The desire of the moment has become the law of life for untold millions who recognize no higher law. While we talk of a religious revival, boys and girls all over the land are taking their first drink and their parents apparently are unconcerned, and the lads who have gone off to war are becoming steeped in a vile atmosphere filled with curses and smut.

The moral standards not only have been lowered but have been all but obliterated by many of those who lead in the affairs of men today. How a better world can be built on such foundations is a mystery that will never be revealed.

Voices are beginning to rise in protest against this black-out of morals and many are demanding that the lights be turned on again. They declare that civilization is doomed unless the present tide of license and hate is curbed. It is folly, they say, to attempt to create a new world when we have no moral foundations upon which to build it.

One writer says, “What seems desperately lacking is the old-time emphasis on personal and civic morality. . . . Drunkenness increases by leaps and bounds, and immorality spreads like a prairie fire.” Another says, “From all across the land come evidence in abundance showing that in public decency, taste, manners, and morals the American people are in a slump. . . . One cannot mingle long with the modern crowd without having the feeling that ours is a shoddy generation.”

Regarding plans for a world peace organization, Carl A. Berendsen, minister of New Zealand to the United States, said recently in a broadcast, “It is a moral problem the world has to solve.”

The prophets, looking down to our day, saw this great moral decline and warned God’s people against it. Christ declared that iniquity would abound in the last days, and Paul said, “Perilous times shall come,” because men would care more for pleasure than for God. Christ called upon His followers to be the light of the world and not hide their light under a bushel. The prophet Isaiah spoke of a time when “darkness shall cover the earth and gross darkness to the people,” and challenged the church to rise up and let the light shine forth in all its glory.

We are told that during the plague of darkness in Egypt, “all of the children of Israel had light in their dwellings” (Ex. 10:23). This is but a symbol of what God expects of His people today. What does the world see in the dwellings of Seventh-day Adventists? Are they places whence the beacon lights of righteousness and truth are shining forth? Or have these lights been dimmed by the shades of compromise and worldliness? Are the lamps of truth kept trimmed and burning? There is light, special light for this generation in our dwellings, but is it shining forth in our neighborhoods as it should?

One thing is clear. God desires that the homes of His people be different from the homes of those who make no profession of the advent hope. It is His purpose that these family units be little islands of light in a sea of moral darkness. As the world drags the banner of civilization deeper into the morass of immorality, God’s people are to hold the banner of truth higher and higher.

Another thing is clear. We cannot live in a world of lowering standards and not be affected by it unless we consciously resist the downward trend. Seventh-day Adventists are affected by everything that goes on in the world. We live here with the people of the world; we do business with them; we read newspapers, books, and magazines they produce; we daily face the advertisements that invite us to do this and that which true Christian principles forbid; and our institutions are coming more and more to be regulated by the same laws that control institutions that hold views contrary to the faith we profess. Each day sees some wrong trend taking toll of our members who step by step have been yielding to worldly influences.

. . . We read: “There must be no pretense in the lives of those who have so sacred and solemn a message as we have been called to bear. The world is watching Seventh-day Adventists,because it knows something of their profession of faith and of their high standards, and when it sees those who do not live up to their profession, it points at them with scorn.”—Testimonies, vol. 9, p. 23. . . .

Surely the growing darkness in the world about us should be a challenge to each one of us in this new year to make his life what it ought to be so that his dwelling place may shine with the light of truth and righteousness.