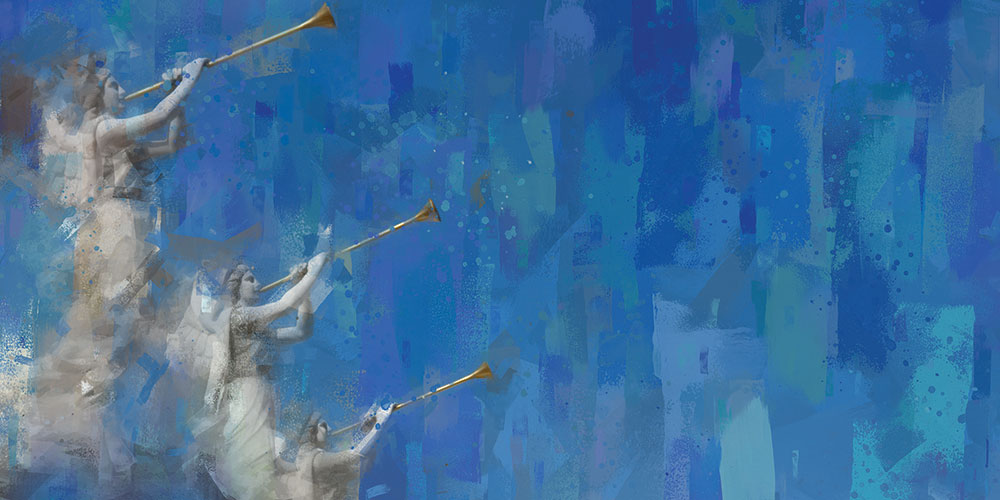 The heart of the book of Revelation and the rhetorical climax of the Book of all books is Revelation 12-14.

The book of Revelation does have a heart. Undying gospel is at its core (Rev. 14:6). And the gospel story is a love story—that’s basic. You can’t dismiss it as simplistic, shallow, and impractical, because you want something more sophisticated. Divine love is basic. And basic to any love story is at least one lover.

In the divine love story, the “at least one Lover” is God: He loved us when we were His enemies, while we were sinners (which is the same thing)—sinning by nature and by choice. Christ died for us because God was determined to turn His enemies into His friends; and the only way He could win us back, the only way He could reunite us with Himself, was “through the death of his Son” (see Rom. 5:10; also verse 8).

But someone He loved completely, one whom He had honored highly, decided to become His enemy, now operating behind multiple IDs: Lucifer—because he once lived in the light; devil—for his scandalizing; Satan—for his hostility; roaring lion—for his terrorizing; ancient serpent—for his historic deceptiveness; great dragon—for his cruelty, etc. (Isa. 14:12; Matt. 13:39; 1 Peter 5:8; Rev. 12:9; etc.).

It is nearly unbelievable what this enemy first started fighting over, or where. It was over worship, and he started it in the central sanctuary of the universe, convincing many of God’s serving spirits (angels—see Heb. 1:14) that their Master didn’t deserve all the adoration and praise He received.1

This is all heartbreaking to God because God is love by nature, by law, today and forever. “Every manifestation of creative power is an expression of infinite love.”2 That first rebel’s brilliant endowments all witnessed to his Creator’s love. And yet, today, when God’s Word testifies that everything is from, through, and for Him (Rom. 11:36), God may seem intensely selfish—everything is for Him!—because of what God’s enemy has done to our thinking. His distortions of our thinking diminish our capacity to grasp the most basic truth about the three angels’ messages and the controversy the enemy started: that God is love.

To straighten our twisted thinking, God shares with us an otherworldly vision, a glimpse of the norm; a glimpse that reveals heavenly beings bursting out at the max of their lungs (if that’s how they shout) because of the overwhelming ecstasy of basic truth, because they see reality, sheer and simple—just the facts: “You are worthy, our Lord and God, to receive glory and honor and power, for you created all things, and by your will they were created and have their being” (Rev. 4:11).

The shouters here are neither brainwashed stooges nor shallow sycophants: they are the unfallen and the redeemed, drawn out together to the utmost extent of their being, in the transporting act of true worship, which is the first angel’s call. Worship is where the great controversy started. Worship is where it must be settled. The heart of Revelation is chapters 12 through 14; and the heart of the three angels’ messages is worship: “Worship your Creator—by the rules,” the first angel commands (see Rev. 14:7). Get worship wrong, and experience the tragic consequences, the last angel warns (verses 9-11). Love is basic to all God does in and for creation.

Following His rules is the basic, true worship response of all Creation: we experience full existence by giving all back to Him through all we do, whether eating or drinking or serving or whatsoever (1 Cor. 10:31).3 It is the witness of human lips and lives committed to obeying the Creator’s rules that have borne His messages across the earth from their first proclamation until today. Human beings are the angel messengers of God’s good news. That’s basic too.

Yes, Babylon is a clear fundamental of the messages—Babylon, in the middle of everything, a word and name that stand for all of confusion’s history from beginning to end.

When some of Lucifer’s followers realized they were caught in a lie and wanted to go back to their loving Father, “Lucifer had another deception ready. . . . [He] now declared that the angels who had united with him had gone too far to return.”4 It was a straightforward lie, for God loves with everlasting love (Jer. 31:3), forever yearning to have His lost children back. The lie illustrates what the second message announces: Babylon, confusion,5 is now exposed.

Babylon is the confusion of duress, of frustrated angels convinced that they should leave, and convinced that they cannot: disgruntled workers from then on. In Genesis, Babylon is Nimrod’s ambitions,6 a tower to reach heaven and preserve earth’s civilization (Gen. 11:4), distrusting God’s promise never to flood the whole earth again (Gen. 8:21, 22). In Isaiah 14, Babylon’s ruler schemes to usurp the throne of God Most High (verse 14). And in Judah’s history, Babylon’s greatest human ruler devastates God’s people, terminates Davidic royal rule, destroys the place built for worship of the true God, and transfers the treasures of its sanctuary to the house of a heathen god (Dan. 1:1, 2; 2 Kings 25:1-22).

In sum, Babylon comes to stand for the triumph of greed over grace, lust over love, power over peace, devotion distorted and worship misguided (Jer. 51:7; Dan. 3:1-6; Rev. 17:1-5). And the second angel informs that Babylon is now fallen (Jer. 51:8, 9; Rev. 14:8); that the failures of its best systems—political, economic, religious, cultural—now lie exposed at multiple levels: domestic, local, national, international.

From the beginning of humanity’s rebellion, God announced that He would get us back. The effort cost Him everything, requiring from Him an “unspeakable Gift,” an “inexpressible,” “indescribable” Gift, a Gift “too wonderful for words.”7 When God gave us His Son, “He poured out all heaven in that one Gift.”8 God gave up “his one and only Son” (John 3:16) to meet the law’s natural consequence and basic demand: death to the lawbreaker (Rom. 6:16, 23). God’s Son sacrificed Himself, substituting His innocence for our guilt. He is the “Lamb of God, who takes away the sin of the world” (John 1:29). But death could not retain Him when He died, because it had no claim on Him: He was guiltless. Now He reigns, and our life is guaranteed in Him.

This truth inspires one of the most glorious scenes of the book of Revelation, as millions of angels surround God’s throne, belting out the music at the top of their lungs—if that’s how they shout: “Worthy is the Lamb, who was slain, to receive power and wealth and wisdom and strength and honor and glory and praise!” The glory is infectious; all creation joins the shouting: “To him who sits on the throne and to the Lamb be praise and honor and glory and power, for ever and ever!” The exultation is climactic: “The four living creatures said, ‘Amen,’ and the elders fell down and worshiped” (Rev. 5:12-14).

Good sense and emotion would subscribe to this worship forever! And yet, some people choose not to. The time comes when God must honor their choice (Rev. 14:7). And the third message advises of the painful consequences of choosing the chaotically senseless adoration of created things, instead of joining the chorus of redemption in endless paeans of praise to the Creator Lamb. Worship is where the great controversy began, and worship is how it will be resolved. Forget the bea
st—cultic or economic; forget human contrivance and creaturely system, device, or creed: worship the Lamb.

Visualize yourself among the messengers of Revelation 14, God’s unstoppable army, serving on all expeditionary fronts. Unavoidable and irresistible. Delivering, as they say of the famed U.S. Postal Service, through “neither snow nor rain nor heat nor gloom of night”; bringing a word to all that is just right for all right now. Our basic message: God is love that never will change; live all your moments to glorify His name. That is true worship. That is how you live life in all its fullness (John 10:10). Nothing else is true living. Nothing else makes sense.