As long as evil is in the world, we have to stand against it. 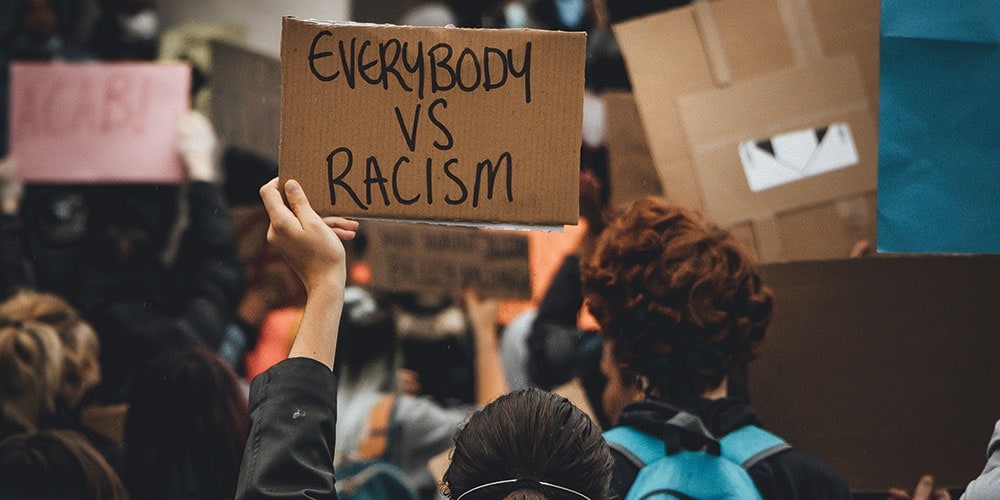 Yes, the wounds are still fresh. And because of this, some suggest we not get preachy or share Bible encouragement right now. It’s true, of course: people of all colors, creeds, and cultures need to empathize more with one another.

But let’s never forget that the Bible was designed to give us badly needed encouragement straight from our Creator’s heart in times like these. “Everything that was written in the past was written to teach us, so that through the endurance taught in the Scriptures and the encouragement they provide we might have hope” (Rom. 15:4).

The devil is like darkness; he melts in the light. So let’s turn the light of God’s Word on him. We need more of God’s Word, not less, as we contemplate what we all saw on May 25, 2020, in Minneapolis. Police officer Derek Chauvin pressed his knee mercilessly on the neck of George Floyd as Floyd gasped, “I can’t breathe; I can’t breathe,” and cried out for his mother! Call it what you want—I call it evil. On May 25 evil looked into our eyes and did not blink.

A Word for Our Time

One thing I appreciate about the Bible is its relevance. In my 25 years of pastoral ministry I’ve often been irrelevant, but never the Bible! It speaks to every situation, and our current crisis is no exception.

God has at least three things to say to all colors, cultures, and creeds.

First, God’s Word tells us that we are living at the very end of time. Jesus predicted that before He returned there would be problems with heartlessness. As He put it: “The love of most will grow cold” (Matt. 24:12). Jesus predicted the kind of heartlessness we saw unleashed as George Floyd struggled for almost nine minutes, minutes hard to watch and believe.

Our young people and members should rise up and condemn evil when they see it, and work to make positive change.

Interestingly, though, Jesus goes on to say in the following verse: “But the one who stands firm to the end will be saved” (verse 13). Jesus is clearly pleading with His people not to allow the coldness around them to extinguish their warmth, but to endure in love. In other words, the colder this world gets, the warmer our hearts need to be toward one another regardless of creed, color, or culture. What a challenge!

Isn’t this enduring love the essence of what it means to be disciples? “By this everyone will know that you are my disciples, if you love one another” (John 13:35). We must not allow evil to jade us or persuade us; we must choose to love, even in a world gone cold.

Second, God’s Word tells us that it’s OK to be angry. Anger is an emotion that God has placed in all humanity. He Himself displayed it at times. Of course, God’s anger, unlike human anger, always brings out the best in a situation (James 1:20).

Still, anger is a legitimate emotion. In fact, the apostle Paul essentially wrote: “Be angry!” Are you feeling angry right now? Then “be angry.” But he goes on to say, “Do not let the sun go down while you are still angry, and do not give the devil a foothold” (Eph. 4:26, 27). In other words, “be angry,” but don’t let this emotion, or any other emotion, become perverted and create a wedge for the devil to take control. Instead, channel it toward positive change and action.

I am proud of the many Adventist young people who are praying, protesting, and working to change policy in their local communities. This is what it means to “be angry, but do not sin.”

The Seventh-day Adventist Church must be careful to march under just one banner, the banner of Christ. All that we do to diminish racism, injustice, and violence must be done in His name, by His methods, and for His glory.

Finally, God’s Word tells us that racism, injustice, and violence, and all those who participate in these evils, will ultimately face the righteous and impartial Judge of all the earth. Every act thrown “under the carpet” will be dragged out and will face the scrutiny of God. Nobody is getting away with anything.

Now is the time to repent, reform, and come under the cleansing and purifying blood of Jesus. Soon the long-awaited and often-ignored final judgment of God will arrive. Here’s what the first angel’s message of Revelation 14 says we should do in preparation: “Fear God and give him glory, because the hour of his judgment has come. Worship him who made the heavens, the earth, the sea and the springs of water” (Rev. 14:7).

This doesn’t mean that we shouldn’t pursue justice now. Of course we should! This also doesn’t mean that we shouldn’t speak out when we see evil. We should! In fact, the apostle Paul says we are to “expose them” (Eph. 5:11). Our young people and members should rise up and condemn evil when they see it, and work to make positive change. But we cannot forget that we are behind enemy lines. Evil will haunt and stalk us until Jesus, the Prince of Peace and righteous judge, returns. But we Adventists have good news!

“Joy to the World” is one of my favorite Christmas songs. When I sing it, I often think of the Nativity and of Baby Jesus lying in a manger adored by Wise Men, shepherds, angels, Mary, and Joseph. But did you know that the song was written for the second coming of Jesus, not the first?

That’s right! Isaac Watts wrote it to turn people’s attention to the Second Coming! In fact, Watts got his inspiration from Psalm 98. In this wonderful and timely psalm, the writer appeals for all creation to sing with joy to the Lord. Why? The psalm ends with these words: “Let them sing before the Lord, for he comes to judge the earth. He will judge the world in righteousness and the peoples with equity” (Ps. 98:9).

I long for that day, don’t you? The dead will arise at the Second Coming and cry out, “I can breathe! I can breathe!”

Even so, come, Lord Jesus!

Gary Blanchard is director of Youth Ministries for the General Conference.