The First Battle of Manassas in America’s Civil War revealed much more than military strategy. 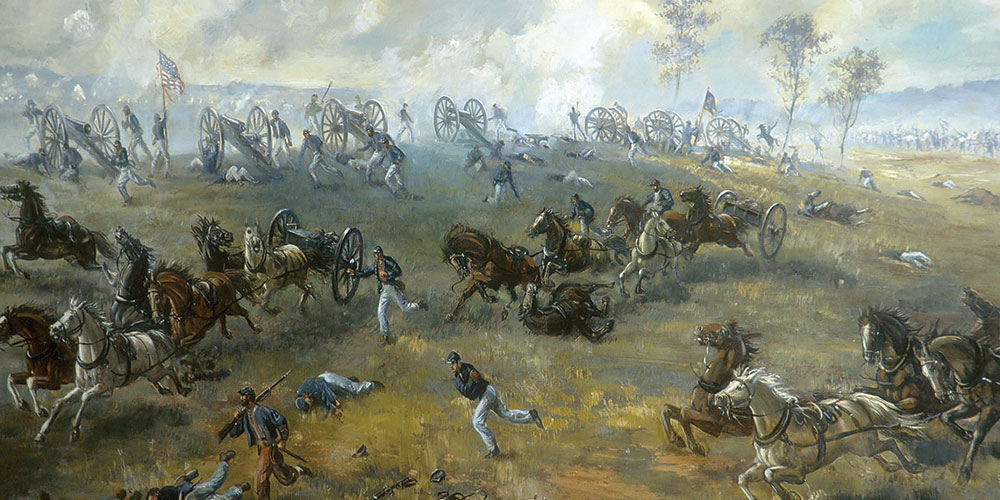 Coronavirus, global pandemic, mandatory shelter in place, social injustice, protests, pros and cons of facemasks, the new norm, future waves of virus outbreak, and on it goes. We are truly living in an extraordinary period of history. If there was ever a time for believers to look heavenward for divine intervention, it is now.

And a single battle during the Civil War in the United States reminds us that God’s hand is more involved in our world than we may sometimes realize.

During the afternoon of July 21, 1861, the First Battle of Manassas took a sudden and dramatic turn. Throughout most of the day Northern troops had experienced relative success in attacking Southern troops entrenched by the stream called Bull Run near Manassas, Virginia.

By 3:30, however, things started to go rapidly downhill for the North. The commanding general, Irvin McDowell, put his last hopes in the two brigades of Colonel William T. Sherman and Colonel Oliver O. Howard. As Sherman sent his brigade up the hill, regiment by regiment, they suddenly broke in disorder and began to retreat. Soon Henry House Hill was full of Union troops retreating from the field, some in orderly fashion and others in a wild panic. Howard sent his troops up Chinn Ridge, only to be repelled by fierce Confederate fire and flee back down the ridge. By 4:30 the entire Union army was in retreat, and the battle was over.

The North reeled in shock and despair. The public outcry was: “How could this have happened?” “What caused our troops to become suddenly panic-stricken and leave the field?” Reports from the battlefield were varied and inconsistent. But all agreed that whatever initiated the retreat, the end result was a disaster. Historians have studied official reports of the battle and concluded that the retreat was most likely caused by Union troops feeling overwhelmed by Confederate countercharges.

There was so much mass confusion toward the end of the battle that no one can be absolutely sure what exactly happened. Five days afterward, the New-York Daily Tribune proposed an interpretation that many of that day accepted: “The secret of that panic will perhaps never be known. All essay to explain it, and all fail.”1

On August 27, 1861, a little more than a month after the battle, Ellen White explained in the Advent Review and Sabbath Herald that although “the sudden falling back of the Northern troops is a mystery to all,” they didn’t realize “that God’s hand was in the matter.”

Her interpretation of the retreat was unique. Based on a vision given her in Roosevelt, New York, on August 3, she identified the origin of the panic. “Northern men were rushing on,” she said, but “just then an angel descended and waved his hand backward. Instantly there was confusion in their ranks. It appeared to the Northern men that their troops were retreating, when it was not so in reality, and a precipitate retreat commenced. This seemed wonderful to me.”2

The old spiritual, “He’s Got the Whole World in His Hands,” is worth singing again as if for the first time.

Interestingly, at the moment of demoralization among the Union troops, Confederate Colonel William W. Blackford was atop Chinn Ridge with a cycloramic view of the battlefield. He later recorded this vivid memory in his published war journal:

“But now the most extraordinary spectacle I have ever witnessed took place. I had been gazing at the numerous well-formed lines as they moved forward to the attack, some fifteen or twenty thousand strong in full view [the actual number of Union troops on the field was much less, around 12,000], and for some reason [I] had turned my head in another direction for a moment, when someone exclaimed, pointing to the battlefield, ‘Look! Look!’ I looked, and what a change had taken place in an instant. Where those ‘well dressed,’ well-defined lines, with clear spaces between, had been steadily pressing forward, the whole field was a confused swarm of men, like bees, running away as fast as their legs could carry them, with all order and organization abandoned. In a moment more the whole valley was filled with them as far as the eye could reach.”3

The panic that caused the retreat was apparently identified by Ellen White but graphically detailed by Blackford. She saw the backward wave of the angelic hand; he observed its effect on the Union troops. She witnessed the confusion in the ranks; he saw “a confused swarm of men, like bees.” She observed a “precipitate retreat”; he was surprised at the complete loss of military organization as the army ran off the field.4

This fascinating vignette of angelic involvement in the first major battle of the American Civil War is a feature that Adventists have appreciated over the years. But the real heart of the testimony lies in the explanation given to Ellen White about the angelic intervention. Immediately following the description of the angel, she wrote: “Then it was explained that God had this nation in His own hand, and would not suffer victories to be gained faster than he ordained, and would permit no more losses to the Northern men than in His wisdom He saw fit, to punish [the North] for their sins [of compromising with Southern slavery].”5

In her explanation we find Ellen White’s most significant theological statement about the American Civil War. The angelic intervention was the context in which she understood how God would involve Himself in the entire war.

The angel on the battlefield was thus an illustration of how God “had this nation in His own hand” and would guide the ultimate outcome—a Northern victory. This victory would come slowly and painfully, however, for God “would not suffer [allow] victories to be gained faster than He ordained.” As one studies the Union patterns of wins and losses throughout the war, it’s obvious that as the emancipation of the slaves gained momentum, so did Northern victories.

This theological assertion has a wider application than to just the Civil War period of American history. During the Revolutionary War period, for example, one could say that God blessed the patriots with military success and in His providence established the United States. Decades later, when divine patience had reached its limit with American slavery, divine punishment came in the form of the Civil War. The nuanced idea is that God will bless or punish this nation as His providence deems best, because He has its destiny in His hand.7

To be sure, Ellen White’s theological assertion finds its true meaning in the biblical teaching that God holds all the nations of the world in His hand (Dan. 2:21; Ps. 24:1; 75:7).

When God intervened in David’s battles with the Philistines and gave him victory, the new king exclaimed, “The Lord has burst through my enemies before me like a bursting flood” (2 Sam. 5:20, ESV).8 He called the place of the victory “Baal-perazim,” which means “Lord of breaking through” (1 Chron. 14:11, note, ESV). David recognized that God’s hand overwhelmed his enemies like a flood breaking through a dam, and He would establish His kingdom in its present geopolitical situation.

As God broke through David’s battles to establish his kingdom, broke through the battles of the Civil War to deliver the slaves, broke through the battles of World War II to rid the world of the Nazi regime, so He will break through and address the pandemic, social injustice, a
nd intense geopolitical crises we find ourselves in today. He has the destiny of this nation, the destiny of the whole world, in His capable hands. The old spiritual “He’s Got the Whole World in His Hands” is worth singing again as if for the first time.9

Even more encouraging is the fact that God has each individual human life in His hand. The psalmist offers this testimony: “I sought the Lord, and he answered me and delivered me from all my fears. Those who look to him are radiant, and their faces shall never be ashamed. This poor man cried, and the Lord heard him and saved him out of all his troubles. The angel of the Lord encamps around those who fear him, and delivers them” (Ps. 34:4-7, ESV). These encouraging words assure us that when we cry out to the Lord, He will help us in our troubles, and even, if necessary, send an angel to intervene.

Ultimately, the greatest way God has intervened in this world and our individual lives is through His Son as expressed in the words: “For God so loved the world, that he gave his only Son, that whoever believes in him should not perish but have eternal life” (John 3:16, ESV). This is the supreme act of divine intervention! God sent His only Son into this world to die on the cross and offer the gift of eternal life to “whoever” accepts it. When you and I embrace this gift, our lives are truly in His hand—now and for eternity!

Long ago, Ellen White pulled back the curtain between the visible and invisible at the outset of one of the most crucial moments in American history and showed how God had this nation in His hand. Her writings still speak today and point human hearts to the promises of Scripture, where God assures us that He has the whole world, as well as our individual lives, in His hands.

Jud Lake, Th.D., D.Min., is a professor of religion at Southern Adventist University.