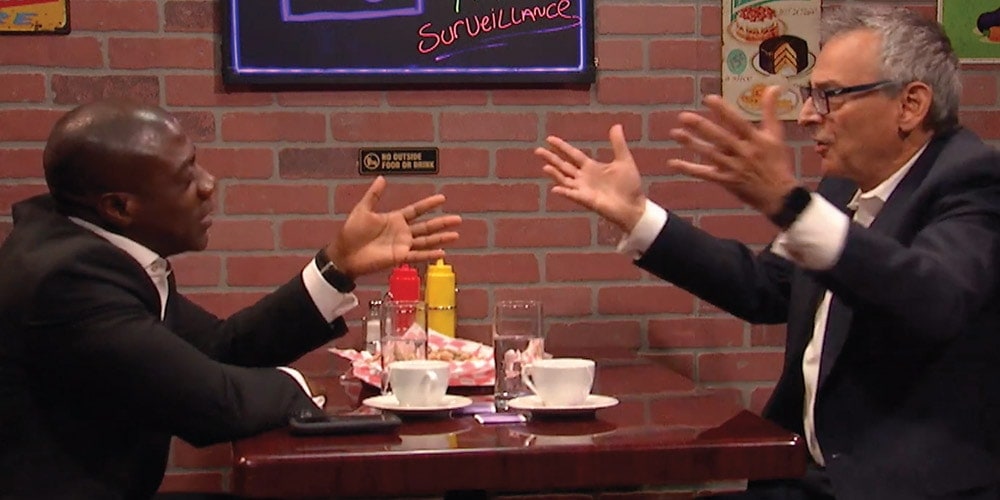 Growing up near the intersection of 14th and U streets in Washington, D.C., Rico Hill would often pass the busy intersection with his mother when she visited a friend nearby.

When Hill recently had an idea for a television show about today’s hottest topics, he went back to 14th and U. Looking at the crowds and stores and traffic, in a spot with as diverse a cross section of people as you can find in America, he said to himself, Boy, it would be great to come and talk to people here about the subjects that interest them, and call the show 14th and U. So we did it!

The new show is a weekly outing to 14th and U to ask people on the street for their thoughts about what’s happening in the world today—not what is top of mind for Christians or Seventh-day Adventists, but for the world in general. The kicker is to take those responses into a live discussion to find a topic’s moral grounding, and eventually its biblical center. He could think of no better avid conversationalists to handle these issues than Dwain Esmond and Cliff Goldstein.

In the show the two men sit at a booth in a café, ostensibly at 14th and U, and lead viewers extemporaneously into the details of, say, surveillance, fake news, or abortion law. They steer the discussion gradually toward foundational principles that are biblical—all in 15 minutes.

“This is not for Christians,” Hill said. “This is aggressively evangelistic, in that we’re there to get the opinions of those people. Then how do we take it and discuss it? We bring it into, I guess you could say, the moral center, or the metanarrative, to see what the Bible says.”

As the show’s developer and coproducer, Hill cares not only about the message but also the viewer experience. “If we’re doing something to attract people to Jesus, we are developing it even more to make sure that it’s watchable, appealing, attractive, high quality.”

The show has no typical TV show lead-in: it goes directly to the conversation between two thoughtful friends in the café. Video clips of people on the corner of 14th and U introduce the topic. Esmond and Goldstein comment on what the clips say, skillfully steering their conversation into what the subject means in the light of Bible truth. Viewers need no biblical background and do not feel preached at.

Gabriel Begle, director of digital platforms for Adventist Review Ministries and coproducer with Hill, sees the show as a modern way of using parables as Jesus did. “He [Jesus] took from what was common to people, the common discussions and topics, things they could touch and see, and used those things to explain what was completely unknown to them. You meet people where they are and start a dialogue about things that everyone is discussing,” he said.

The appeal of the show, Hill points out, is that current generations value authenticity above almost everything else. The street interviews are real; the conversations are real; the friendship of the two men is real. “You go along for the ride, and you get to listen in,” he said. The show’s relevance comes from dealing with matters that everyone is currently concerned about.

Flavor of the Day

One of the possible dangers for a weekly show on current topics is how frequently society changes the subject. Every news day brings new controversy and agitation. At the same time, as Hill pointed out, many of the issues troubling people today keep coming around again and again. They lead naturally to discussions about where the world is going and what prophecy can tell us. If anything, the cyclical nature of news, and vastly more open access to information, benefit a nimble show such as 14th and U, which takes on issues as they come up.

I asked Hill if the show will ever get political, and he said no. “We live in a culture of lies,” he said, “and where do you take that? We clearly can deal with that from the Bible.” He mentioned the example of Jussie Smollett, whose recent legal difficulties brought up questions of racism and truth, which, in a discussion, can lead to the idea that God is no respecter of persons; also, that Jesus came to tear down walls that people have put up between them. Ultimately, the problem is not color but sin.

As the show develops a following, Hill said, he intends to bring in an occasional guest to the café conversation—typically, someone who has written a recent, well-known book on the topic of the week; not a Christian necessarily, but someone who knows the issues well. Guests with a large social media following can open up exposure for 14th and U to new audiences. Hosts and guests will engage in unscripted conversations that bring in helpful expertise and a fresh perspective.

Hill said he believes that providence brought hosts Esmond and Goldstein to 14th and U. The two men have been friends for many years, are articulate and well informed, and often disagree on some aspect of an issue. If anyone could be asked to sit in a café and have a real conversation we all want to hear, these two would be the ones to do it, he said.

“You can’t leave out how God has been leading,” Hill said. “It’s not the wisdom of men. You start to see how everything was put in place without you doing certain things to make it happen.”

When he goes to 14th and U streets each week to meet people and interview them, Hill hands out cards with information about the show. The invitation is to “check out the matters that matter to you.” His intent is to draw ordinary people from all walks of life to hear sides of a topic they’ve never heard before.

Eventually, he said, the intent is to go into topics that challenge people, such as “seeing” loved ones after they die, and other false notions the public sometimes has. With so much current entertainment focusing on the supernatural, “we would be irresponsible not to address those false ideas.”

New episodes of 14th and U are being released every Friday on ARTv and will begin to populate a YouTube channel as the shows accumulate. Every show will also be released as a podcast.

Tim Lale is a freelance writer and editor.