‘Lettering with a Purpose’ 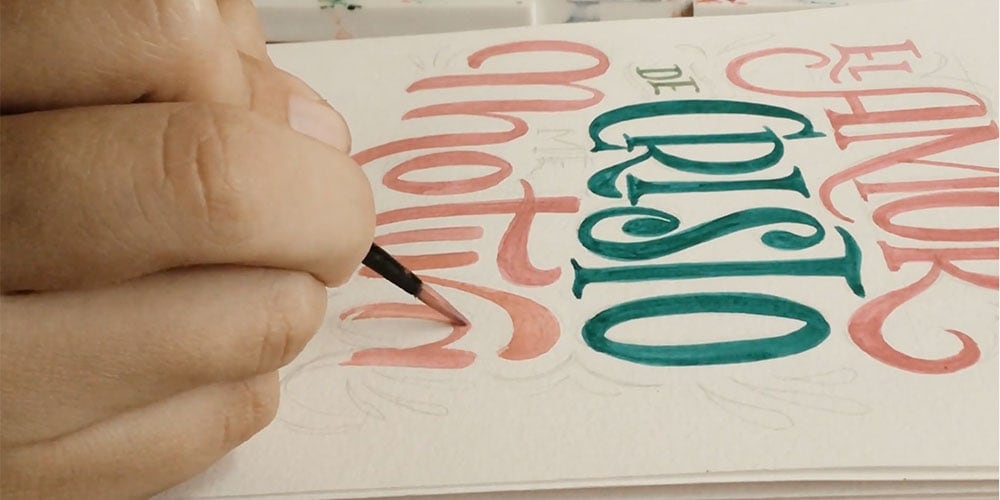 Ever since she was a little girl growing up in the Seventh-day Adventist church in Tuxtla Gutierrez, Mexico, Heidi Cartagena wanted to bless others with her voice by singing or preaching. But she was too shy. It wasn’t until she was in college that she found her voice through lettering — the art of drawing letters.

“I had been studying architecture for one year and decided to change to graphic design,” Cartagena, a third-generation Seventh-day Adventist, recounted. “While I was in graphic design, I came upon calligraphy, and later, lettering.”

She enrolled in a lettering course, which launched her ministry to share hope and love to a troubled world. After graduating in 2019 with a degree in graphic design, she got a job while learning about lettering.

“Sometimes I would spend seven hours straight practicing lettering, many times practicing from 5:00 p.m. to 11:00 p.m. on a Friday evening, preparing a Sabbath lettering message,” Cartagena said. She added that she was never good at drawing and remembers her first-grade teacher saying how pretty her penmanship was. She also remembers watching her father write out her and her sisters’ names. “I would take my crayons and draw names over and over.”

“It’s like God had a purpose in me because I always wanted to talk about Jesus, and this allows me to preach in a creative way,” Cartagena said. “I absolutely love this art.” She has always been active in church, creating lettering for youth activity signs, and done projects for church conferences, as well as Montemorelos University, the five Mexico union conferences, and the Inter-American Division of the Seventh-day Adventist Church.

Lettering became something special because it’s something that drew her closer to Jesus, she said. “This has allowed me to get to know Jesus personally and see Him move amazingly in my life,” Cartagena said. Today, she focuses on lettering full-time. Coined as “Lettering with a Purpose,” the ministry is inspired from verses she studies in the Bible and her personal day-to-day experiences. She said she listens to music and says a prayer before each lettering design so that it can come out beautiful and touch the hearts of people.

Cartagena shares how-to videos, lettering tips, practices, and inspirational experiences. She sells agendas, prayer journals, bullets, stickers, mugs, tote bags, and more on social media platforms. Her ministry has grown to 6,000 followers on Instagram, 4,000 on Facebook, and hundreds on her YouTube channel. But, she said, it’s not about the social media exposure. She is motivated by touching people with a message or verse that her followers need to hear at that moment.

“I don’t know who is going through a difficult time, but I’m committed to continuing sharing through this lettering ministry because it’s a ministry that touches people deeply,” Cartagena said. “People let their guard down when they see something beautiful, a message, a verse that reaches them.”

Cartagena recently took part in a city-wide campaign showcasing giant signs with positive messages in Mexico City. She met a graphic designer while studying and now works at an ad agency in the city. He invited her to participate in a public exposition by showcasing positive and motivational messages that could encourage people who have struggled during the pandemic. “He told me the signs could not have anything religious on them or mention God,” Cartagena said. Two of her lettering drawings were accepted for the exposition, which took place in the heart of Mexico City.

Her lettering ministry keeps expanding. “I keep depending on God, and He is helping me grow every day,” Cartagena said. It’s about sharing Jesus in every possible way you can, she said. “God has expanded my horizons and led me to understand that I don’t only want to share Jesus digitally but also physically, with products such as a journal, a mug, or the like as a way of testifying anywhere they are.”

“I am letting God continue to lead me and speak through my ministry into the plans He has for me each day,” she said.