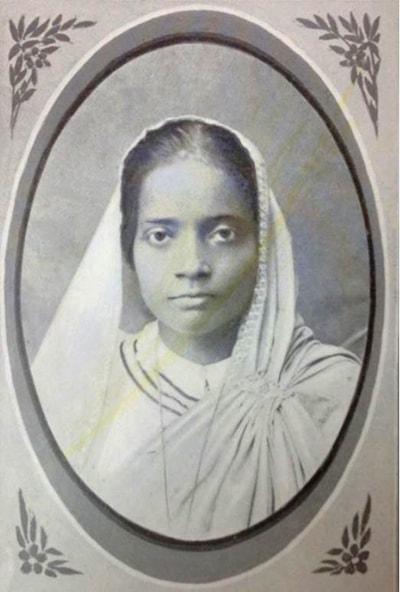 Kheroda Bose was the first to be baptized as an Adventist in India.

Kheroda was born about 1870 in a village near Calcutta (now Kolkata). Like most Indian girls at that time, Kheroda was married as a child. She lived with her parents until she was about 12, when she moved into the home of her in-laws. After that, she was not to leave the house except to go to the river with other women of the house to bathe. There at the river, Kheroda first learned of Jesus from a European woman who witnessed to them from a boat. Although opposed to learning about Jesus, Kheroda’s mother-in-law invited the woman home so she could teach the women how to sew.

One day, Kheroda’s father-in-law returned home unexpectedly and caught the women studying the Bible. He flew into a violent rage and banned the missionary woman from coming again. Young Kheroda, however, had learned to love Jesus and attempted to discuss Christianity with her husband. He warned her to forget it. Then her husband failed to return from school one day and was never found. Kheroda, now 14 years old, was blamed. Although Kheroda’s parents offered to take her back, her in-laws refused to part with her because she was contributing to the workload in their home. Kheroda’s life as a widow was miserable, and only her scant knowledge of Jesus kept her going.

Several years later, the whole family moved north from Calcutta to Benares, a Hindu holy city, so that the aged grandfather might be healed from an unknown infirmity. One day, the same missionary woman who used to study with them in Calcutta appeared at their door in Benares, distributing literature. The women recognized each other, and the missionary woman ministered to the discouraged Kheroda and helped her give her heart to Jesus.

One afternoon, when the household was asleep, Kheroda fled from the house. She boarded a carriage that was waiting nearby, and somehow providentially encountered the missionary woman, who was still distributing tracts by the roadside. After a brief stay at the mission, Kheroda was moved to a remote location. A mob hunting for Kheroda descended upon the mission compound, with the police having to intervene. The matter went to court, where the magistrate threw out the charge of kidnapping and allowed Kheroda, who by now was about 21 years old, to live at the Baptist mission. Her parents accepted her decision to become a Christian, recognizing that it was for her happiness, but they declared they would have to abandon her forever.

The Baptists enrolled her in a school for widows, and eventually, Kheroda received enough education to entitle her to teach the lower classes. Kheroda eventually opened her own school and became self-supporting.

Meanwhile, in 1896, D. A. Robinson, an Adventist missionary, opened his evangelistic series in a hall near Kheroda’s Baptist mission. The mission allowed Kheroda and a few other young women to attend the meetings, but the mission workers warned the girls against Adventist doctrines. Kheroda, however, was thrilled to hear about the Second Advent and absorbed all the teachings from the Bible. When she asked the Adventists whether they had any work for her, she was offered an opportunity to teach at the school they were opening in the region. The Baptists were reluctant to let Kheroda go, but eventually, they accompanied her to the Adventists and gave a “recommendation.” Kheroda joined Georgia Burrus, the first Adventist missionary to India, in teaching at the first Adventist school. Elder Robinson continued to teach her about vital Adventist doctrines, and soon she was baptized into the Adventist Church.

About this time, O. G. Place, a pioneer Adventist medical missionary in Calcutta, opened his treatment rooms and training facility in the city. Kheroda trained there as a nurse and joined the sanitarium in Calcutta. Years later, after her retirement, she went house to house, visiting women shut up in zenanas. She was a faithful member of the church in Calcutta, until she passed away on February 22, 1948. A love for Jesus and a personal relationship with Him marked her witness throughout her life of service.

And what a witness! Kheroda Bose, the first Adventist convert in India, rooted herself in the faith and confidence only Jesus can give. She not only embraced Adventism with all her heart and without any reservation, but gave her life to the ministry of Jesus. Kheroda also became the first Indian to serve the Seventh-day Adventist Church and to teach at the first Adventist school established in India.

Transformation Tips
The Ministry of Advocacy
Advocacy involves standing for what you believe. What is God calling you to stand for?