A Time of Challenge and Growth The West-Central Africa Division (WAD), consisting of 22 countries, is an area of the world that is rich and full of dynamic energy. It is also, at times, turbulent. In spite of the challenges of religious fundamentalism, social and political unrest, and the Ebola epidemic, the division was able to achieve positive results in evangelism during the past quinquennium that started with the launching of the Revival and Reformation initiative.

At the beginning of the quinquennium the West-Central Africa Division wrestled with spiritual lethargy. To combat that challenge, a leadership retreat for all pastors and their spouses was held at Babcock University in Nigeria January 5-11, 2011. A total of 2,201 attended. The division’s union officers and departmental directors were tasked with finding ways to help all church members in the army of God to spread the gospel. Church leaders were urged to organize spiritual retreats, conduct small group evangelism, and distribute copies of the inspirational book The Great Hope.

The Great Hope Project (Reach Out)

Several millions copies of The Great Hope were printed and distributed in the main four languages of our division (English, French, Portuguese, and Spanish), and many conversions throughout the division were reported. This gave encouragement and hope to the workers. Under the power of the Holy Spirit, this silent messenger reached people that could not have been won under normal circumstances, confirming the power of the printed page.

The West-Central Africa Division started the quinquennium with six unions (only one of which was a union conference), and 39 fields. Over a period of less than four years, the division has experienced dramatic growth in terms of reorganization of entities. To date, the division runs 10 unions, of which four are union conferences, and 66 fields.

The West-Central Africa Division has seen growth, not only in structural organization, but also in educational institutions. In 2010 the division had three universities in three countries. In the past five years, three more were added, bringing the total number to six universities in the division: Babcock University, Nigeria; Valley View University, Ghana; Université Adventiste Cosendai, Cameroon; Adventist University of West Africa, Liberia; Adventist College of Education, Agona, Ghana; and Clifford University, Nigeria. The number of elementary and secondary schools is also growing. An ambitious plan is under way to build 200 additional schools for each country in the West-Central Africa Division. This project is being accomplished in partnership with Maranatha International.

The church has stepped forward in its relationship with the government of Côte d’Ivoire. In 2012 the regional headquarters of the West-Central Africa Division received recognition as a diplomatic entity. This has helped tremendously with the work of the church. As part of the conferred allowances, the division benefits from customs duty and tax exemption on imported equipment, supplies, and materials meant to carry out the goals of the organization, and quick entry/exit procedures in line with the immigration for all WAD expatriate personnel and their families, and WAD consultants and visitors.

Religious extremism on the continent remains a challenge. To help counter it, the division organized the All-Africa Religious Liberty Congress, held August 6-13, 2013, in Yaoundé, the capital of Cameroon. For a few days, officials, scholars, religious liberty organization representatives, lawyers, religious leaders, and laypeople gathered to discuss the theme “Religious Tolerance and Peaceful Coexistence for the Sustainable Development of Africa.”

Several renowned leaders from the African continent and other parts of the globe spoke to the participants on a variety of topics, emphasizing the importance and need of religious freedom for all. An important guest, the president of Cameroon, His Excellency Paul Biya, president of the congress, was represented by his prime minister.

This quinquennium was highlighted with celebrations marking 125 years of the Seventh-day Adventist Church’s work in Ghana (2013), 100 years in Nigeria (2014), and 50 years in Togo (2014). The events provided opportunities to not only assess our presence in these countries but also to review our historic involvement in the life of these nations. These celebrations were also honored with the presence of government officials. In addition to expanding schools and church facilities, the West-Central Africa Division also expanded its housing facilities by building an eight-story apartment building in Abidjan. The project is almost completed. In addition, an existing guest house, Dibetou, was also fully renovated, and is now able to house delegates and visitors to various meetings held at the division headquarters, providing more comfortable accommodations.

The broadcast production facilities of the West-Central Africa Division have also been upgraded. The latest equipment installed, with help of media technicians coming from NAD and SAD, two sister divisions, now enables the division to produce television programs for Hope Channel Africa.

For quite a long time the West-Central Africa Division has been depending on additional financial support from the world church for its operations, but division leaders made a firm commitment to become financially self-sufficient. From 61 percent of self-support in the preceding quinquennium, the division moved to 98 percent, and then to 115 percent as of December 31, 2013. We praise God for achieving this goal!

In spite of the sociopolitical and spiritual challenges, during these past five years the WAD made a noticeable increase in soul winning. The big city evangelistic effort “Lagos for Christ” was a tremendous spiritual experience for the church in terms of conversions and media coverage.

Throughout the division other evangelistic endeavors with a special emphasis on small group evangelism also took place, bringing thousands of new souls into the family of God. From 2010 to December 2014 a total of 218,162 baptisms were recorded as a result of a combined effort by pastors and church members to reach beyond the 195,483 baptisms of the previous quinquennium (2005 to December 2009). For the West-Central Africa Division this past quinquennium has certainly been a time of revival and reformation.

The Five-Day Plan to Stop Smoking has not only helped people to experience a better quality of life as they do away with tobacco use, but has also proved to be an entering wedge, particularly in difficult areas where it is not easy to bring the gospel. This was experienced in Niamey, Niger, and Matamoulana and Nouakchott, Mauritania, two Islamic countries in the 10/40 window where these seminars were held successfully with good attendance.

In March 2015 Global Mission and the health department organized a stop-smoking program in Nouakchott, the capi
tal city of Mauritania. The program so impressed Islamic religious leader Sheikh El Haj Misry that he invited the facilitators to his home city of Matamoulana to hold a similar program. An unprecedented number of more than 500 people gathered to follow the program and ask questions. On March 17, 2015, a special session was held to help people stop smoking. The end of the program was marked with a special dinner with Islamic leaders. They all agreed with our facilitators that in this fight against tobacco the spiritual dimension plays a key part. Beside the health aspect, this program has given the church opportunities to testify of our Christian faith in a purely Islamic setting.

Imprisonment of an Adventist Gospel Worker

The various initiatives started and supported by the WAD called not only for patience but also for courage and determination. One pastor, Antonio Monteiro, a missionary in Togo, was falsely accused of murder. He was imprisoned for almost two years before being found innocent of the charges. His case was followed by millions of Seventh-day Adventists around the world. 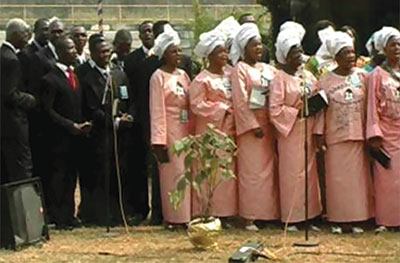 Côte d’Ivoire, Mali, Burkina Faso, Central African Republic, and Nigeria were particularly troubled during the quinquennium. In Côte d’Ivoire war has caused people and church members to move, leaving behind goods and properties. Many assets were lost. Our main secondary school, located in Bouake, became the headquarters of rebel factions.

In the Central African Republic the headquarters of the new Central African Union Mission was temporarily moved to another country because of the war. In Nigeria, the surge of violence associated with Boko Haram continues to be a threat.

The Ebola virus has been and still is a major challenge for the church in West Africa, particularly for the believers of the West African Union Mission, comprised of Guinea, Liberia, and Sierra Leone. As a result of this epidemic, thousands of people have been affected, and many division-wide programs had to be canceled.

The serious decrease of student enrolment prevented the school from getting financial resources for growth and development. The hope is that new leadership may turn things around for the next academic year, 2015-2016.

The GC President in the West-Central Africa Division

During this quinquennium our division was favored with two visits of General Conference president Ted N. C. Wilson. These visits rekindled the faith of our members, as they gathered in great numbers in various countries to welcome and listen to the counsel of their world leader. These huge gatherings also reinforced the church members’ sense of belonging to a world Adventist family, and proved to be helpful in creating links with local government authorities.