This year’s Annual Council may well be remembered as one of the most momentous and important such meetings in Adventist history. If likely to be historic, however, it is not unprecedented.There are remarkable parallels between the 1973 Annual Council and the 2014 meeting.

A little more than 40 years apart, the 1973 Annual Council met in October, in Takoma Park, Maryland, at the local Seventh-day Adventist church that lay adjacent to the General Conference office buildings; the 2014 Annual Council will meet in October in Silver Spring, Maryland, at the General Conference headquarters. The General Conference president, then Robert Pierson, chose as his theme “Revival and Reformation”; Ted Wilson, the current president, has adopted the same emphasis. The major issues facing the denomination and addressed by the Annual Council of 1973 also challenge the church today and will be addressed this year: mission to large cities and other challenging areas, secularism, financial concerns, and last, but very far from least, the ordination of women.

Despite the heavy agenda, however, and its potentially discordant character, the Annual Council of 1973 was memorable not for strident debate but rather for its strongly spiritual nature. A week into the meetings in 1973, a veteran church leader exclaimed: “I have never seen, never participated in, anything like what occurred here yesterday morning. I have attended many Annual Councils but never one where the Holy Spirit was present in such a pronounced and spontaneous manner.”1

The report in this journal, written by one of the associate editors of the time, expressed similar sentiments: “Simple words cannot convey adequately the mood and direction experienced by the 350 delegates.” The discussions were unlike those “to which church leaders have been accustomed during previous Annual Councils.” Instead, their “hearts felt the leading of the greater Agenda-Maker.” To be sure, “the mimeographed agenda was always there,” and leaders duly dealt with the “items that had to be resolved for the smoother operation of a phenomenal world organization.” But “the mood and motivation were different—and no one who was in the Council will ever be the same.”2

Not “Business as Usual”

President Robert Pierson later recalled that there was “little difference between business sessions and devotional periods.” In consequence, he wrote, this “was not a ‘business as usual’ session.”3

Pierson shared what went on behind the scenes, unrecorded by official minutes: “Before the business of the day . . . small groups of leaders met in the three General Conference offices, in hotels and motels and private homes, earnestly seeking the Lord in prayer.” Their supplications went beyond the usual requests that God work in His church. Pierson continued: “As leaders we were greatly burdened for our own relationship to God,” as well as “for the church over which He had made us overseers. . . . Both during the precouncil meetings and during the annual convocation . . . the leadership of God’s church” were engaged in “deep heart searching and prayer.”4

In addition to frequent prayer sessions, the spiritual tone of the 1973 Annual Council was set by 10 Christ-centered devotionals, delivered at the start of each day’s business meeting. The subject of each sermon had been assigned to the speakers months in advance. The objective, as with the prayer sessions, was both personal and missional, their purpose being “to spark a revival and reformation among the men and women who lead this church,” and to help them to identify “true priorities to the program of God—to make first things first.”5

On October 7, 1973, the first day the council met, Pierson preached a sermon entitled “God’s Priorities,” on Matthew 6:33, “seek ye first the kingdom of God, and his righteousness.”6 Speaking frequently in the first person, he acknowledged that the assembled administrators were “occupied with countless mundane problems” of church or institutional administration. As a result, our collective priorities had become skewed. The solution, he held, was for the leaders of God’s people first of all to seek God’s righteousness in their personal lives. Pierson concluded his sermon modestly and memorably: “I want to be the first to make a new commitment of my life and leadership. . . . Pray for me that I will be the kind of leader God needs.”7

C. D. Brooks, field secretary of the General Conference and eminent evangelist, preached on 1 Corinthians 1:18. He noted that, to reconcile the different factions in the fragmented church of Corinth, Paul pointed to the cross. At the cross, Brooks suggested, is tolerance, love for others, and humility: there we are all on equal ground. Thus the church finds unity in the cross of Christ alone. Brooks ended with a moving description of Christ’s suffering on the cross and concluded: “We need to spend time every day rehearsing that scene and then the cross will have its effect. . . . It will lead us to . . . our knees in order that we might have the power to do God’s will.”8

Five devotionals focused on “the place in revival” of repentance, the Bible, prayer, confession, and love. Ralph Watts, Sr., retired general vice president of the General Conference, highlighted the danger of “false revival,” and advocated that church leaders who wanted to lead authentic revivals should first embrace personal repentance: “If we are going to be pleading for a revival among our people, that revival must begin with us.”9 Reuben Nightingale, president of the Central Union Conference, stressed the need for God’s people to read the Bible, study it, be transformed and purified by it, live it, and preach it. “Plain, positive Bible preaching brings revival as it did on the day of Pentecost, as it did in Luther’s day, as it did in the 1844 movement, and as it will in the days of the final outpouring of God’s Spirit. The Word of God is basic to revival because the Bible is about Christ.”10

Adlai Esteb, retired from the General Conference Lay Activities Department, expounded on prayer in a witty and cogently argued devotional. He maintained that to experience revival we need to (1) pray frequently; (2) feed on the Word of God; (3) meditate on spiritual themes; and (4) love each other unreservedly, taking on “the character
. . . of Christ.”
11

Theodore Lucas, recently retired from the General Conference Youth Department, affirmed that in order to be revived we must come to grips with our sin, which means both confessing it and making restitution for it. He concluded in moving terms: “The greatest moment in a person’s life, barring none, is the moment when he hears the words, ‘Today salvation has come to you.’ ”12 Howard F. Rampton, associate General Conference Sabbath School director, suggested that Jesus told His followers to love because He realized “the need for some common tongue, some common language, some means of communication . . . that would be understood by everybody.” Jesus then provided the greatest demonstration of love on Calvary. If we let Him, He will live in us, and when “His love . . . [permeates] all that we do,” it will move the world.13

Results of Revival and Reformation

Most devotionals focused on revival, but Reginald Dower, the General Conference-based secretary of the Ministerial Association, addressed the nature and results of reformation. To Dower, “true reformation” is “bringing our lives into full harmony with revealed truth.” But this, he held, could be accomplished only by Christ dwelling in our hearts—and, he continued, when people see Christ in us, multitudes will unite with God’s people.14 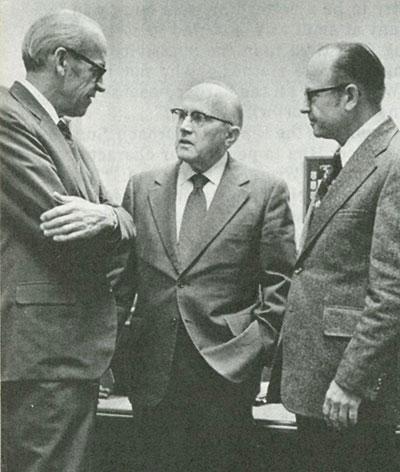 E. E. Cleveland, then one of Dower’s associate secretaries for the Ministerial Association, but best known as an evangelist, addressed revival and mission. He used simple language and concepts, but preached with a power still evident on the printed page, as he urged church leaders and church members alike to leave the prayer closet and share the good news of salvation with others. Drawing a pointed analogy, he declared: “When men play football . . . from time to time the team goes into a huddle. That’s Annual Council. But folks, there is a referee with a watch on that huddle. And if the team stays there too long, there is a penalty. . . . That has been our problem. . . . We’ve never had a poverty of huddles, I mean committee meetings.”15

“Looking Unto Jesus, the Author and Finisher of Our Faith”

As with most of the devotionals, Cleveland also honed in on the essence of the Adventist faith, “the everlasting gospel” of our Lord and Savior, who bade us, “Go ye therefore, and teach all nations” (Matt. 28:19). Cleveland declared: “Love is the motivation of our witness. Love to God, love to man. If we love God supremely, we will speak for Him. If we love man supremely, we will speak to him about Christ.”16

Christ was also the focus of veteran evangelist and General Conference vice president Ted Carcich, who delivered the final devotional on October 18. Drawing on Hebrews 12:1, 2 and 2 Timothy 4:7, he urged church leaders to “finish the race” and “keep the faith,” and declared: “The most encouraging thing about persevering in the Christian faith is that we do not persevere alone. We do not . . . run the Christian race alone. Thank God, Someone greater than we are . . . runs with us every step of the way. We are never alone, for Christ is not only ‘the author’ but ‘the finisher’ of our faith. It is Christ first and last and always.”17

What We Can Learn

The issues the Seventh-day Adventist Church faces at the 2014 Annual Council, and the potential ramifications of decisions, are too important for the prevailing spirit to be “business as usual.” Church leaders’ deliberations in 2014 need to have the same spiritual tenor as those in 1973. Now, as then, much time should be devoted to prayer before, after, and during “the business of the day.” Now, as then, pride—whether “of race, place, face,” or any other kind—should be renounced.

Looking beyond this October’s meetings in Silver Spring to the 2015 General Conference session in San Antonio, Texas, the 1973 devotionals have an enduring value for all Adventists, whether church members or church leaders. Every aspect of our lives (including our dealings with each other) must be permeated by the love of Jesus. We need to focus on Christ and Him crucified, since it is in the cross of Christ alone that we will preserve that unity for which our Lord, when facing the cross, prayed: “That they all may be one” (John 17:21).