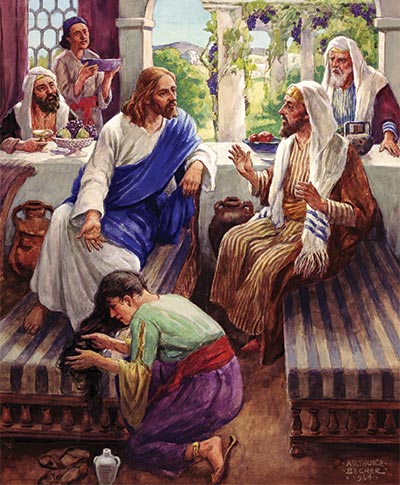 It’s always bothered me what Jesus said to Simon, that really bad people have an advantage in truly loving God. Why would He say a thing like that?

A Matter of Perspective

All four Gospels tell the story of Mary anointing Jesus. But Luke includes a statement by Jesus that I’ve found perplexing. He essentially tells Simon that those who have been forgiven much love God much, and those who have been forgiven little love God little (Luke 7:47). It’s as if He is telling Simon that only those people who have been “great” sinners can truly love God. Since I’ve always been a good, “moral” church girl, this seems quite unfair! Recently, however, the Holy Spirit gave me a new perspective that helped me understand Jesus’ statement better. In order to appreciate it, I needed to see the story from Simon’s perspective.

Simon was a Pharisee, and Pharisees kept the law. Simon’s only visible problem had been his leprosy. When Jesus healed him, Simon the Pharisee bravely declared himself a follower of Jesus. In gratitude and strategy he hosted a feast in honor of Jesus and invited Lazarus and many of the Pharisees and influential people in Jewish society to join them. What better way to help the Pharisees and Jewish leaders to accept Jesus than to have them fellowship together over a sumptuous meal?

All went well until Lazarus’ famously sinful sister slipped in and gave her gift to Jesus. She fell at Jesus’ feet, sobbing her gratitude for the change He had wrought in her life. She used her own tears to wash the dust off His feet. Her hair was the towel that dried them. Then she broke the alabaster vial of expensive perfume and, between her kisses, rubbed every drop into Jesus’ feet.

Simon was not pleased. Reformed or not, Mary was an embarrassment to his house. More important, her actions, Jesus’ acquiescence, and the permeating perfume were destroying all possibility of reconciliation between Jesus and the Pharisees. Simon could not understand how Jesus, a prophet and healer, could let this woman touch Him, knowing it was destroying His own reputation.

Jesus knew what Simon was thinking and told him a story of two debtors who owed the same lender—one 500 denarii, and the other 50. One denarius being a day’s wages, the first debt amounted to nearly a year and a half in wages; the second, only two months. Neither debtor could pay, so the lender forgave them both. “Which debtor do you think,” Jesus asked Simon, “loved the lender more?”

“The one who owed more.”

“Correct.” Then Jesus said, “For this reason I say to you, her sins, which are many, have been forgiven, for she loved much; but he who is forgiven little, loves little” (Luke 7:47).1

There it is, that disturbing statement! Simon must have been as upset by this statement as I am. After all, Simon and the woman were both giving a gift to Jesus out of gratitude for what He had done for them. Both gifts were costly. In fact, for all we know, Simon’s feast may have cost more than Mary’s vaunted perfume. Besides, Simon’s gift was planned not only to honor Him but to improve Jesus’ relationship with the Pharisees. Mary’s aromatic gift was obviously not well thought out, or she would have done it at a more decorous time and place with water and towel handy. And yet Jesus seemed to be much more pleased by Mary’s gift than by Simon’s, because Mary, having been forgiven the “greater” debt, loved Him more than Simon.

Does it mean that the only way I can truly love God is to go out and be a “great” sinner so that God will have a lot to forgive me for? Paul strongly disagrees: “What shall we say then? Are we to continue in sin so that grace may increase? May it never be!” (Rom. 6:1, 2).

Then what exactly is Jesus saying? What truly was the difference between Simon and Mary? Was it the size of Mary’s sin, or is there something deeper going on here?

These were the questions that plagued me until the Holy Spirit showed me that in reality, Simon’s and Mary’s debts were equal. For “all have sinned and fall short of the glory of God” (Rom. 3:23). “All our righteous deeds [Simon’s and Mary’s included] are like a filthy garment” (Isa. 64:6). But whereas Mary had obvious sins that everyone could identify and condemn her for, Simon’s sins were hidden. Whereas the woman recognized her need of forgiveness and a Savior, Simon had no obvious sins, and felt little need for forgiveness or a Savior. The wretched truth is that he “had led into sin the woman he now despised.”2 Small wonder, then, that Jesus could thus excoriate his group: “Woe to you, teachers of the law and Pharisees, you hypocrites! You are like whitewashed tombs, which look beautiful on the outside but on the inside are full of bones of the dead and everything unclean. In the same way, on the outside you appear to people as righteous but on the inside you are full of hypocrisy and wickedness” (Matt. 23:27, 28, NIV).3

The problem for Simon and me is that God is far more concerned about what’s in my heart than what I do. “The Lord doesn’t make decisions the way you do! People judge by outward appearance, but the Lord looks at the heart” (1 Sam. 16:7, NLT).4 Hence Jesus defines even the thoughts of murder and adultery as sin (Matt. 5:21-48). Why? “For out of the heart come evil thoughts, murders, adulteries, fornications, thefts, false witness, slanders. These are the things which defile the man” (Matt. 15:19, 20). In other words, sin is born in the mind.

Outwardly speaking my sins may seem few and my debt small. I am grateful for forgiveness for this debt, but I am not overwhelmed with gratitude. However, when I let God show me the “bones of the dead and everything unclean” inside my soul, then I realize that, like Paul, I am the “chief of sinners.” I recognize the magnitude of my debt, and God’s forgiveness takes on a whole new meaning.

This is what Simon lacked. He was truly thankful that Jesus had healed him of leprosy. He truly wanted to show his gratitude. But the Holy Spirit had no freedom to expose his hidden sin, and he sought no forgiveness for them. He was forgiven little and loved little.

Now instead of feeling left out when I see “great” sinners expressing their deep love for the God who has redeemed them, I pray that God will open my eyes to see the “great” sin within my own heart; to see with clear vision the exceeding sinfulness of all sin—seen or unseen—and to ask for His forgiveness of my “whole” debt. Then I too will be able to love much because I have been forgiven much.