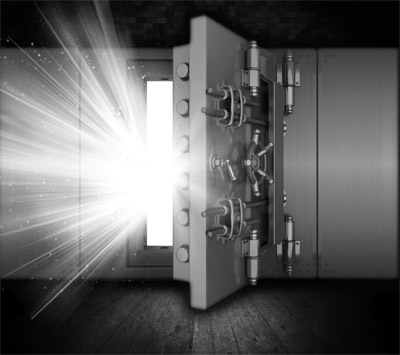 God doesn’t seem to mind secrets. He keeps them. He works with them for our good and beyond our understanding. Sometimes He is even more eager to share than we are to hear.

The Secret of Our Making

David has reflected out loud on one of God’s biggest secrets: “My frame was not hidden from you when I was made in the secret place, when I was woven together in the depths of the earth” (Ps. 139:15). David’s making, as with yours and mine, and just as surely with every bird or bee, fish or tree, is a secret of God’s doing. Sure, human eyes and electron microscopes have peered into the secrets of womb and embryo, molecule and atom, and such deep places of the earth. And sure, there are accessible explanations of what transpires between eggs and sperm, or even without any such cooperation, through parthenogenesis.

But there is a severely limited connection between observing life at its various stages and discovering the secret of creating life. Believing that laboratory operations bring us closer to reproducing Genesis 1:1 is equivalent to figuring out how arc welding torches, gloves, and goggles produce steel. Scientific ingenuity may repair limbs, trunks, or wings. It may create after its own image, producing things that efficiently or clumsily reproduce the very actions their own inventors perform. Geniuses may match their products in teams that help each other in rescue operations or compete against each other in team sports.

And they may design robonauts. Yorichika Nishijima recognizes that the Russians were the first to go into space, and the Americans the first to step onto the moon. He, in turn, is on his way to making the Japanese the first to send a communication-astronaut robot into space. Mirata, his mannequin, does calisthenics and greets you with a bow, “Konichiwa! I am a backup crew member. Nice to meet you.”1 In fact, during the last week of June, more than 1,000 soccer-playing robots and fans from 40 countries descended on the Dutch town of Eindhoven, a technological mecca, for the latest stages of a fascinating competition whose goal is to beat humans at their own ball game by the year 2050.2

And yet humans’ most sophisticated scientific efforts at engendering bring us no closer to discovering God’s secret of beginnings. Our success is no more than an act of grateful borrowing by those who acknowledge His sovereignty, or intriguing tampering by others who view their own brain as no more than a very complicated accident. Believing or otherwise, we are still clueless as to how to invent life. Creation is still God’s secret.

The Secret of God’s Tent

Secrecy often implies intimacy—little girls giggling together, whispering into each other’s ear. God too has a secret that means intimacy. It is a place of safety “from the accusing tongues” (Ps. 31:20), the ominous conspiracies, the threatening language, the vicious gossip that first wounded Him and still draws emotional blood. It may be called a tent (Ps. 27:5). But it is clearly no mere goatskin abode that can be overwhelmed by wild sandstorms, violated by hostile intruders, or overrun by assailing armies. It is a tent where the God who is the author of being has guaranteed the life and safety of His own. It is a place where His vulnerable children may know much more than mere preservation. It is a tent whose security provokes the boast of being established “upon a rock.”

And it is both secure and intimate. The Lord does not spirit us away to some lonely dungeon for the sake of safe keeping. Not so. Rather, it is in His very presence, literally “His face,” that we may know the fullest confidence (see Ps. 31:20). Looking upon the face of our God, we no longer need tremble at enemy threats. We progress from timidity to boldness: “When I am afraid, I put my trust in you. In God, whose word I praise—in God I trust and am not afraid. What can mere mortals do to me?” (Ps. 56:3, 4).

Whereas the intimacy of His presence is secret, the identity of His tent is not. “Have them make a sanctuary for me, and I will dwell among them,” He told Moses (Ex. 25:8). The structure called “sanctuary” (miqdash) is equivalently referred to as a tent of meeting (’ohel mo’ed). It is God’s place of dwelling among the tents of His people. That it is called a sanctuary emphasizes His holy distinctness. That it is a tent underlines His commitment to community. He will live among His people—according to exhaustive and particular instructions. A fence all around His tent would mark it off as special. A place for priests to wash before entering would emphasize the importance of cleanliness. And there would be a veil that distinguished the first from the second compartment of the tent. In the inner secret that was that second compartment of His meticulously constructed tent, He would present Himself. A box—called an ark—sat there in that second compartment. It contained stone tablets where, with His own finger, He had written the words of His covenant agreement with His people. The cover of the box was flanked by representations in hammered gold of two heavenly beings called cherubim. And “there, above the cover between the two cherubim that are over the ark of the covenant law,” He promised, “I will meet with you” (verse 22).

The Purpose of Meeting

What would be the purpose of these encounters? Back then they were of a most rare sort, though Moses, whom He addresses in Exodus 25:22, seemed to have had no schedule restrictions as high priests would for centuries thereafter (Lev. 16:29-34). He and His God had their own one-of-a-kind relationship. They talked face to face (Deut. 34:10), as human friends do (Ex. 33:11). The entire book of Leviticus seems to belong to this setting of inner sanctuary communion (Lev. 1:1). “The Lord confides in those who fear him” (Ps. 25:14), as Moses did. So God could summon him to the special place of meeting. “I will meet with you,” God said, “and give you all my commands for the Israelites” (Ex. 25:22). Evidently the purpose of this special place in the second compartment of God’s tent was not to establish exclusiveness or communicate esoteric mysteries shared only by initiates.

Those who have misunderstood the divine purpose, and a supernatural enemy who seeks every means possible to distort God’s character, have at times attempted to unite the sacredness of religion to the mischief of manipulation. God, they know, is holy, pure, separate from sinners, and high above us all (see Heb. 7:26). Hungry as Lucifer for mastery, they develop rules of taboo or sacredness that serve no more spiritual purpose than artificial distance that increases the power of the individual or group, by augmenting secrecy and complicating access. The prospect of learning secret words, signals, and gestures, or of acquiring new names, fetishes, and garments, greatly enhances the value and attractiveness of initiation however challenging, as well as the influence and authority of the initiators. It is both a distortion on deity, and a petty theft of His supreme authority. Hazing dies hard because Eve’s curiosity to taste forbidden fruit now expresses its twisted self in college coeds craving membership in esteemed sororities. The Dionysiac and Eleusinian mysteries of ancient Greece well illustrate the power of secrecy and the importance of initiation. Though these mystery religions eventually offered participation to anyone who so chose, their democratic character did not diminish the manipulative power of controlled access. The rituals of these cults were kinesthetic rather than scriptural, active rather than verbal. Thus “it was not possible to disclose to the noninitiated the mysteries by words, but it was treachery to reveal the secret dances.”3

The God of the Bible and the truths of His Word bear no relation to any such manipulative mystification. “Come to me,” He says, “and I will give you rest” (Matt. 11:28). His invitation echoes through time’s corridors as hearers repeat the invitation, coming themselves as they invite whoever wishes to join them and “take the free gift of the water of life” (Rev. 22:17). God says “Come!” much more than “Wait!”

Getting Out the Secret

One who truly came to understand this was Paul. He strove to get the word out to the worlds of his genes and learning, the Jewry of his natural inheritance, and the Greco-Roman culture into which he was free born. Getting God’s secret out to the worlds that needed to know would cost him his life. But it had to be told. Indeed, its telling does not, as some assume, begin with Paul. The great and learned apostle does not represent himself as privy to some truth otherwise denied to humans. The message that he calls “my gospel” may have been a secret from ages past. But it should be lost on no one that its proclamation is by divine order, “the command of the eternal God.” Beyond this, its revelation that God, far from being inaccessible, has come to us in Jesus bringing salvation to whoever will believe, is a truth that was being “revealed and made known through the prophetic writings” (Rom. 16:26). The glorious riches of the mystery of Christ as hope that God would share with the Gentiles (Col. 1:27), was not concealed until the birth or conversion of Gamaliel’s famous student. He may have become one of its most celebrated exponents. But the secret of salvation through the God who tents in flesh among us, is the truth that through the ages was being proclaimed and set forth by God’s servants the prophets.

Neither is God standoffish, nor was it ever His will that His revelation become ethnically or nationally partial. The prophets spoke to the nations because their commissioner was Lord of all. And their writings were ever meant as His lyric of hope for everyone everywhere. Thus the Seed of the woman would crush the ancient serpent who deceives the whole world (Rev. 12:9); through Abraham, and particularly through his Descendant, all families of the earth would be blessed (Gen. 28:14). And when national sentiment threatened to obscure His universal purpose God reminded through Isaiah that faithful foreigners would have just as much access as Abraham’s putative descendants, for the temple, His house, was meant to be everybody’s worship room, “a house of prayer for all nations” (Isa. 56:6, 7). Malachi’s word of hope was Elijah’s return to reunite families, saving the earth from God’s vengeful day (Mal. 4:1-6). Neither his threat (verses 1-3) nor his promise of deliverance (verses 5, 6) is properly read as exclusive to Israel.

Salvation is no secret that God tried to hide. It is a mystery as profound as Creation, which, though incomprehensible to us humans, God would have the whole world know: as surely as the heavens declare His glory, so surely does the world need to hear of His salvation. As clearly as He has made His power and Godhead known, so that no atheist or agnostic may justify themselves before God (Rom. 1:20), so totally committed is He to proclaiming to every nation and clime of humanity His salvation and redemption from Satan and sin. “Come,” He insists, through the words on this page. Come, grasp His longing and plan to take you to Himself, where you will share the blessing of His company for ever, eternally free and treasured in the secret of His beautiful presence where we shall see His face and bear His name (Rev. 22:4).