“In Ethiopia, the lives more changed were ours.” 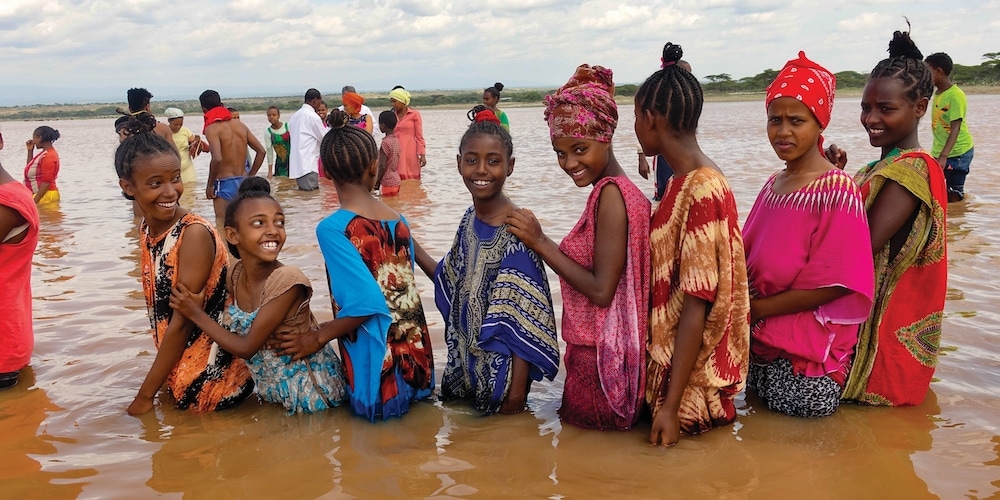 By: Yves Monnier, It Is Written, and Adventist Review

It Is Written (IIW), a U.S.-based supporting ministry of the Seventh-day Adventist Church, organizes overseas mission trips every year. In July 2019, a team from IIW held evangelistic meetings and health care outreach in Ethiopia. Below, IIW director of evangelism Yves Monnier describes his team’s experience.—Editors

Our mission trip to Ethiopia was a difficult one for those of us dependent on things considered luxuries there: electricity, running water, Wi-Fi, and traffic rules, among others. Despite all these challenges, albeit small ones when I’m reminded of the hard lives people endure in the country, this has been a most rewarding trip for everyone.

Two-thirds of our team of 30 were health professionals. We had doctors representing diverse specialties, dentists, a doctor of public health, nurses, and wonderful support staff. They worked tirelessly and seamlessly to meet the huge health demands in Negele, in the Oromia region.

One thing that frustrated our doctors was to see treatable cases that couldn’t be treated there because of lack of equipment and medication. As an example, one of the patients they saw was a man with a disfiguring growth on his jaw (due to chewing tobacco). After multiple surgeries and the right treatment, this man could have had a chance at a normal life. But where he lives, that condition will kill him. And he’s in his 20s. It was heartbreaking to face situations like these.

On the other hand, our people had a profound impact on so many people. One of our obstetrics doctors stumbled upon a woman in labor. Things were not going well. He quickly assessed her situation and determined that the baby was in distress because something was wrong with the umbilical cord. He ordered the woman to be rushed for an immediate C-section.

A little while later, a healthy and screaming little girl was born. Sure enough, the umbilical cord was in a knot and was tightening with every minute passing. Had they waited any longer, the baby would have been stillborn. By God’s grace and mercy, our dear doctor saved the little girl’s life. You can imagine how thankful and joyful the parents were at the turn of events. They came close to mourning a death instead of celebrating a new life.

We came back with countless stirring stories like this one. Some of the best came from Jacob Prabhakar, from Eyes from India, who conducted 1,028 cataract surgeries. Imagine hundreds of patients in line to see him — an amazing sight. The best part is the fact that they have sight now. These people were jumping with joy because they could see again. Lots of embraces and smiles accompanied every consultation. The most astounding thing? All 1,028 surgeries were a complete success! Praise be to God.

At the same time, preachers at the six It Is Written sites did a phenomenal job. In our schedule, they were supposed to have Thursday nights off. Do you think that happened? Absolutely not! People wanted to hear the Word, and our preachers displayed unlimited energy. In health or sickness (yes, some of us got sick), they preached their hearts out. I got to sit in the back and feel blessed to hear their heartfelt messages.

I was there when one of our preachers made an altar call. Stumbling in from outside the church, a man came forward. He had heard the sermon outside because at most sites they not only have speakers inside the church but outside as well, so that anyone within 300 yards (about 275 meters) can hear the presentations. The man listened to the message from outside and came forward.

It was the rainy season in Ethiopia, which meant it rained every day. Just when you thought it would be a beautiful day, the rain came. It is something that muddies up roads and makes movement very difficult. However, people kept coming.

I preached one night at a site where people were under a large canopy, and the stage was 30 feet (about 9 meters) away, also under a canopy. While I was preaching, a sheet of rain separated the people from me for a while. No problem. They were there, and I preached.

One thing I noticed is that when our preachers were done, meetings were not quite over. The local pastor or lead person would stand up and preach another mini-sermon with a passionate appeal for a decision. Even though I didn’t understand a word he said, I somehow knew exactly what he was saying, and people responded.

The grand finale of our two-week mission trip took place when, on the last Saturday (Sabbath), more than 2,000 people attended our worship service. At the end of my sermon, I made an altar call. At first very few moved, and then the congregation spontaneously started singing. It was a God moment, because that’s when people started streaming down.

As soon as the worship service was completed, the It Is Written team was whisked away to the shores of Lake Langano, where hundreds of people had gathered to be baptized. On that day, the picturesque lake surrounded by rolling hills became a giant baptistery.

Our pastors joined the local pastors to baptize 440 people. The age of those baptized ranged from children to a 100-year-old woman—a reminder that it’s never too late to make Jesus first in your life. The smiles of all the people coming out of the water said it all.

Saved lives and saved souls. Yes, it was a great mission trip. And, without question, the lives most changed were ours.

This commentary is based on the author’s accounts posted by It Is Written.