He Prayed, Sang, and Trusted 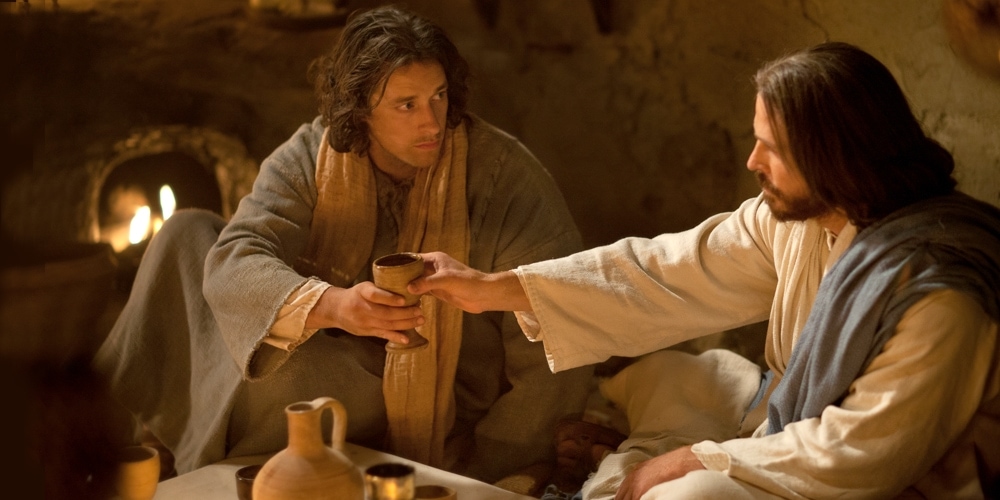 It came during Israel’s highest celebration. Jesus’ supreme trial. Two weeks into the Jewish new year (our March/April)—a time of spring, new life, and the high Passover festival—Jerusalem was bursting with thousands of people. Out-of-towners camped everywhere. Crowds were so thick that one could hardly pass through the narrow city streets. That very morning, with every room filled, Jesus had said to Peter and John, “Go and make preparations for us to eat the Passover” (Luke 22:8).1

“Where?” returned their astonished reply.

Where, indeed! Yet, Jesus gave them astonishing directions exactly on how to find a large available guest room.

Reclining at the room’s table that evening, Jesus sat with His closest disciples. The Passover dinner was spread before them. Festivities were usually lively, celebrating liberation from Egypt—a Jewish Independence Day party. Yet, Jesus suddenly became quiet, pensive. Every dish spoke both of history and His impending anguish. Bitter herbs—most likely lettuce, endive, and chicory—were symbolic of their ancestors’ bitter bondage. Even as they celebrated their nation's freedom, however, Jesus considered their present, even greater, slavery. Not so much to the Romans, but to sin and death.

The perfect lamb on the table’s center was a symbol of Himself, “the Lamb of God, who takes away the sin of the world!” (John 1:29). With the setting of the sun that evening, the critical drama had begun; and before its setting the following day, all would be over. Jesus’ blood would flow as freely as grape juice had filled their cups. Blood (His blood!), death (His death!) would make the people holy (Heb. 13:12).

But what would happen in this final, horrendous test? How would He endure it? The betrayal by His long-time treasurer, one He’d tried so hard to reach. The abandonment by His dearest friends. The physical pain of whips and thorns draining away His life. The heavy cross. The driven nails. How would He cope with the emotional pain of lies, slander, and rejection? The cold, calculating hardness of those He simply desired to save? The taunting scorn and humiliation? How would He bear it all and not fight back? And not shout, “Enough!” Or call down supernatural forces on His abusers? Could He yet hold fast while Satan's worst demons were unleashed? Could He keep from falling into despair and self-pity, calmly trusting His Father through it all?

He could. And He did.

How about us? In the face of trials, how do we follow the steps of Jesus through His “last” night on earth? I offer nine suggestions:

1. Recite God’s Word.
Despite the impending trial’s enormity, Jesus recites the first two chapters of the Egyptian Hallel with joy: “Praise the Lord. . . . Let the name of the Lord be praised, both now and forevermore. From the rising of the sun to the place where it sets, the name of the Lord is to be praised. . . . Who is like the Lord our God, the One who sits enthroned on high. . . . He raises the poor from the dust and lifts the needy from the ash heap; he seats them with princes” (Ps. 113:1-8).

Recounting God’s love for us and memorizing His promises will make our hearts surge with new strength. The psalmist says, “I have hidden your word in my heart that I might not sin against you.” “Your word is a lamp to my feet and a light for my path.” “Great peace have those who love your law, and nothing can make them stumble” (Ps. 119:11, 105, 165). Let’s love God’s Word. Let’s memorize its promises. They will infuse us with God’s enduring strength.

2. Encourage others.
Long into the night, following the meal, Jesus discoursed with His followers. He offered comfort, showed the way to the Father, explained future events, and promised the Holy Spirit (John 13-16). “In this world you will have trouble,” He said. “But take heart! I have overcome the world” (John 16:33).

Amazing! Jesus was facing trouble greater than any will ever know, yet He encouraged His friends for their own trials. Soon they, too, would struggle with disappointment, doubts, confusion, fear. They’d become outcasts and martyrs. Encouraging them, Jesus confidently said, “Take heart! I have overcome the world.”

Paul wrote, “Encourage one another daily . . . so that none of you may be hardened by sin’s deceitfulness” (Heb. 3:13). Encouraging others encourages ourselves. It keeps us from succumbing to distrust, doubt, depression, and worry.

4. Sing praises.
“When they had sung a hymn,” the text says, “they went out to the Mount of Olives” (Matt. 26:30). Praise has power to uplift like nothing else. Paul encourages, “Speak to one another with psalms, hymns, and songs from the Spirit. Sing and make music from your heart to the Lord, always giving thanks to God the Father for everything, in the name of our Lord Jesus Christ” (Eph. 5:19, 20). Often it’s while we’re praising that God delivers. “Jehoshaphat appointed men to sing to the Lord and to praise him for the splendor of his holiness as they went out at the head of the army, saying: ‘Give thanks to the Lord, for his love endures forever.’ As they began to sing and praise, the Lord set ambushes against the men of Ammon and Moab and Mount Seir who were invading Judah, and they were defeated” (2 Chron. 20:21, 22).

Severely beaten, ankles painfully bound in shackles, Paul and Silas were thrown into prison. Yet about midnight they began “praying and singing hymns to God, and the other prisoners were listening to them. Suddenly there was such a violent earthquake that the foundations of the prison were shaken. At once all the prison doors flew open, and everybody’s chains came loose” (Acts 16:25, 26). There’s power in praise.

5. Acknowledge God’s power.
Have you ever wondered what hymn Jesus and the disciples sang as they went out? Perhaps it was from the Psalms—perhaps from Psalm 115: “Not to us, Lord, not to us but to your name be the glory, because of your love and faithfulness. Why do the nations say, ‘Where is their God?’ Our God is in heaven; he does whatever pleases him. . . . You who fear him, trust in the Lord—he is their help and shield. The Lord remembers us and will bless us: . . . he will bless those who fear the Lord—small and great alike” (verses 1-13).

If that’s what they sang, Jesus, as He sang, perhaps thought of the miracles God had performed through Him—the sick made well, the dead raised, demons cowering to His command, food multiplying, wind obeying His orders, etc.

Powerful! That’s what our Father is. God merely spoke, and created life—complicated, intricate existence—out of nothing. That same God can deliver us from whatever humanly impossible situation we might be in. So, let us take our eyes off the mountainous problems and fix them firmly on the Mountain Mover. “I will go before you and will level the mountains. . . . I will give you hidden treasures, riches stored in secret places, so that you may know that I am the Lord, the God of Israel, who summons you by name” (Isa. 45:2, 3).

6. Remember God’s past goodness.
“I love the Lord, for he heard my voice; he heard my cry for mercy. Because he turned his ear to me, I will call on him as long as I live. The cords of death entangled me, the anguish of the grav
e came upon me; I was overcome by distress and sorrow. Then I called on the name of the Lord: ‘Lord, save me!’ . . . When I was brought low, he saved me. Return to your rest, my soul, for the Lord has been good to you. For you, Lord, have delivered me from death, my eyes from tears, my feet from stumbling, that I may walk before the Lord in the land of the living” (Ps. 116:1-9).

From His earliest memory, God was Jesus’ constant companion.

Has God been good to you? Then pause, and praise! Record every deliverance. Read them often. The psalm writer declares, “This is my infirmity: but I will remember the years of the right hand of the most High. I will remember the deeds of the Lord; yes, I will remember your miracles of long ago. I will consider all your works and meditate on all your mighty deeds” (Ps. 77:10, KJV; 11, 12, NIV). Recall God’s rescues, His incredible promises, and be at rest.

7. Trust implicitly.
“I will not be afraid. What can mere mortals do to me?” Jesus continued singing that evening, as I picture it. What, indeed, could humans do? “The Lord is with me; he is my helper. I will look in triumph on my enemies’” (Ps. 118:6, 7).

Where is your trust? Is it bound up in financial stability—a job, retirement plan, stocks and bonds? Does your safety depend on police, locks, and weapons? Suppose these things (and a thousand others) abruptly disintegrate, then what?

David said, “Some trust in chariots and some in horses, but we trust in the name of the Lord our God. They are brought to their knees and fall, but we rise up and stand firm” (Ps. 20:7, 8). May your anxieties be swallowed up in complete trust, and may you be at rest in God.

God gives victory! When Elisha’s servant saw a strong army force surrounding the city, he despaired! But Elisha calmly replied, “‘Don’t be afraid. . . . Those who are with us are more than those who are with them’. . . . Then the Lord opened the servant’s eyes, and he looked and saw the hills full of horses and chariots of fire all around Elisha” (2 Kings 6:16, 17).

With God, victory is assured.

9. Imagine celebration.
“Shouts of joy and victory resound in the tents of the righteous: ‘The Lord’s right hand has done mighty things! The Lord’s right hand is lifted high’; . . . I will not die but live, and will proclaim what the Lord has done. . . . Open for me the gates of the righteous; I will enter and give thanks to the Lord. . . . The stone the builders rejected has become the cornerstone; the Lord has done this, and it is marvelous in our eyes” (Ps. 118:15-23).

When you hold faith firmly, trusting implicitly, shouts of joy and victory resound! Can you envision the yet more magnificent celebration when we triumphantly enter heaven? The whole creation will explode with delight! Joining the festal procession, waving palm branches, right up to the very throne of God, we will bow in worship, rejoicing and singing with inconceivable happiness, “You are my God, and I will praise you; give thanks to the Lord, for he is good; his love endures forever” (verses 28, 29).

Dolores J. Moore, at the time of writing, was the prayer ministry and kindergarten leader of the Grass Valley, California, church. This devotional was originally published in Adventist Review on June 23, 2005.

1Unless otherwise noted, all Scriptural quotations are from the Holy Bible, New International Version®, copyright ©1973, 1978, 1984, 2011 by Biblica, Inc®. Used by permission. All rights reserved worldwide.

Uncategorized
Meditation on a Dead Star
It’s time to start living for God in the now.