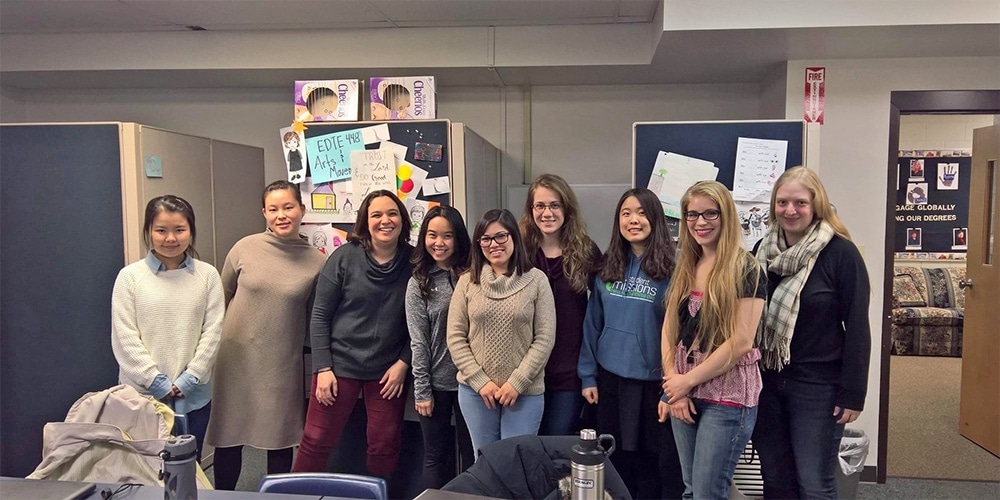 By: Hannah Gallant, for Lake Union Herald, and Adventist Review

Old textbooks, a whiteboard, dried glue sticks, half-sharpened colored pencils, crayons — these were the things with which young Rachel Heffelfinger played as she made lesson plans and graded for her imaginary class.

“I always thought I would teach kindergarten, because I loved little kids,” she says.

Rachel had a simple plan: go to college, move back home to rural Ohio, United States, and teach at a public school in the local area, preferably within the county in which she’d grown up.

Looking for a Christian Environment

When it came time to choose a college, Rachel wanted to go to a Christian university. She had attended public school previously and knew what it was like to be the only Seventh-day Adventist. “I wanted a Christian environment, close enough to go back home if I wanted to.”

Growing up, Rachel lived two hours away from Andrews University. She would go to the campus at least once or twice a year. Everything pointed to Andrews, except for finances. But then the pieces began to fall together. Rachel’s mom got a job at Andrews. “If she hadn’t been there, I wouldn’t have been there,” Rachel says.

Rachel’s resolve to be a teacher never wavered during her time at Andrews. She started her bachelor’s degree in Secondary Education and Integrated Science and didn’t look back. Although it is a five-year program, Rachel’s goal was to complete it in four years.

“The physics department quickly became my second home,” she says. “The people were always open and welcoming. When I had time in between classes, I would often visit with the administrative assistant or study in one of the extra rooms.”

During the second semester of her freshman year, Rachel sat in a hard-back pew in Pioneer Memorial Church (PMC) on a Tuesday morning during Week of Prayer. The speaker that day presented on student missions. Rachel had always determined she would never be a student missionary, but, as she sat there, she had a distinct thought: “You are going.” She tried to push it away, but it kept coming up — a gentle, persistent nudge.

“Sophomore year rolled around, and I’m thinking, ‘I still have years to go. I don’t have to worry about this,’” she reflects.

Rachel continued to push thoughts of student missions away. She buried herself in her classes and her leadership role in the Astronomy Club. In her free time on weekends, she volunteered at the Kingman Observatory.

For Rachel, stars were a connection to her home in Ohio. “It started with bonfires on most Friday nights in the summer. After dark with my dad, we would watch the stars. I learned to love the natural beauty of the stars,” she explains.

At Andrews, stars remained one of the ways she felt drawn to God. “Whenever school or life became too much, I found myself drawn outside. There, under the star-filled sky, I was able to give God all of my worries and fears about where He was taking me.”

These worries and fears didn’t abate, but once she hit her junior year, Rachel started to think more seriously about being a student missionary. She told her parents and started looking for places she might want to go.

A Renewed Call to Mission

Soon it was her senior year, and she found herself back in the pew in PMC during fall semester Week of Prayer, listening to a speaker talk about student missions yet again. However, this time Rachel didn't push it away. She went to Campus Ministries to get the paperwork she needed to fill out for her application. Rachel later went through an interview with Tom Decker, principal at Hong Kong Adventist Academy (HKAA).

“After the interview, I was talking with friends, and I couldn't explain it, but Hong Kong felt right. For the first time in a really long time, it was not what I had originally wanted, but I was kind of OK with that,” she explains. “I asked God: ‘If you want me in Hong Kong, make it very plain to me. Close the doors that need to be closed and open the ones that need to be opened.’”

Three weeks after the interview and during spring Week of Prayer, three years to the day of her first call to student missions, Rachel received the second email from Decker. In it, he told her that he did indeed need a science teacher, and he offered her a second interview.

Rachel accepted the second interview, and she was eventually offered a position at HKAA.

“God moved so many mountains in my life to give me Hong Kong,” she explains. “When I accepted that I was going as God’s missionary, I had unknowingly accepted the job — I had accepted Hong Kong.”

A few weeks later, Rachel heard that her friend from Andrews also would be teaching at HKAA. It was an answer to her earlier prayer not to go alone. “I was going because God had said I was supposed to be there. I didn't have to worry about the little things because He had already gotten them done.”

Rachel graduated that May and moved to Hong Kong in August. It was her first time on a plane and her first time out of the U.S. She began teaching science for grades 6-7 and high school physics.

Challenges in the Mission Field

Shortly after she arrived, protests started to pick up in Hong Kong. The school closed for five days as people were protesting and closing down streets. “I learned to watch out for large crowds wearing masks or black,” Rachel explains.

Despite the chaos of the protests, Rachel clearly saw God leading in Hong Kong. One day in late August, the high school math teacher came to her, saying he was willing to donate leftover endowment funds so she could buy a telescope. She immediately began searching and found a telescope within the budget.

For Rachel, this ability to continue sharing her love for stars was yet another reminder of how God was moving mountains in her life. “In the end, I found myself with a dream I wouldn’t let myself dream (not even to God) because I thought it would never happen — bringing astronomy to high school students.”

In December, the protests started to calm down, but it was a short-lived peace. During Chinese New Year at the end of January, Hong Kong implemented a series of travel restrictions in response to COVID-19. Rachel's school moved to online learning, and, since then, they have finished almost an entire semester entirely online.

“This has been one eventful year. It started with me moving halfway around the world, only to find myself trying to navigate the intricacies of teaching students who had families on both sides of the protests. Just when the protests were calming down, we were hit with the coronavirus, and I had to learn how to teach online. But, in the end, I would not trade this experience for the world. It has taught me so much about who I am as a person, a teacher, and a servant of God,” Rachel explains.

During the 2020-2021 school year, Rachel will teach science for grades 7-8, religion for grade 6, and high school physics at HKAA. She is hoping to build a small astronomy program for the school, mentor one of the new teachers and help with an outdoor school event, a week where they take students out into nature and teach them important survival skills.

“My entire story is one of God’s leading,” she says. “Sometimes, I wonder why God has done so much to bring me here. Throughout this experience, I find myself thinking that perhaps the purpose behind this, or one of the many purposes, is for God to reveal how He has been writing a story for my life all along.”

The original version< /a> of this story was posted by the Lake Union Herald.