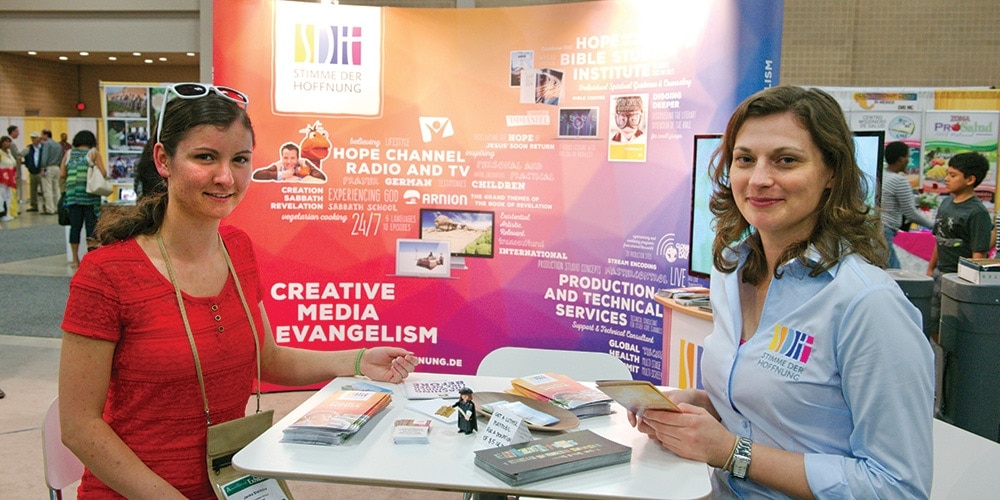 It doesn’t happen always—but it happened this time. Meeting Wolfgang Schick at the booth of the Stimme der Hoffnung (German for “Voice of Prophecy”) was the real deal. Schick is a young German professional and comes right to the point. He is assertive, yet very friendly and approachable. As the director for media services production and the media store, he is passionate about the ministry he is representing at the General Conference session. I felt inspired after my interview with him and with Klaus Popa, the CEO of Stimme der Hoffnung.

Stimme der Hoffnung is a media center of the Seventh-day Adventist Church in the Inter-European Division, located in Alsbach-Hähnlein, close to Frankfurt, Germany. It started radio braoadcasts in 1948 under challenging circumstances in post World War II Germany. “The radio programs generated such huge response that in the same year the International Bible Study Institute was established with the purpose of enabling listeners to learn more about the Bible,” Popa said. Almost 70 years later, Stimme der Hoffnung has become a modern media center encompasing many media activities, including radio, the International Bible Study Institute, a special media ministry for the visually impaired (from 1964), satellite evangelism and TV productions (from late 1980s), Web and app development, design work (since 2006), and the development of network and Web solutions that support division-wide and global evangelistic efforts.

Among other things, Stimme der Hoffnung provides technical know-how on quality 24-hour broadcasting. They created the official Church Web site, adventist.org, and are currently working to create a network of more than a dozen national Hope Channel Web sites.

Stimme der Hoffnung operations exploit synergies that empower the church as a body to do its work more effectively. Creating a coherent worldwide Hope Channel “brand” and a robust online platform that can be used all around the world is an expression of their vision.

Sharing faith effectively and engagingly and communicating the Three Angels’ Messages in contemporary culture in “a creative, innovative, culturally understandable, and relevant way” is high on the agenda of Stimme der Hoffnung, according to Popa.

This vision has kept Schick at the Stimme der Hoffnung for the last 13 years—even though, with a degree in computer engineering, he had many higher-paying job opportunities. However, the prospect of being able to “change the lives of people for the better” and the moving testimonies of people whose lives have been touched by the ministry have convinced Schick to stick around.

One of those testimonies is Friederike’s, a 50-year old woman who was raised in a traditional Protestant home in Cuxhaven in northern Germany. The reality of God in Friederike’s life was minimal.One day, she decided to get to know the Bible and became interested in better understanding the Ten Commandments. She was particularly intrigued by references to the “Sabbath.” When she googled the word “Sabbath,” the Hope Channel Web site popped up on her screen. After a while, she contacted the Stimme der Hoffnung team for further information and also found an Adventist church in her town. Friederike studied the Bible with the help of the Bible correspondence school, started going to church, and finally, got baptized.

Now she shares her new discoveries with the guests in her family-owned hotel and has started the project “Faith During Vacation,” inviting all her guests to experience God as she did.

The Stimme der Hoffnung team has more creative ideas in store. Following the success of the “faith.simple” initiative representing a new integrated media evangelism approach to public evangelism, the team has been working on “Arnion,” the Greek term for “Lamb,” a project that aims to present the main themes of Revelation in a contemporary manner.

Another project that Schick presents passionately is “Encounters.” This international project is a première for Stimme der Hoffnung and engages the biblical text using approaches aimed at talking to Millennials between 18 and 35 years of age. The pilot episode of the series can now be watched at www.EncountersTheSeries.com. The series focuses on personal discovery and practical application and favors an inductive approach over a more dogmatic approach.

My visit at the Stimme der Hoffnung booth was very refreshing. The concept of cooperation and synergies between the various branches and ministries of the church kept coming up and reminded me of a functioning body. Stimme der Hoffnung definitely wants to make this not just a concept but a visible reality.