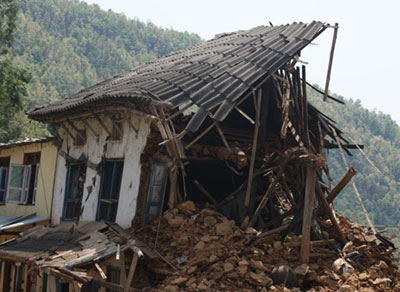 A candle for the world’s highest hills

Nestled in a country literally at the top of the world is a hospital whose goal is to treat each patient as if treating Jesus Himself. Scheer Memorial Hospital, located in Banepa, Nepal, is the only Seventh-day Adventist Church institution in Nepal. Started in the late 1950s by Dr. Stanley and Raylene Sturges, the hospital has today grown into a three-story facility licensed for 150 beds, providing a full range of outpatient and inpatient services. Beginning as a small clinic, the Sturges expanded the facility into a 20-bed hospital. Mr. Clifford Scheer, as a memorial to his parents, donated most of the money needed to build the rest of it. Scheer Memorial Hospital now specializes in orthopedics, obstetrics, gynecology, and pediatrics, with professional medical teams joining the staff periodically from America, Netherlands, Australia, and Japan.

In April, Nepal was struck by a serious 7.8 magnitude earthquake. The hospital, located just 16 miles (26 kilometers) from Kathmandu, experienced the brunt of the shaking but suffered minimal structural damage. As many villages were literally destroyed and had no access to emergency medical help of any kind, staff from Scheer jumped into action, sending a team to villages hours away to deliver food and materials for shelter, and to provide medical care.

Dale Molé, CEO of the hospital, is here at the session in their booth located at C1726. “We are hoping we can generate interest in the work in Nepal,” he says. “[Scheer] has been in Nepal since the 1950s, and there’s a lot more work to be done. That’s the primary focus—not just a ministry of works but a ministry of actions—that’s what it’s all about.”

Scheer Memorial Hospital has also partnered with Asian Aid, a Christian nonprofit organization that is helping with funding women’s health initiatives and children’s surgeries. In the aftermath of the devastating quake, Asian Aid raised more than $200,000 to help cover costs associated with the care and treatment of patients flooding the hospital with no ability to pay.

The hospital was able to provide more than four and half million rupees worth of care, “and for a charity hospital like ours, where the average patient visit costs about 40 cents, that’s really hard for us to provide that quantity of care. We need funds for more general operation. Most of the equipment there is very old and either broken or not working as it should. We need major capital investment to move the work forward,” says Molé.

To learn more about Scheer Memorial Hospital, be sure to visit their space in the exhibit hall at C1726 and online at http://scheermemhosp.org/.