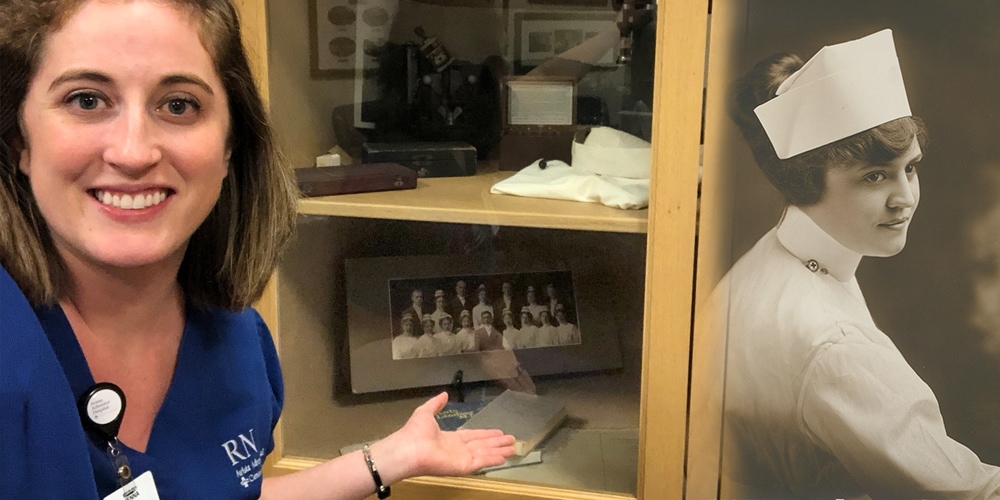 By: Heather Quintana and Adventist Review

Like the passing of a torch, one Seventh-day Adventist family has handed down the privilege and responsibility of working for the church’s healing ministry from generation to generation. That legacy spans four generations of health care workers and begins circa 1910 at a camp meeting in Denver, Colorado, United States.

Anna Mardian gathered several of her children and attended a series of evening meetings hosted by the Seventh-day Adventist Church. What she heard in that tent changed her life, and she was soon baptized into the Adventist faith. Anna’s decision would influence the course of her family for generations to come, beginning with her daughter Bernice.

Within the Adventist health system now known by the name AdventHealth, children in many families have followed in their parents’ footsteps, continuing the legacy of Extending the Healing Ministry of Christ in hospitals and care sites across the country.

A Nurse in a New World

Two of Anna Mardian’s daughters knew they wanted to pursue a vocation in medical missionary nursing. Bernice was the first to set out on this adventure. With a heart for helping others, she registered in the nurses’ training school at the Boulder-Colorado Sanitarium, one of the earliest extensions of the Battle Creek Sanitarium in Michigan, the first Adventist sanitarium, built in 1866. The Boulder, Colorado, facility was built in a cool mountain setting to help miners suffering from tuberculosis.

There, Bernice trained as a registered nurse and learned the principles of healthful living, such as the healing power of sunshine, water and fresh air. After graduating in 1923, Bernice did private-duty nursing and accepted an assignment that was an adventure far from home: she packed up and headed into the Wild West to take care of an elderly rancher with a broken hip. As it turned out, that rancher in Rock Springs, Wyoming, needed Bernice as a nurse, and with the passage of time, his son, Edmund Blair, wanted her as his wife.

Raising a Family of Faith

As Mardian and his wife continued their commitment to God and the church, three of their five children followed in his footsteps and chose a career in health care.

Today, Mardian’s daughter, Robyn Edgerton, works as director of mission strategy for AdventHealth, continuing the development of the CREATION Health program and expanding that whole-person lifestyle initiative in churches, schools, and hospitals. The word “CREATION” in CREATION Health is an acronym for Choice, Rest, Environment, Activity, Trust in God, Interpersonal Relations, Outlook and Nutrition. The initiative is a contemporary expression of the same message of biblically inspired healing that the Adventist Church has held since 1866.

The Torch Continues Its Journey

Just as the overall legacy of Adventist health care continues, so too does the Blair family’s generational legacy that began in the early 1900s in Boulder, Colorado. Today, Bernice’s great-granddaughter Jenna, also a registered nurse, works at Avista Adventist Hospital — almost 100 years after Bernice trained in Boulder-Colorado Sanitarium.

Jenna remembers the day she fully realized the connection of her work to her great-grandmother’s: “I was doing a CPR recertification in a boardroom where there were all of these artifacts from the Boulder Sanitarium,” she says. “It was so cool to look around and see these things that I know my great-grandma was a part of and could have touched.

“I feel connected to my great-grandma in the sense that I’m caring for patients similar to the ones she cared for,” Jenna continues. “I’m dealing with the same heartbreak and advocating for patients just as she did. I’m doing these things with newer scrubs and computer charting, but it’s the same work — bringing comfort and healing.”

A Legacy of Care

Thanks to the steadfast commitment of generations of Adventists such as the Blairs, organizations like AdventHealth have offered unique whole-person care for more than 150 years, now reaching almost 14 million people each year. With a total of five hospital systems in North America, nearly 100 hospitals, 140,000 employees, and nursing schools across the country, the Adventist Church’s legacy of health and wholeness lives on.