From Ebola to COVID-19, This Nurse Grad Has Seen It All 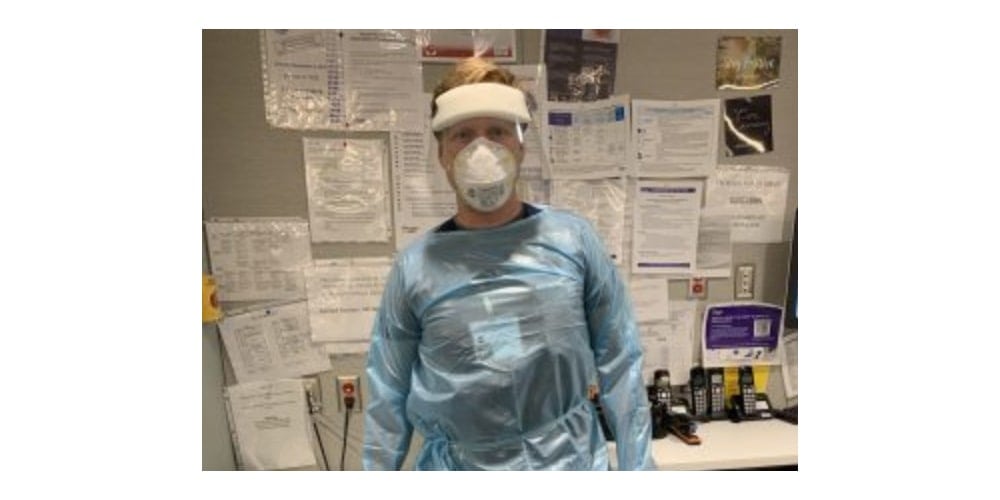 Stephen Scheffler calls himself a cautionary tale. Others think of him as an inspiration.

In the past few years, Scheffler, a graduate of the Union College nursing program in Lincoln, Nebraska, United States, has run into the disaster zone as often as he can. In 2015 he flew to Sierra Leone to care for Ebola patients on the front line, and in 2020 he moved to New York City to help fight the COVID-19 pandemic.

Learning to Run Toward Challenges

Life hasn’t been easy for Scheffler. After being raised by a single mother with very few resources, he was desperate to make a successful path for himself. He first arrived at Union College considering a degree in graphic design, then spent years in indecision, struggling to find the right career fit.

Between changing majors, taking time off to help family, pausing to earn money for tuition, and struggling academically, Scheffler took nine years to graduate, ultimately, with a nursing degree.

Through working with the Teaching Learning Center, a doctor diagnosed Scheffler with depression and anxiety. He felt relieved to better understand why he had trouble with focus but continued to struggle. He even failed a semester of nursing courses.

But everything he had already invested in college to that point drove Scheffler to continue. “I couldn’t give up!” he exclaimed.

A Community of Support

The teachers and staff in Union’s nursing program rallied to help Scheffler succeed. At one point, he couldn’t afford his medications, and the nursing professors helped pay for his prescriptions.

“The nursing program staff were a big part of helping me get through by really working with me,” Scheffler said. “They could have said, ‘We don’t want you here.’ But they didn’t.”

Scheffler said he wants to be clear: the nursing program would never pass students incapable of doing a great job. But in his case, they stuck with him as he slowly overcame his obstacles.

“I do feel like if it had been any other program, anywhere else, I wouldn’t have made it,” Scheffler said. “It scares me to think about that.”

After his long-awaited graduation in 2011, Scheffler passed his boards on the first try. (Union’s nursing program has posted the top first-time pass rate in the state consistently for many years.)

Scheffler worked in a variety of clinical settings in his first years on the job. But in 2014 a crisis caught his eye.

He opened up his browser and typed, “I’m a nurse. How can I help with Ebola?”

That query sent him to the USAID page, where he filled out applications and was soon referred to Partners in Health, a non-profit organization. After a few days of intense training, Scheffler flew to Sierra Leone for a nine-week stint on the front lines of the Ebola epidemic.

“It was tough,” Scheffler reflected. “There was a lot of death. It was kind of scary. It was a horrific way to die.”

But he calls the experience amazing. “I was able to help people and try to save some lives. I had the opportunity for nine weeks to work with some of the most courageous, compassionate people I’ve ever worked with in my whole life. It is something I can really be proud of. It feels great to be part of something like that.”

Scheffler believes that he was approved for service in Sierra Leone because of his experience treating patients in Nicaragua as part of his studies.

“They were only taking people with international experience,” he said. “I learned a lot about cultural sensitivity through Union’s Global Health Nursing class.”

Recently, Scheffler once again volunteered to serve in a danger zone. He left his stable job as a charge nurse in Loveland, Colorado, to take a temporary assignment at a hospital overrun with COVID-19 cases in New York City.

“There is a lot of fear and frustration, and people not knowing what is going on,” Scheffler said of the outbreak. “During our busiest time, I feel like a lot of nurses were scared. We didn’t have a lot of personal protective equipment. We still don’t. It’s very scary, because you don’t know who has COVID-19.”

His experience with COVID-positive patients has spanned the whole range. “Some recover, some seem perfectly fine,” Scheffler said. “Others died. And there are other patients who lived but who will never be the same.”

Scheffler tells the story of checking the neurological status of a previously healthy young man, with zero response. “His family no longer has him in their lives,” he said sadly. “We don’t know if he will ever be OK. You do your best, but you don’t know what will happen.”

Serving in the midst of a crisis and watching other people doubt the veracity of the illness has been discouraging for Scheffler. “Even from nurse to nurse, there are very different experiences. It blew my mind that from one area of the hospital to the next it is so different.”

He has seen the danger posed by COVID-19. “People dying alone in the hallway is real,” Scheffler attests. “Just not everybody is seeing it.”

A Duty to Respond

Some people might call him crazy for running into major crisis situations, but Scheffler said he doesn’t have to think twice. “If I’m able, I need to go. Some situations require a response if you have the capacity to respond. I feel like not going would be really bad.”

And he gives thanks to Union College for helping him build on his experience to develop an attitude of service.

“When I was at Union, they said, ‘If you answer the call and go, you’ll be given what it takes to handle the situation.’”