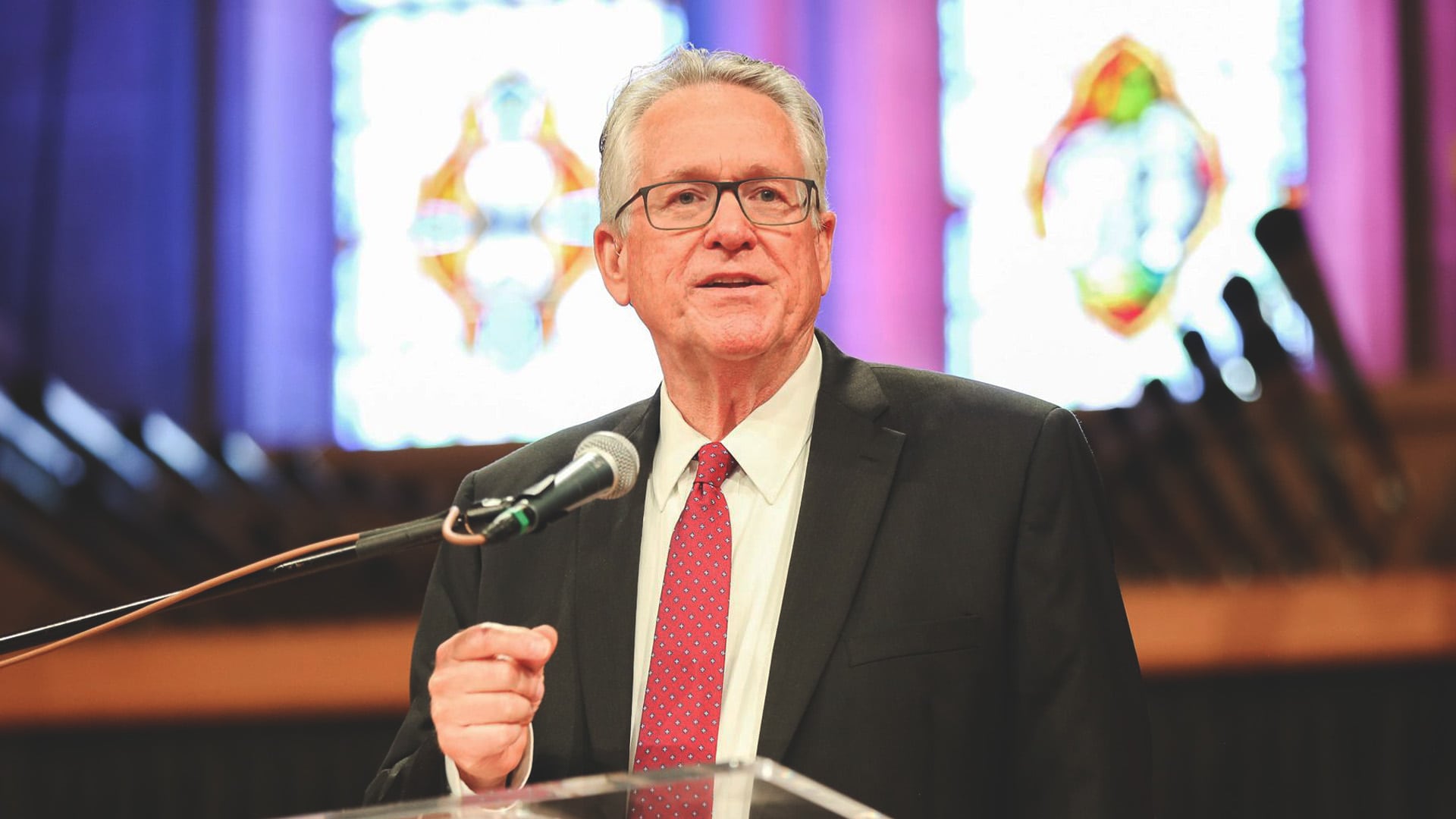 The Adventist Community Health Initiative, under the leadership of Randy Griffin, along with his wife, Kathy, has had a tremendous impact in the Lake Union Conference region of the Seventh-day Adventist Church over the past several years.

The ministry was paused because of the coronavirus pandemic, and at the Lake Union Constituency Session on May 15, union president Ken Denslow announced plans for a scaled-down version to return. He cited two principal reasons for scaling back: conducting a clinic almost every weekend was taking a toll on the Griffins; and the couple is now managing the Three Angels Store (formerly Indiana Adventist Book Center).

The video shown at the constituency session highlights the work of that important ministry over the past six years.

In the Words of the Leaders

Twenty-sixteen to 2020. During those five years, we look back. We witnessed how God has been moving. And as we scanned the headlines in the Lake Union Herald, we noticed that the pace of change has come more rapidly than any of us could’ve imagined. Twenty-twenty was undoubtedly one for the record books. We look back with humility and gratitude at an unchanging God who kept His promise to be with us at all times.

One ministry launched this quadrennium that has touched lives in profound ways — seen and unseen — is the Adventist Community Health Initiative. From 2016 to 2020 — right before the pandemic forced a pause — this ministry has served 12,000 people with medical services valued at US$4 million.

It’s fitting that this ministry of compassion was launched right here in the Lake Union, the birthplace of the health message. One of our church’s pioneers, Ellen White, on June 3, 1863, had a vision while in Otsego, Michigan, about basic health principles, one in which a healthy lifestyle provided “the best condition for the highest service to God and man.”

It was here too, on September 5, 1866, that Battle Creek Sanitarium opened its doors to patients, leading to the formation of the Adventist hospital system, one of the largest health-care providers in the United States today.

Almost 160 years since that vision, we find that Ellen White’s encouragement to keep the mind and body in a healthy condition is one which still rings true. We don’t have to look far to see signs of distress.

Current data paints a bleak picture as it relates to our health and wellness. For instance, in our union, the rate of obesity — a condition which leads to a multitude of sicknesses — trends higher than the national average: Illinois, 31 percent; Wisconsin, 32 percent; Michigan, 36 percent; Indiana, 37 percent.

As for dental care, according to the American Dental Association, about a quarter of the U.S. population goes without dental coverage as compared to medical benefits.

Griffin practiced dentistry in Indiana for 14 years, until Thanksgiving week of 2010, when he had a fateful fall.

Randy: I fell from a ladder and broke my wrist, had numbness sensation, where it would just not allow me to practice dentistry in a normal way anymore.

Two years later, he received a call from Lake Union youth director, Ron Whitehead, to manage the nighttime programming for the 2014 International Camporee in Oshkosh, Wisconsin.

Randy: They approached me and asked if I would be willing to look at and see if a health ministry in the Lake Union that would directly impact the immediate needs of people specifically with dental and vision care.

In February 2016, the Lansing Church became the staging ground for the first pop-up clinic. That year, Griffin ran 10 clinics, and in subsequent years an average of 18 to 20 across all five conferences in the Lake Union. Each venture was planned and executed with military precision, enlisting an army of volunteers working sacrificially to make it all happen.

Randy: Every clinic that we facilitate [we provide], the equipment for dentists to do fillings, cleanings, extractions, we provide vision equipment for eye doctors to perform an exam to help with reading and seeing more clearly.

But it is also the church or churches that come together that they may have somebody who is a chef. And all the way up to where we've had cardiologists, we've had nurses, eye doctors, dentists, health education people, [technicians doing] blood testing, so depending on what the church members are comfortable doing at that clinic, you could see a wide variety of things.

These partnerships were often across conferences, such as when in 2018 Michigan’s Lansing church and Lake Region’s Bethel church united to reach their community.

Gerard Mauze, Bethel church first elder: Just the planning was so exciting, just to work together, advertising, … and finally, the day of event, we were together, and we were there all day. It was a blessing to see people so grateful for what we did. It was really good to work together and after that, to follow up with those who attended the program.

An impact hard to miss.

Paul Wehrmeyer, Lansing church member: What would you do if you arrived at 5:00 a.m., two hours before the opening of an event in your church, and you saw 10 people waiting outside your building to see what you had to offer. Can you imagine a Black Friday-style event even being hosted at your church? And then by the time you opened the door, that number had quadrupled. In the first opening of those doors, 40 people from your community entered your church to see what you had to offer and to see who this Jesus is who inspired you to open your doors for them.

Doors were opened, too, in Marshfield, Wisconsin, where the clinic ignited an unprecedented level of cooperation across the state, well beyond dentists and other medical professionals.

Arlene Gayle, former Marshfield church health director: The other thing that was important for us was the involvement of the mayor. He was very excited; he pledged his support, and he invited us to participate in the weekly television and radio program. And I think the Lord softened his heart. Such a program of such magnitude providing for people in [his] community, that would be a shame if he didn’t support it.

Over near Peoria, Illinois, God showed up in an unexpected way at the makeshift clinic run by the Richland Bridge church. There at the local school, Jessica Reese was assisting dentist and lay pastor Rod Willey.

Rod Willey: I remember, and I looked up in the bleachers and saw this good-looking young man and three young kids and you said, ‘That’s my boyfriend and three kids.’

Jessica: Yes, they were right up there watching me work.

Devin: It was a humbling experience just to see someone I love and to actually be able to bring the children and see them seeing so many people being helped by those that took time out of their day to help someone else looking for this help for only God knows how long.

Willey knew that Devin and Jessica had been struggling in their relationship. So, there at the clinic, he asked Jessica a question.

Rod: I just wonder if Devin would like to have a mentor.

Devin: I think it was a beginning of my transformation. I was in a bad, dark place at that time, and I saw light there and thought to follow it.

God moved on Devin’s heart in a miraculous way, and before long he was participating in Bible studies. He and Jessica would tie the knot in fall 2021. And in January 2022, the entire family — mother, father, and three children — would profess their love for Christ through baptism, an emotional service conducted by the dentist who had offered to teach them about a God who can transform lives for good.

One of the largest clinics to date was held the summer of 2017. In a partnership with Adventist Medical Evangelism Network, also known as AMEN, thousands of uninsured and underinsured people flooded Detroit to receive free medical and dental care.

Patient: I got here at 4:30 this morning, and I came here for dental only. For me, that means a lot because they charge you so much for stuff these days and you can’t get up the money when you don’t have a job, and I don’t have the insurance, and to get here in time to pull these teeth [that were] giving me a lot of problems.

Making connections with volunteers serving as the hands and feet of Jesus.

As we take a retrospective look at the humble beginnings of the various ministries in the Lake Union, we see how God has led, reminding us that we have absolutely nothing to fear for the future.

God is still giving us creativity and vision to move forward. So, what does forward look like?

It means for the next four years we will prayerfully seek opportunities for the gospel to make inroads into our larger cities — mission to the cities of Detroit, Chicago, Indianapolis, Milwaukee, four cities with seventeen million residents — about half the population of our entire region.

Why are we doing this? They need hope too!

By the power of the Holy Spirit, we want to sound the clarion call of Christ’s soon return to our teeming metropolitan areas filled with people desperate to know someone cares about them — and that someone is you!

From the sacrificial spirit of our pioneering men and women, to members serving despite physical limitations, think of how you, too, can be a part of this great commission.

Together in mission, I Will Go!