On being insignificant in the universe—except to God 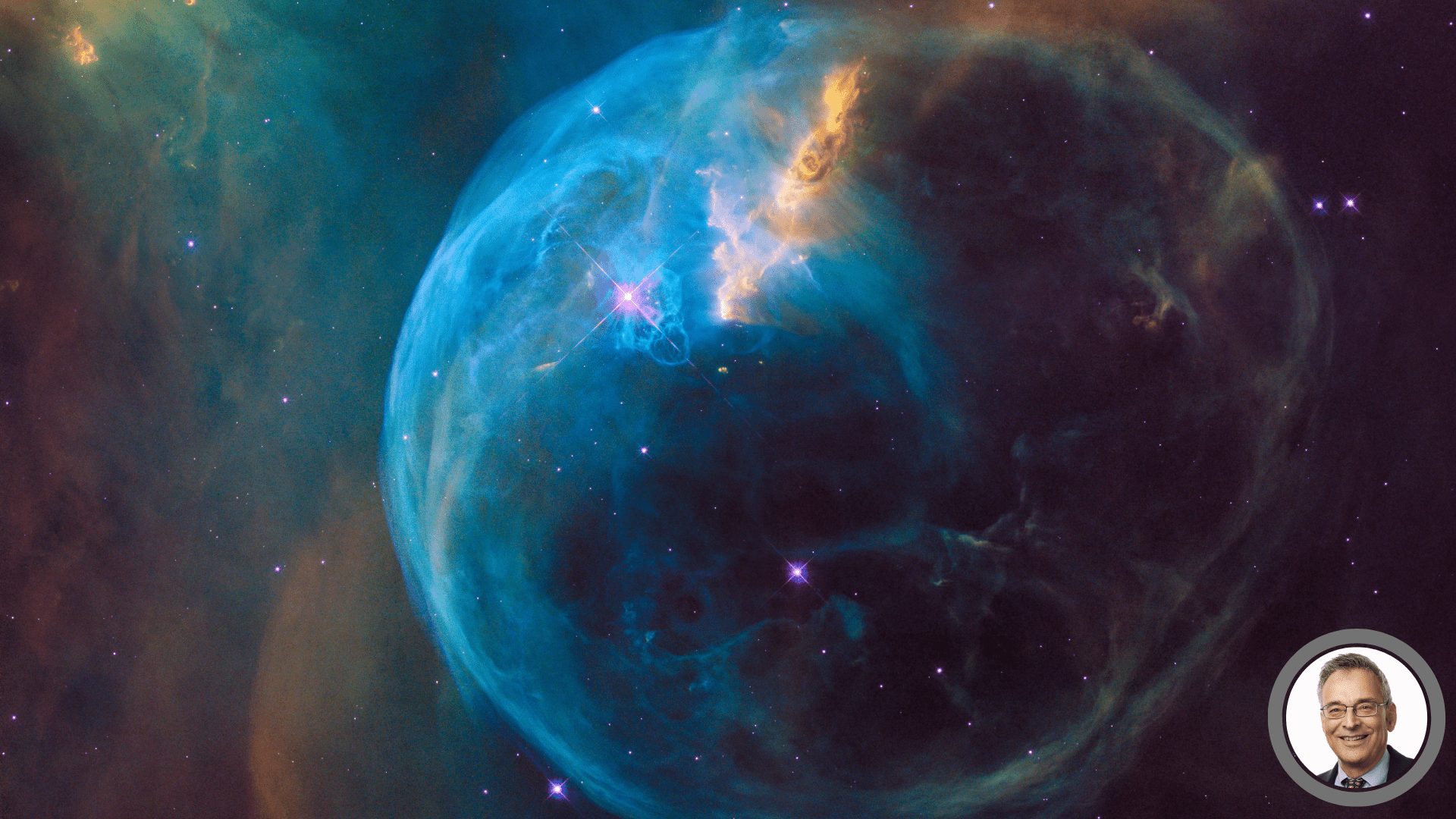 In the space before me, an app (Atomic Clock) measures the moment in 1/100th of a second, so quickly that the numbers quiver and flash into unreadability (you try counting 99 numbers a second). That’s how swiftly the moment sweeps us along with it or, perhaps, how swiftly the moment leaves us behind (kind of like what time does to us when we die).  In principle, we can slow down the moment relative to others, even stop it (travel close to the speed of light, or enter a black hole); in reality, we’re finite and temporal beings helplessly trapped in space and time and barely able to understand our own finitude and temporality, much less the eternity and infinity that they’re nestled in.

For Isaac Newton, time and space, absolute and immutable, contained the stuff of the universe, like a glass aquarium does water and fish. For Albert Einstein, space and time merged into spacetime, itself part and parcel of the stuff of the universe, and which itself curves and bends in response to that stuff, as skin does to our body. The most dramatic manifestation of that bending and curving is gravity.

Some argue that space is nothing but the relationship between objects. Yet space—it ripples, curves, bends, even expands (so it’s not nothing). Our universe and the galaxies in it (we’re told) are expanding; think of a loaf of raisin bread rising.  However, if expanding, then the universe is not infinite (How can what’s infinite get bigger?)  But, if not infinite, what’s beyond the universe? And, if I may humbly ask—What’s it expanding into?

And the distances? If light (which moves at 186,000 miles per second) travels more than 112 billion miles in a week, how do we envision the edge of our observable universe—93 billion light-years wide, and expanding (again, into what?)? We, as beings who take up about 1.76 cubic feet—we don’t have enough neurons, neurotransmitters, and synaptic connections to conceive of that much space. Our imaginations shrivel before the idea. Our brains are just too small.

And the other way? According to quantum theory, the smallest distance of measurable space is a Planck Length, 1.6 x 10-35 meters.  “To give you an idea, think of the tunnel of the Large Hadron Collider. It’s a ring with a diameter of about 10 kilometers. The Planck length compares to the diameter of a proton as the radius of a proton to the diameter of the Large Hadron Collider.” We have too many neurons, neurotransmitters, and synaptic connections for our minds to think that small. Our brains are just too big.

Also, the vacuum of space isn’t vacuous but teems and seethes and fluctuates, producing matter and anti-matter, with particles popping in and out of existence. It contains the Higgs Field, responsible for giving matter its mass, and is soaked through (they think) with dark energy, which (they think) causes the universe to expand at the rate it does (again, into what?).  And scattered hydrogen atoms populate every cubic meter.

And time? Though we understand a lot about time in the context of Einstein’s theory of relativity, it is, wrote Richard Mueller, “remarkable that we understand so little about the fundamentals of time—what it is and how it relates to reality.”

What is time? What does it do, and how does it do it? (A watch, no matter how precise, no more explains time than a speedometer explains speed or a thermometer heat.)

Why does time flow (or does it stand still and we, in space, move through it?) in one direction only, from past, to present, to future? Time must be extraordinarily powerful because, whether in Tasmania or Paris, it instantly converts the momentary now into the non-existent past.  And, simultaneously, it pulls the non-existent future into the momentary now before turning it, too, into the non-existent past. All that is, it seems, is the now, this “enigmatic and ephemeral moment that changes its meaning every instant” and which, again, either sweeps us along with it or leaves us behind.

Or maybe neither?  Scientists theorize about the “block universe,” which teaches that all space and time exist simultaneously, and that the flow of time—the past, to the present, to the future—is an illusion.  "Imagine a regular chunk of cement," says Marina Cortês, a cosmologist from the Royal Observatory in Edinburgh. "It has three dimensions but we live in four dimensions: the three spatial dimensions plus one time dimension. A block universe is a four-dimensional block, but instead of [being made of cement, it is made of] spacetime. And all of the space and time of the Universe are there in that block." Just as our being in one part of space does not negate the existence of other parts, our being in one instant of time doesn’t negate the existence of other instants, i.e., the past and the present—even if we experience only the present.  This theory might explain how God, outside of space and time, seeing the entire block universe before Him, knows not just the past but the future as well.

Also, just as the extremes of space—from a Planck Length to infinity—boggle our brain, the extremes of time do as well.  How do we grasp the smallest known measurement of time, a Planck Time, which is how long it takes light (186,000 miles per second) to travel one Planck Length (a hundredth of a millionth of a trillionth of the diameter of a proton)? Yet that’s easy compared to the other extreme: infinity.  Hovering between both, we grasp neither.

Though in God “we live and move and have our being” (Acts 17:28), we do so in space and time as well. Maybe they’re so difficult to understand because they’re so basic and foundational to thinking in general (try conceptualizing anything physical apart from space and time).  Perhaps space and time are things that, according to Thomas Nagel, “can’t be explained because they have to enter into every explanation”?

Space is so big, we are so small; time is so long, we are so fleeting (of “yesterday” for sure and, eventually, not of “tomorrow”).  Even with our atom-smashers, which take us in one direction, and with our satellite-based telescopes, which take us in the other, we know almost nothing, and much of what we do know will, when God will “bring to light the hidden things of darkness” (1 Corinthians 4:5), turn out to be wrong, anyway.

If the beauty, the vastness (in either direction), and the complexity of the physical world humble me, how much more so does the God who not only created it but who also “upholds the universe by the word of his power” (Hebrews 1:3, ESV),  and “in whose hand is the life of every living thing,/ And the breath of all mankind” (Job 12:10)? Even more astonishing, the same One who upholds it all, and in whose hand is our breath, also “made Himself of no reputation, taking the form of a bondservant, and coming in the likeness of men. And being found in appearance as a man, He humbled Himself and became obedient to the point of death, even the death of the cross” (Philippians 2:7, 8).

Clifford Goldstein is the editor the Adult Bible Study Guides at the General Conference of Seventh-day Adventists, and a longtime columnist for Adventist Review.