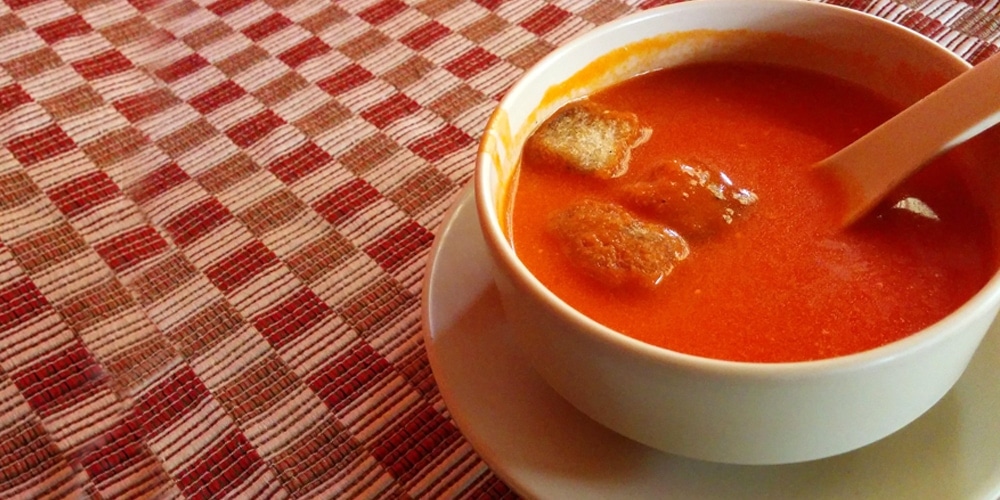 On the business news I recently heard something that connected the extra-busy COVID-kitchen to the economy. The report revealed some unusual trends in what grocery retailers are ordering from their suppliers. There has been a sudden spike in orders of comfort foods produced by well-known name brands such as Campbell’s soups.

Campbell’s standards, like vegetable soup, have been go-tos for decades. And now, in the midst of a national emergency, something long established and warm in the tummy seems reassuring.

When there’s so much to worry about, there’s an instinctive attraction to comfort foods that have been trusted for generations.

That news bite got me thinking of a parallel to how people feel about those of us who are part of faith-based organizations. The church is an institution with a name and a reputation. When disasters hit, people instinctively gravitate toward the friends and places that have seemed safe, trustworthy, or comforting in the past.

Depending on what happens, and how it gets covered in media, public perception of religion is constantly shifting. For better or worse, Christians and the culture in which they exist are constantly evolving into the team members that will be playing the big game in the ninth inning of earth’s history. When people are placing their faith orders with the heavenly Supplier, there will be a natural tendency for people to want something they already know and trust.

Even secular people may feel more open to any brand of religion if they know someone from that faith and have found them to be kind, honest, and helpful. They may not get all the fine points of their theology, but there’s something memorable and comforting about people who care for others and aren’t judgmental.

The church has been commissioned with an important message for the global stage, and none of that has to be edited out. But orders for our product are likely to go up if we’re trusted and known for being a dependable source of comfort, help, and love among the people we know and workwith day after day, year after year.

What Do They Know?

I’ve been thinking about this a lot. How can my church be the presence and the players that will be known for unselfishly serving people who live near our building? How can I treat my neighbors in ways that will make them more open to Jesus?

I don’t have all the answers. I’m still praying, trying to understand, be helpful, and care for the people in my circle.

Two of those people are a homeless couple that our church has been giving shelter to for nearly two years. You wouldn’t call them classic church-goers; they both have lots of tattoos. He’s a black belt ju-jitsu trainer and a mixed martial arts fighter with one ear that got cauliflowered in a fight. She has been with this guy since about a year after she separated from her second husband. Tattooed on her wrist are the words, “You’re dying.” Her other wrist says, “Stay awake.”

When she first met one of our church members at a yard sale, she wasn’t so sure about the existence of God. After a few contacts in which we helped her, she texted me, “I think there must be a God after all. I don’t know how else to explain how you and Maria (the woman who brought her to our church) came into my life.”

Over the 20 months that we’ve been helping this couple, they’ve quarreled, separated, and reconciled with each other about a dozen times. After one of those separations, I listened to him pour out his frustration as we sat in the church fellowship hall. After he had released about an hour’s worth of pain and the intensity was subsiding, I suggested, “How about if I read something from the Bible?” He agreed.

I opened to one of the psalms. This was pretty foreign territory to him, but I read and explained things as we went along.

I gradually felt a change in his mood. Tension was being released, and his pain was being replaced by something lighter and hopeful. He was filling his tank with the water of life. We prayed together. I think we both felt the presence of something unseen but very tangible. I think he felt that God had joined us in a time of pain and darkness with something like comfort and a kind of love that reached him. It was one of those moments you don’t want to end.

When the prayer was over, there was a totally different atmosphere in the room; we could feel the presence of Someone we couldn’t see. After a short silence, he said, “Pastor, I wish I could feel like this all the time.”

Of course, I wish he could too. And if he would bring himself to where spiritual connections are made, I think he could feel that way more often. But those are decisions I can only encourage and foster; I have to leave them to him.

A Choice to Make

After a recent supper with her, our conversation ran from poetry to prophecy. She read me some Haiku that was meaningful to her, and also veryhopeless. They essentially said:

Then something stops your breathing.

Enjoy what you can.

I spoke to her about my hope and understanding of the unseen world and the purpose of life. I explained the signs that point to the return of Jesus, the New Jerusalem, righteousness by faith, the character of God, wholistic health.

Since she’s a registered nurse, I tried an illustration from her field: “You’re a medical provider. You offer treatments to patients. You treat them to the best of your ability. It often improves their outcomes. But they have to agree, then cooperate. That’s how God is. He provided for our salvation. We choose to accept or ignore it. It’s our choice. If we accept Hisguidance, we’ll recover. If not, we won’t.”

It was no prepared speech; I was just winging it. But she listened and seemed to take it in. Before she left, we prayed together. She can do that quite naturally now, which is a lot of progress from a year and a half ago. I think she believes in God and considers herself a Christian; although the last time I suggested she consider asking God into her life, she wasn’t quite ready.

I don’t know what choices these two will make in the future. But I’ve tried to help them through some of the pain and tight spots of life. In the process, I’ve had many opportunities to read the Bible to them, pray with them, and explain the hope that keeps me going.

This whole journey has helped clarify the significance of Isaiah’s prophecy, which Jesus read one Sabbath morning in Nazareth. “The Spirit of the Lord is on me, because he has anointed me to proclaim the good news to the poor. He has sent me to proclaim freedom for the prisoners and recovery of sight for the blind, to set the oppressed free, to proclaim the year of the Lord’s favor” (Luke 4:18, 19, NIV)*.

I understand a little better how helping people in need, and serving a little comfort food, can provide opportunities to share the gospel in ways people can experience as good news and see as a window of hope.

Ross Calkins is pastor of the Bellflower-Lakewood Seventh-day Adventist Church in Southern California.