Ellen White never originated a doctrine or teaching of the church. 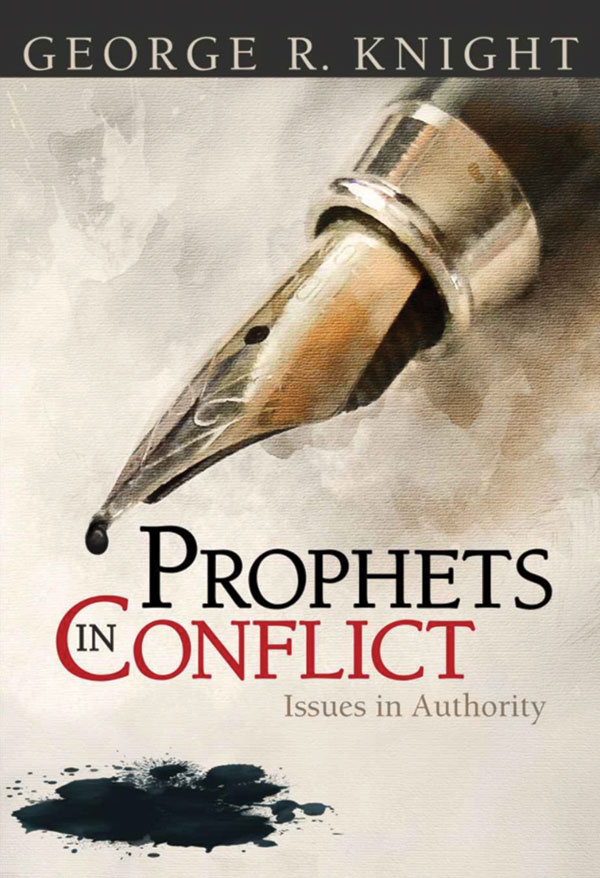 Prophets in Conflict: Issues in Authority

George Knight, professor emeritus of church history at Andrews University, with more than 30 books, 70 book chapters and entries in reference works, and 150 articles in journals and magazines to his name, is considered one of the most prolific authors in the history of the Seventh-day Adventist Church.

Except for chapter 10, the present volume is a compilation of articles and scholarly papers on the topic of Ellen White and her authority that he wrote during the past 40 years. As noted in his introduction, Knight has already published six books on Ellen White.
Prophets in Conflict, he says, is his final major contribution to Ellen White studies. The book has 14 chapters with endnotes and an index.

A recurrent expression in this book is the phrase “the Mormon Temptation,” the topic of the first two chapters. Knight compares Ellen White’s position, who said, “We want Bible evidence for every point we advance” (p. 9), with Joseph Smith’s claim that he was “called to the prophetic office to correct the biblical record and restore those parts of it that had been lost” (p. 17). Thus, the Mormon canon consists not only of the Old Testament and New Testament, but also of the
Book of Mormon, the Pearl of Great Price, and the Doctrine and Covenants. The first two supply supposedly lost parts of the biblical record; the last one consists of prophetic revelations of a doctrinal nature. Hence, the Mormon Temptation for Adventists is to view Ellen White’s writings the same as Scripture, as a divine, infallible commentary on Scripture (p. 38), which is a misuse of her writings.

Chapters 3 through 8 deal with the framework for understanding Ellen White’s prophetic authority. These chapters discuss the purpose of her writings, her major themes, the myth of the inflexible prophet, principles for understanding Ellen White’s writings, the issue of Ellen White and change as she received more light, and the case of her overlooked postscript in one of W. C. White’s letters to S. N. Haskell, who believed in verbal inspiration.

Chapters 9 and 10 address the issue of compilations. Knight supports compilations—after all, Ellen White’s will explicitly charged White Estate trustees with making them—but takes issue with unauthorized compilations and the headings in several authorized ones. He is especially critical of the heading “Took Sinless Human Nature” in the compilation of Ellen White quotes on the nature of Christ in the book
Questions on Doctrine, even though at least in one quote she clearly stated: “We should have no misgivings in regard to the perfect sinlessness of the human nature of Christ.”1 Chapter 11, “A Wrongheaded Journey: The Search for the Human Nature of Christ,” and chapter 12, “A Fruitful Journey: The Search for Proper Education,” deal with the proper and improper uses of Ellen White. The penultimate chapter focuses on prophetic authority, followed by Knight’s closing thoughts.

One statement in the book is puzzling: Knight seems to deny that Ellen White had doctrinal authority. She has prophetic authority (p. 49), and even divine authority (p. 54), but not doctrinal authority. The difference between these categories is unclear. The author is concerned that “some Adventists have placed Ellen White in the role of Joseph Smith and given her doctrinal authority” (p. 26). He writes: “She is neither a determiner of doctrine nor the final word on the meaning of Scripture” (p. 42). She is certainly not the final word on the meaning of Scripture, but she did play an important role in the formation of our doctrines.

The word “doctrine” from the Latin
docere, “to teach,” means “teaching.” In English it also has the meaning of a set of beliefs held and taught by the church. Ellen White never originated a doctrine or teaching of the church. This seems to be the meaning Knight has in view when he denies her doctrinal authority. However, when in the Sabbath conferences in the late 1840s the believers “came to the point in their study when they said, ‘We can do nothing more,’ the Spirit of the Lord would come upon me, I would be taken off in vision, and a clear explanation of the passages we had been studying would be given me, with instruction as to how we were to labor and teach effectively.”2 Here the Holy Spirit empowered her to determine which of the various views were correct. This is clearly a display of doctrinal or teaching authority.

The same is true in connection with the crisis over the book
The Living Temple and its pantheistic ideas presented at the General Conference Session in 1903. After a long discussion, General Conference president A. G. Daniells concluded the session, but he did not call for a vote. When he returned home, he found a letter from Ellen White in which she counseled him, “Be careful how you sustain the sentiments of this book regarding the personality of God. As the Lord presents matters to me, these sentiments do not bear the endorsement of God.”3 Her letter was crucial in saving the church from pantheism.

The problem with Knight’s position that she has no teaching authority is twofold. First, it is unbiblical. Scripture makes no distinction between a prophet’s pastoral and dogmatic function. When faced with this distinction, former Andrews University professor Raoul Dederen used to say, “I am happy to accept this, if you can prove it to me from Scripture.” Second, it leads to rejecting much that she has written on our doctrines. This was the position Desmond Ford took when he rejected the investigative judgment.

Nevertheless, the book contains much useful information for anyone interested in the prophetic ministry of Ellen White.