Faith That Matters & Reflections on Organization 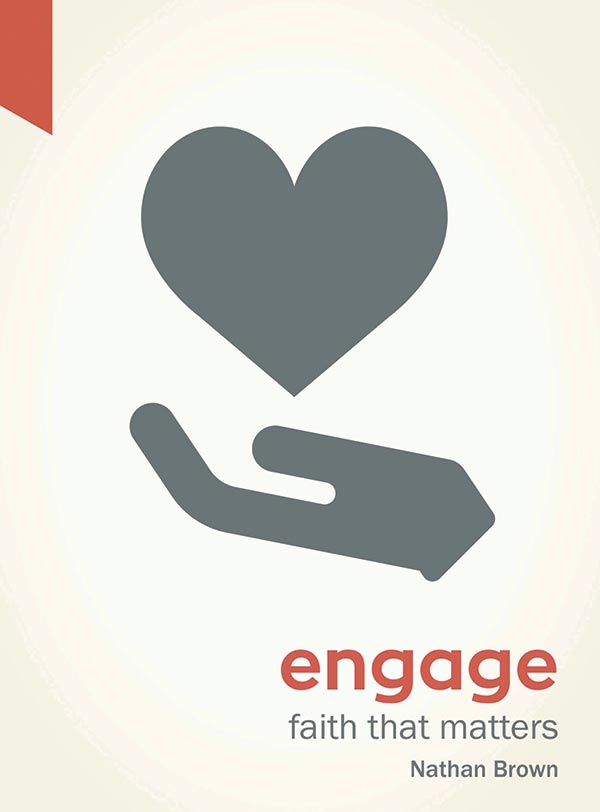 Here at Adventist Review we’ve had the good fortune to have hosted many talented writers over the years as interns, some of whom still appear in our pages as columnists. Nathan Brown, while not technically an intern, did spend a summer in one of our cubicles as he pursued a graduate degree in literature several years ago.

A talented writer and editor, Brown excels in being able to observe social conditions perceptively and connect them to spiritual principles revealed in the Bible. His book Engage is Nathan Brown at his most perceptive.

The book’s 38 chapters began as columns on the Adventist World website. Consequently, they’re short (fewer than 1,000 words), self-contained, and varied, touching on a wide variety of topics. It’s the kind of book one could well leave on a kitchen table or a nightstand, where it could easily serve as a quick shot of inspiration before heading out for the day or as a meditation before going to sleep at night. In any case, readers will find much that stimulates thought and reflection and, one would hope, Christian action.

This is more than a book full of warm, fuzzy thoughts (although there are some). It’s about the intersection of faith and practice: what does it mean to be a follower of Christ in a world in which Christians are too often as culpable as non-Christians in some of the scandals that rock society?

Brown’s strength is in mining the Bible for counsel that informs today’s conversations, and not just those inside the church. A few of the chapter titles reveal something of his unique perspectives: “Reclaiming ‘Radical,’” “Of Waiting and Discontinuity,” “The Missing Chapter on Revival,” “Racism Is Atheism,” “In Praise of Empty Churches,” “A ‘Boring’ Way to Change the World.”

Many Adventist writers turn out good material that other Adventists find uplifting and inspirational. Brown offers his readers a window on the world, in which he challenges Adventists to take their faith to a public in which many within and outside the church are dying slow deaths of loneliness, despair, lack of purpose, and meaninglessness.

The author’s solution is to take another look at the timeless truths of the Bible. The Bible’s prophetic voice, whether interpreting Daniel or Leviticus, speaks pointedly to the issues we face today. Engage helps us hear and handle those issues. It’s not unlike the promise “Whether you turn to the right or the left, your ears will hear a voice behind you saying, ‘This is the way; walk in it’” (Isa. 30:21). The book Lessons From Battle Creek contains papers prepared for and presented when church leaders, academics, and historians met in Battle Creek in 2013 for the 150th anniversary of the movement’s founding in 1863. The book contains accounts of the church’s early pioneers, the challenges they faced, and the issues they had to resolve as the movement grew and developed—issues such as race, mission, authority, and spiritual complacency. The chapters, heavily sourced and well written, are rarely boring. The individuals described, and their growth as leaders, seem as contemporary as today’s news accounts in Adventist Review.

Stories about such pioneers as James and Ellen White, Uriah Smith, and Joseph Bates will be familiar. But the chapters in this book go way beyond stories told in denominational Bible classes at Adventist schools. Many of the stories are about people who are likely unfamiliar to the general Adventist population. And that’s unfortunate.

The degree to which the Adventist movement has been successful is in direct proportion to the number of supporting players, many of them nearly anonymous, who defied stereotypes and used their talents as missionaries, authors, teachers, and leaders. Their stories are just as valuable as those of the pioneers who founded this movement, because their contributions are so much part of today’s legacy.

The authors of the chapters read as a Who’s Who of Adventist leaders and writers of the early twenty-first century: Delbert W. Baker, Merlin D. Burt, Bill Knott, James R. Nix, Barry D. Oliver, Ella S. Simmons, and David J. B. Trim. A transcript of Ted N. C. Wilson’s Sabbath sermon delivered that weekend, in addition to his closing remarks, rounds out the book’s contents.

Not everything about the Adventist movement’s founding and early development is contained in this volume. It’s a snapshot, not an encyclopedia. But it’s easy to see how characteristics of those early days are still part of our Adventist identity.

One caveat: don’t be put off by the book’s cover. A 1902 photo of the Battle Creek Sanitarium engulfed in flames, along with the words “Lessons From Battle Creek,” seems an odd way to celebrate the progress of a movement now nearly 157 years old. The chapters inside, and the stories they contain, speak not of guilt and regret, but of hope and vision.