The why, what, and how of community service & animal nature documentary. 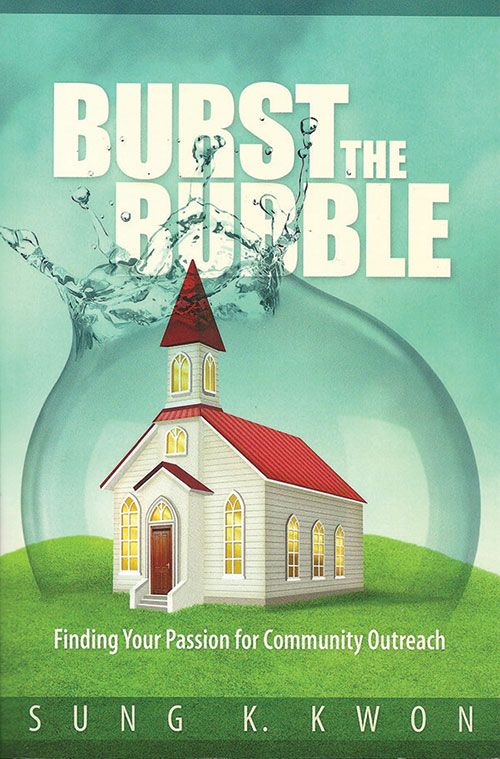 It’s sometimes useful to ask ourselves questions regarding our identity and purpose as a church. For example, if something happened so that our churches were locked or otherwise removed from our communities, would they be missed? That’s the question asked by Sung Kwon, executive director of Adventist Community Services for the North American Division, in his book Burst the Bubble.

The premise of the book is that there is more to our role as responsible community members than faithfully showing up in the aftermath of natural disasters. Adventists can, and should, do more to be visible in our communities on a regular basis through greater community engagement in the form of carefully devised service activities.

The book’s six chapters are presented in three sections: Why, What, How.

The first section—Why Do We Do What We Do?—covers familiar territory by reminding readers that Jesus’ ministry was incarnational: He became a man and served humanity. Serving others was how He demonstrated God’s love.

The second section—What Are the Components to Revisit and Reframe?—encourages readers to remember why the church exists and what is its mission. Too many Christians seem content with simply taking up space. On that perspective the author observes: “We must overcome institutional myopia and cultural differences and see the world as the setting for our calling, commission, and commandments as Seventh-day Adventists.”

The third section—How Do We Change Our Way of Thinking and Doing?—challenges readers to evaluate their congregations’ outreach methods to see if they are still compatible with a rapidly changing society; and if not, how they can be refined to be more effective. The success of this activity, according to the author, requires that as many members be involved as possible, not just as participants but as decision-makers.

Burst the Bubble is not light material. It reads more like a classroom textbook than a devotional book about witnessing. It covers substantial topics that require deliberate, disciplined reading. To rush through it would defeat the purpose of crafting a community service model that creates buy-in from members and has a positive impact on the community. Yet the author’s writing style is accessible (reflecting his personality).

The rewards of reading books such as this may include following more closely the One who mingled with people, ministered to their needs, won their confidence, then said “Follow Me.”

Pura Vida (Pure Life) bills itself as a film about second chances. It’s based on the video series Animal Encounters, two seasons of which appear on ARtvnow.com.

This movie-length feature traces the adventures of Gabi Pratz (from Germany), Cássila Carvalho (from Brazil), and Carolina Trisia (from Argentina/Mexico) as they visit several sites in Costa Rica. The purpose of their journey is to chronicle some of the rich variety of flora and fauna found in that country, to highlight the vibrant colors and exceptional diversity of the creatures they encounter, and to point out some of the dangers of human influences on the ecosystems those creatures call home.

The film is divided into 10 sections, correlating to the 10 days the trio spent on their journey. In the process viewers are taken to sanctuaries where moths, butterflies, frogs, toucans, monkeys, and dogs (yes, dogs) are protected and nurtured. Nearly every encounter reveals something about how either the animals or their environments have been harmed or threatened.

It also contains images of how, in some of these sanctuaries, some of the damage is undone: as when a toucan’s bill is repaired with a plastic prosthetic; or when monkeys, formerly held captive in horrendous conditions, are given food and shelter long denied.

Throughout the film the three travelers are filmed reflecting on the sites and sensations they experience. Their reflections often cite the creativity and genius behind what they experience, as well as the love of God that inspired it.

The photography is almost uniformly beautiful. However very little commentary is offered about the creatures pictured. Viewers are shown how adorable they are, but that are often uninformed about their names and individual habits or creature traits such as their diet, age span, or habitat.

A similar missing feature relates to the identity of the three travelers themselves. While viewers are given their names and countries of origin, nothing more about them is mentioned. Are they professionals? If so, what is their specialty? When they speak, are they speaking as lay travelers, or as the voice of experts?

Pura Vida is a visual treat for a Friday evening or Sabbath afternoon viewing, as well as a basis for meaningful reflection about life. It reminds us that humanity’s effect on nature is real and can either reflect or impair the image of God in nature’s beauty. Thanks to Pura Vida we may consider nature’s charms and challenges without ever having to travel to Costa Rica.

Pura Vida is available for iOS and Android operating systems, and on Amazon Fire, Apple TV, Roku, and at ARtvnow.com.

closer-look
With What Lenses Do We See?
It is not uncommon for a reader to read through the lenses of their own culture.
closer-look
The Final Hope
Best-selling author Clifford Goldstein has written another book for friends...
News
Free Medical Care: ‘United We Serve’
Thousands receive free medical care at Pathway to Health Indianapolis.