A new edition & boats in the south seas. 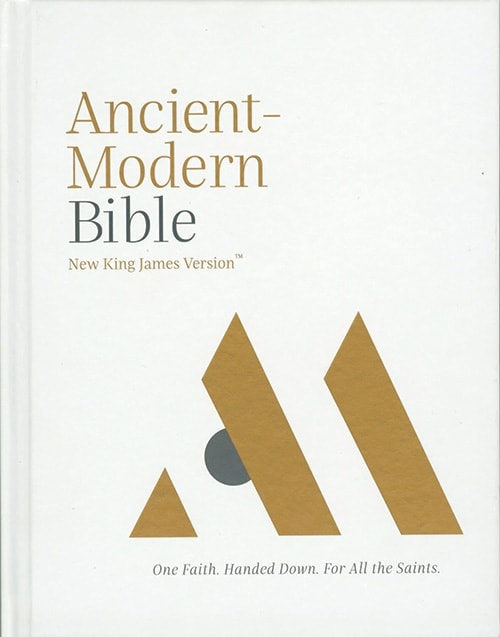 A New Edition of the Old, Old Story

The premise of the Ancient-Modern Bible, published by Thomas Nelson is intriguing: publish a study Bible and include commentary from various notable Christians from every age, from Augustine to N. T. Wright, from Justin Martyr to John Wesley.

This is not a study Bible per se. Not every page has commentary, and the commentaries that do appear are quite general; there is no attempt to provide word by word, not even verse by verse, explanations of the Bible passages cited. But the book does offer brief commentaries that allow readers to see the biblical material from the viewpoint of Bible students both ancient and modern. Each book of the Bible is preceded by a summary of that particular book, identifying who wrote it, when and under what circumstances, and its major themes.

An index lists all the commentators, and the sources from which their comments are taken. What the book does not have, and probably should, is a systematic way of finding some of the biographies of the more than 175 commentators cited (only a few biographies are included). Having a device nearby to google the names is practically essential to discover who they were, when they lived, and their unique contributions to the interpretation of the Bible. Not all the commentators are historical. Frederick Buechner, Jimmy Carter, John Maxwell, Eugene Peterson, and Warren Wiersbe occupy space with Venerable Bede, Eusebius of Caesarea, and Gregory of Nazianzus.

The Ancient-Modern Bible, like any good study Bible, has maps of the ancient world from both Old and New Testament times. There is also a section of 15 artworks—ancient and modern—that reflect the contributions of Christian artists down through the centuries. Supplemental articles address such issues as “Creation and Fall,” “Meditating on His Word,” “The Church,” “Salvation and Union With Christ,” “The Trinity,” and “What the Whole World Is Waiting For.”

The Ancient-Modern Bible joins a long list of study Bibles already on the market. What this Bible offers that most of the others don’t is the reality that Christians have read, studied, and tried to understand the Bible for centuries. Reading their words—alongside the words of Scripture—is a reminder that we are among millions of believers who have tried to honor Christ by being faithful to His Word.

Mission Stories From the South Seas

Comprehensive” is perhaps the best word to describe the book Captain Jack Radley and the Heyday of the Fleet. Author Rose-Marie Radley, one of Captain Radley’s daughters, provides an extensive and well-documented history of Adventist mission activity in the South Pacific as told from the perspective of those who staffed the mission boats and launches.

Beginning in the late nineteenth century, through the twentieth century, and still today, many places in Fiji, the Solomon Islands, French Polynesia, American Samoa, Papua New Guinea, and Vanuatu are accessible only by boat. This book provides many stories and photographs about those early pioneers and their missionary exploits.

The author is also a researcher and compiler: along with her own narratives, she includes the record of local conference and union conference actions that enabled these missionary endeavors. Also included are reports published by church administrators and missionaries themselves that have appeared in denominational publications over the years, recording the progress of those efforts.

The one theme that predominates, and with which the author is most familiar, is the role that her father, Jack Radley, played in the development of Adventist mission boats. His name is probably unfamiliar to most readers outside the South Pacific, but his story is remarkable in its depiction of missionary activities of 50 to 100 years ago as an endeavor from which you might not return. It chronicles the sacrifices that mission personnel made to visit native populations on primitive islands, their encounters with tropical diseases, as well as their experiences with enemy forces during World War II.

The one quibble about the book may be that it includes too much information. Several lists of mission boats include their names, the years they entered service, their dimensions, and notes about their service. But the lists are easily skimmed over by casual readers, and their presence is a worthy addition for a book likely to become the definitive history of Adventist mission ships in the South Pacific.

closer-look
With What Lenses Do We See?
It is not uncommon for a reader to read through the lenses of their own culture.
closer-look
The Final Hope
Best-selling author Clifford Goldstein has written another book for friends...
News
Inter-American Division Is 100 Years Old
At celebration, leaders and members reflect on God’s providence, recommit to mission.