Who hasn’t felt a row of musical notes, a snippet of lyrics, or a breath of melody hurl you through space and time quickly enough to unthread the laws of physics? A tune floating from a car radio, a store loudspeaker thumping out oldie beats between aisles of wares—and images (a high school party? a summer love?) swell up but are overwhelmed by a wave of emotion, the warm goo of nostalgia, a dry tear?

But it’s not always the bittersweet ache of a lost childhood, phantom days of innocence and magic. As I write, a Kerry Muzzey piece that must have sculpted the air back when my life broke—now plays, dredging up vibes that can be translated only into rhythms and chords (not nouns and verbs).

Blown, tapped, and squeezed out by the Chamber Orchestra of London, the piece, a somber melody hovering in a see-saw of violins, is called “Broken People,” composed, surely, by a broken person gifted enough to alchemize those breaks into the air as art.

Broken people? The adjective’s redundant. We’re busted out of the box, the damage not in the shipping and handling (though they help) but in the assembly. Starting in Eden and plowing through ages, the brokenness comes out in us, real-time 3-D flesh and blood. Herodotus (fifth century BCE) wrote about a tribe that at a birth began a period of mourning (sitting shiva in reverse) because they anticipated what the infant, if it lived, would face. However alien to us the ritual, the logic works like geometry.

Broken people? As my seventh decade (I’m 63) slips away from under my feet, I can’t and don’t want to remember the mislaid parade of befouled souls and broken people who have mis-stepped, goose stepped, hobbled, and limped past me—who am to them just another doleful soul in line to nowhere. Broken people viewing broken people? Does that perspective help us empathize or grind down our nerves into indifference?

Where do I begin? The incest, addictions, sickness, crimes, perversions, illness, greed, prejudices, dysfunction, domestic violence, adultery, inherited or acquired disease, or any of the ways people have expressed their brokenness? And these are just church folk; you know, the Remnant, “God’s people,” those preparing others for Jesus’ return and getting ready for when “the intercession of Christ shall cease in the sanctuary above, [and they] are to stand in the sight of a holy God without a mediator.”

I got nothing on nobody though. (Just a snippet): when dad left mom, within 24 hours mom moved her boyfriend into the house, but that didn’t last long because the FBI barged in and hauled Casanova, wanted for who-knows-what, off to the clink. My point? We’re all broken people whose brokenness is displayed as uniquely as a snowflake, that’s all. And to quote T. S. Eliot (via J. Alfred Prufrock), even when we “prepare a face to meet the face you meet,” those breaks worm their way out, anyway. “What person,” wrote Li Shangyin, “lacks a secret sorrow?” Even in China, 1,300 years ago, the brokenness was apparent.

“Why live,” said an advertisement for an early American undertaker, “when you can be buried for 10 dollars?” There’s something to the logic here, too, which shows how absurd this procession of broken people hobbling along like prisoners of war can seem. When Nobel laurate Steven Weinberg could write that “the more the universe seems comprehensible, the more it also seems pointless,” what’s left for us as busted bits of carbon-based matter amid that universe? (I loved the response of Harvard astronomer Martha Geller to Weinberg’s pointless universe: “Why should it have a point? What point? It’s just a physical system, what point is there? I’ve always been puzzled by that statement.”)

My favorite Bible story is about the thief on the cross. If that poor schnook could be saved, then this one could be as well. Though justified, and assured of salvation, the thief wasn’t suddenly brought down and left to live happily ever after.

Next to him was Jesus on His cross, bearing holoyanu and macovaynu (“ourgriefs . . . and our sorrows” [Isa. 53:4]), experiencing at once the brokenness of all our cracks and rifts, taking everything upon Himself so that ultimately the sounds of our crumpled lives will be replaced by the sounds of our praise: “Alleluia! For the Lord God Omnipotent reigns!” (Rev. 12:7, NKJV).

Until then Kerry Muzzey’s “Broken People” remains an anthem to our agony, and like this column an attempt to, however fleetingly, transcend it. 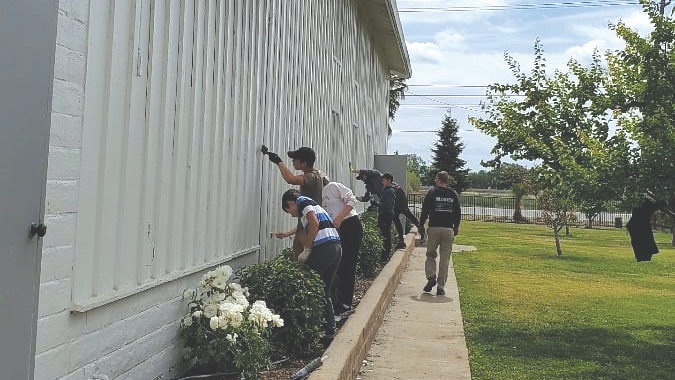