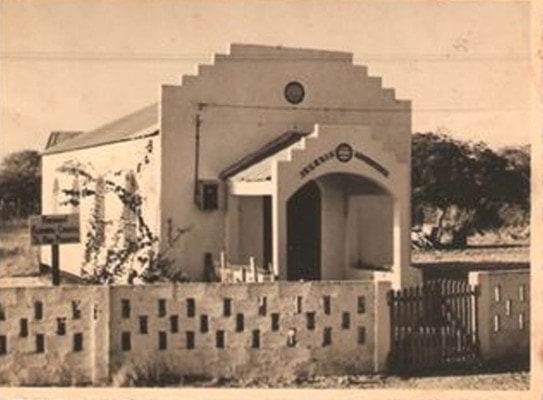 Bonaire is a small island located in the Caribbean Sea to the north of Venezuela. It has a total area of 294 square kilometers (114 square miles) and a population of 21,000 as of June 2019. The official language is Dutch, and the recognized regional language is Papiamento. The official beginning of the church work dates in 1942.

In the beginning of the church work in Bonaire, the people that were baptized were not highly educated; they were farmers, fishermen, merchants, and manual workers. Consequently, little was documented in writing; instead, everything was passed down orally. As elders chaired church board meetings, the minutes would be written, but no historic or memorable occurrences were documented. Most of what is currently known was passed down to the children of the first members of the church. The movement’s growth is documented in interviews and conversations with the current brethren of the church.

In early 1932, Brother José Lancrey started the work in Rincon in a store he had rented from Johannes Ellis. He wrapped a tract into every package of goods he sold. He got many people interested and began to study with them. People had to hide to read the Bible in that time since the Catholic Church discouraged its members from reading the Bible. He even gained the interest of two young ladies, Maria and Ursula Ellis, who would later marry Elder Roa and Brother Enrique Elisabeth. After that, Brother Lancrey returned to Curaçao.

Even though the Adventist message had been preached in Bonaire since 1932, the first baptism on the island took place on May 24, 1941. Six people were baptized: Evarista and Lourens Felida, Hilda Sophia, Roberto Anthony, Pedro Thomas, and Margarita Coffie. These members were granted fellowship at the Mundu Nobo Church in Curaçao because the brethren who worked in Bonaire were from that church in Curaçao, and there was no church organized in Bonaire at the time. After this first baptism, José Lancrey, Domingo Martin, and Rafael Anthony went to work in Bonaire. Elder Leon Gardiner officiated the first Seventh-day Adventist wedding in Bonaire, that of José Lancrey and Catharina Jansen, which took place on September 9, 1941.

Elder Gardiner kept working hard in Bonaire with dedicated members to establish a church. The church was organized on March 21, 1942, with 22 members. All this resulted from the commitment of Elder Gardiner, who worked within the three ABC islands. He also baptized Serviliano Bernabela, who lived in Aruba in 1942. In December 1951, Bernabela arrived in Bonaire and became a prominent member of the Seventh-day Adventist Church of Antriol in Bonaire. For a long time, he led the church in absence of a pastor while serving as treasurer for over 40 years.

The history of the Adventist Church in Bonaire recognizes many elders and pastors for their work on the island. They all arrived from other countries because Bonaire didn’t have native ministers or pastors. As the native language of Bonaire is Papiamento, and as most of the native population didn’t speak many languages, translations into Papiamento were necessary for all the preaching and sermons. Serviliano Bernabela, better known as Brother Miano, did all the translations from English and Spanish to Papiamento. Brother Bernabela was married to Mrs. Josephine Bernabela-Watson, a Surinam lady, who spoke mostly Dutch and a little English, so he also translated for the Dutch pastors who visited the island.

Another important person in Adventist history in Bonaire was Brother Enrique Elisabeth, a colporteur whose wife was originally from Bonaire. He did groundbreaking work as a colporteur, selling his books from door to door through the 1950s. His marriage to a native of Rincon made opening doors in a predominantly Catholic population slightly easier.

Around 1961, another church was built in Rincon. The brethren in Rincon were committed to spreading the Adventist faith. In 1966, according to available information, Bonaire had 60 church members. In 2017, Bonaire Mission was established as a part of Dutch Caribbean Union Mission.  As of June 2019, Bonaire Mission had three churches and 436 baptized members.