One of Silicon Valley’s brightest minds challenged 400 world leaders of the Seventh-day Adventist Church to create a climate of innovation at every level of the movement.

“I think aspiration is the best insurance against irrelevance," management thinker Gary Hamel declared in a keynote address to the Leadership Education and Development (LEAD) training program, which preceded the October 11 opening of the General Conference of Seventh-day Adventists’ Annual Council.  "No organization ever outperforms its own aspirations."

Hamel, cited by The Wall Street Journal in 2008 as the world’s most influential business thinker, encouraged leaders to be aware of changing climates in their constituencies. Overall, he said, society is changing the way it views and interacts with institutions such as the church, sometimes rendering those institutions less effective: “Every successful organization is successful until it’s not,” adding, “as human beings, we are all susceptible to denial.”

The LEAD program is part of an effort to introduce Seventh-day Adventist Church decision-makers worldwide to current innovations and best practices in leadership.

Hamel is a founder of Strategos, an international management consulting firm. His books include “What Matters Now,” a guide to building organizations that thrive amid uncertainty and shifting priorities.

He urged Adventist leaders to facilitate experimentation and change within the organization’s ranks: “The pace for change is ultimately the question of how much experimentation is going on inside that organization,” Hamel said. “The job of every leader is make sure that change always seems more exciting than standing back.”

Hamel reminded his audience that while divinely-given truths are eternal, the structures of organizations to communicate those truths can and should adapt to the times: “We don't' worship tradition, we worship a risen Lord,” he said.

Drawing from his consulting experience at the epicenter of America’s high technology industry, the famed “Silicon Valley” area between San Jose and San Francisco, California, he noted that Google strives to have 5,000 experiments aimed at improving the firm’s computer search technology every year, with the expectation that a significant number will yield results for the firm.

Hamel said that while the church is committed to redemption, renewal and reconciliation, there are times when established programs, policies or practices obscure the core message.

“The only way you would really know you are committed is if you were willing to sacrifice some of those habits, some of those structures, to those commitments,” he said.

G. T. Ng, executive secretary of the General Conference, said Hamel's earlier presentations to the Secretariat department sparked the invitation to address the leadership at this year’s Council. Ng said the church can learn much from Hamel's message.

"The church at different levels could do more to overcome the inertia to change in terms of methodologies, to maximize the use of technology, to keep pace with a fast changing world," Ng said. "We probably could do better in empowering the rank and file for mission by removing or reducing red tape. In [Secretariat] we have already taken steps in that direction.  The South Pacific Division's example of downsizing in order to allocate more money for mission is a good example."

“This message is not to be separated from the gospel message. Some of the health promoting effects of the health message have been conﬁrmed by science, but today’s most skillful and perceptive scientist cannot bring the dead to life,” Hardinge said. “Jesus is the only life giver, and He is the only health giver.”

Kathleen Kuntaraf, also an associate Health Ministries director, discussed how Seventh-day Adventist health principles can help fight against non-communicable diseases. “God truly cares for us and gave us this wholistic packaged prescription for our own good,” she said. “However, the struggle between making good and bad choices for our health is a continuous one.

And Peter Landless, who recently assumed leadership of the Health Ministries department, noted the end-time importance of sharing health education with the world at large: “The world is facing unprecedented challenges both in the developed countries and in the emerging economies by the issues of obesity, type II diabetes, hypertension, tobacco-related diseases and coronary artery disease. We are called not only to practice temperance in our lives, live the health advantage that has been so generously given to us but also to share it with a broken and dying world.”

Following Hamel’s Friday morning message, hypothetical and actual case studies of leadership situations were presented to the church leaders. A drama team of students from Washington Adventist University presented a skit pitting the arguments of “Dr. Evan Keel Church” against those from member “Youneeda Change,” asking the audience to decide how best to implement change.

Two other case studies, though hypothetical, also reflected challenges many administrators face. One centered on an Adventist hospital that was once a local leader, but had fallen on hard times, and the other concerned a dynamic pastor who, when elevated to a leadership position, was unable to gain cooperation and began to “steamroll” his positions through. In each of these instances, audience questions were designed to guide leaders into a greater understanding of how to deal with, and improve, such situations. 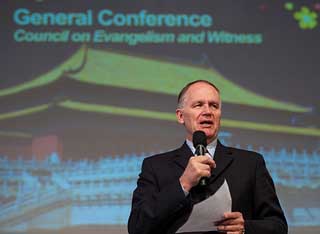 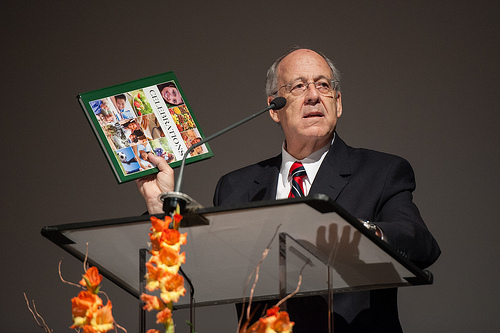