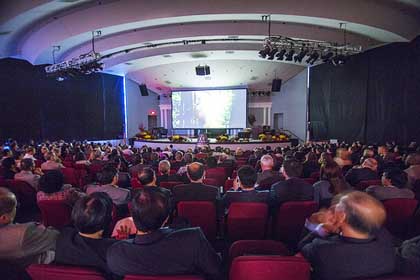 “The Creation: The Earth Is a Witness,” a 27-minute high-definition video featuring footage from the Hubble Space Telescope, the U.S. National Aeronautics and Space Agency, and the European Space Agency, made a formal debut at the 2013 Annual Council of Seventh-day Adventist church leaders on October 15. A Seventh-day Adventist from Germany, Henry Stober, produced the project, which already has been viewed by more than 70,000 people in nine countries.

Thunderous applause greeted the presentation, whose narration comes from the book of Genesis and whose storyline creatively imagines how creation week may have unfolded. The film’s release and distribution in 2014 will be supported by other Adventist Church evangelism events aimed at highlighting both the six days of creation and the seventh day, the Sabbath, when God rested and which He sanctified, or made holy.

“The idea is for local churches to advertise [screenings] to the public,” said Pastor Ted N.C. Wilson, General Conference president. “In some places, 95 percent of those attending are non-members,” he added. Wilson said the film showing could be followed by a lecture that expands on the main themes, concluding with an offer to sign up visitors for Bible studies, and other services from the Church. “This would be very useful for ministry to the cities,” he added.

Adventist World Radio, the radio broadcast and Internet podcast service of the Church, will translate the dialogue of the film into as many as 90 different languages, so localized versions might be available.

The film was initially a project Stober prepared for his local congregation in Nürnberg, Germany. He studied photography for a year in Canada, and then traveled to five continents to film because he wanted to show God’s love and unique creative power.

Each of the days of creation is traced, with perhaps the most dramatic moments coming on the sixth day, when ethereal hands form dirt into a man’s body. The film concludes with actors portraying Moses and his son, Gershon, worshipping before an altar on the Sabbath day, the day that is a memorial to creation week.

The film’s presentation followed a morning devotional message from Williams Costa, Jr., communication director for the General Conference. A native of Brazil, Costa told of how his faith in the creation -- and the Sabbath -- led to a personal crisis and continued faithfulness to Biblical truth while a student in the city of Tatuí. 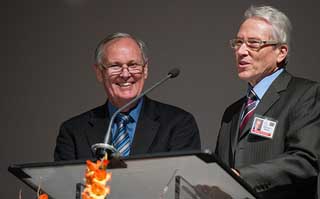 Despite a technical error, playing two works by the same composer, Costa won the competition when he miraculously memorized another piece within half an hour and played it for the judges. He said it was his faithfulness to the Sabbath that led him to this success.

“God is faithful and I can testify to that, even when it seems He is not around,” Costa said. Later, discussing the need to share a biblical answer to evolution, he added, “I have a dream that our church will rise up and share the message that he is the Creator.”

That dream was echoed in statements from a succession of General Conference leaders. Ministerial Association associate secretary Derek Morris explained how the www.creationsabbath.net website supported efforts to disseminate the message, and said the January 2015 issue of Ministry, which he edits, will be devoted to the topic of creation and Sabbath. Adventist Review/Adventist World editor and executive publisher Bill Knott told delegates that the church’s oldest and most widely distributed magazines “will continue to do what the Adventist Review has been doing for 164 years—sharing the Biblical truth of God’s creative activity as found in the book of Genesis.”  Knott noted that the magazines have published 41 articles on creation, faith and science issues, and the significance of the church’s teaching on origins during the past four years, “almost one per month.”

Children’s ministry director Linda Koh announced the launch of “The Creation Case,” a 13-episode DVD for kids highlighting the creation story, along with an activity book. Stewardship ministries director Erika Puni and associate Larry Evans detailed the special stewardship/creation issue of Dynamic Steward magazine, which has won acclaim from and non-members.

The details continued: André Brink, associate communication director, previewed a television series, “Animal Encounters” that blends natural life with a creation emphasis. Ekkehard Müller of the Biblical Research Institute and Jim Gibson of the Geoscience Research Institute highlighted their centers’ efforts to promote scholarly understanding of creation. And the 2014 “sharing book” for the Church is “Beyond Imagination,” with Gibson one of three co-authors, which shows the significance of the creation story to the truths of redemption through Christ.

In other morning actions, delegates voted to receive a statement from the recent International Urban Mission Conference, in which the church pledged to make significant efforts to reach large cities, particularly those without a Seventh-day Adventist presence. It calls for a “twice-yearly reporting and assessment system that informs the church about urban mission objectives, activities, and progress.”