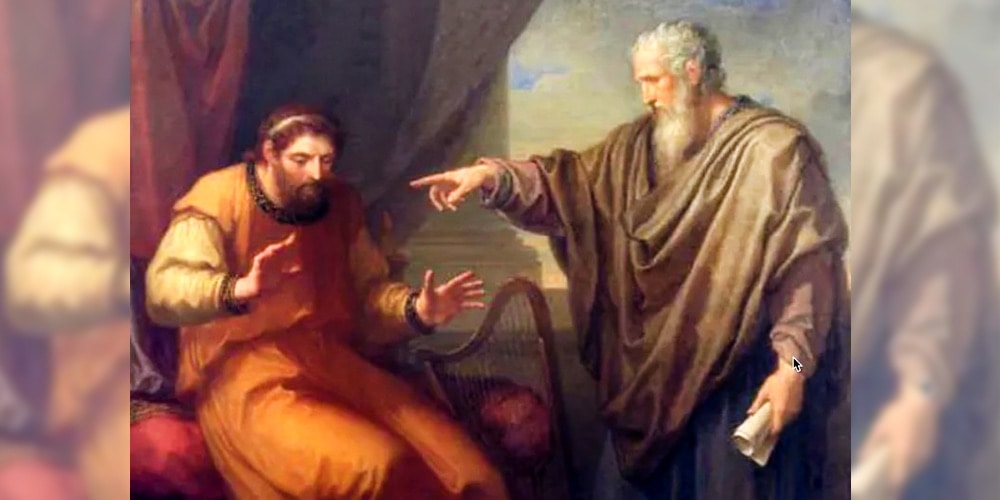 “Now I’ve heard there was a secret chord

That David played, and it pleased the Lord

But you don’t really care for music, do you?”

And so begins the first three beautiful lines of what is considered to be Leonard Cohen’s most famous song, “Hallelujah,” covered by more than a thousand recording artists in scores of languages.1 Canadian poet, folk-rock musician, and novelist, Cohen was the son of Jewish immigrants from Lithuania and Poland, whose Old Testament religious background suffused his writing.

In “Hallelujah,” the lyrics go on to include reference to one of the most poignant moments in the life of David, the son of Jesse, and possibly in the entire Jewish scripture: his adulterous encounter with Bathsheba:

“You saw her bathing on the roof

Her beauty and the moonlight overthrew you.”

The lyrics of this moving piece of music recount in somewhat euphemistic words a grave mistake that the songwriter has made and his repentance for it. There is, in fact, a surely more than coincidental expression in this song with a psalm of David that Cohen must have been familiar with from the roots in his Jewish culture. And for those Christians who count as Scripture both Old and New Testaments, this account of adultery and murder may be all too recognizable.

Thinking back, in fact, on the inclusion of this sordid event in Scripture from the life of David—psalmist and king—has brought questions to readers of Scripture ever since. This was a man whom God considered in the Old Testament “after His own heart” (1 Sam. 13:14, NKJV). And the apostle Paul, in the New Testament, reminded his listeners of God’s blessing on David as a leader: “I have found David son of Jesse, a man after my own heart” (Acts 13:22, NIV).

But as Ellen G. White observed, leadership of that time presented unusual temptation. “According to the customs prevailing among Eastern rulers, crimes not to be tolerated in subjects were uncondemned in the king; the monarch was not under obligation to exercise the same self-restraint as the subject.”2 So there, in God’s Holy Word, is included an account of a man privileged for God-ordained leadership who broke not one, but three of the Ten Commandments.

And these three commandments were among those that directly inflicted harm on other human beings. Taking God’s name in vain or breaking the Sabbath or coveting one’s neighbor’s house brings no obvious or immediate injury to another individual. But adultery and murder and covetousness of another’s wife are of another matter entirely. Even though these acts of this monarch were relatively secret, they did inflict harm on others—on Bathsheba, on Uriah, even on Joab, whom David involved in the coverup of his sin.

Then there came the exposure of the shocking crimes themselves. Here entered a prophet bidden by God to go to David’s court with a personal message. “Nathan delivered the divine sentence unflinchingly,” writes Ellen G. White, “yet with such heaven-born wisdom as to engage the sympathies of the king, to arouse his conscience, and to call from his lips the sentence of death upon himself.”3

Scripture records some dramatic examples of “speaking truth to power.” Moses stood in the court of the great pharaoh of all of Egypt; Elijah defied King Ahab in word and act on Mount Carmel; Esther, in her more diplomatic way, disclosed the truth to King Ahasuerus, who reigned over an area from India to Ethiopia.

But Nathan’s presentation before David must surely be at the very apex of these representations. Opening with a kind of “once upon a time,” the prophet deftly led the king’s enrapt attention to the verdict on himself: “Thou art the man” (2 Sam. 12:7, KJV).

It may be interesting to consider the response of those in David’s court hearing this prophet’s story. While some may have been scratching their heads over all of this, wondering exactly what the prophet was trying to say, there was no uncertainty in the king’s mind. David was truly a man of action, but he was also a lifelong author of psalms and of the figurative language from which psalms are composed. He well knew of metaphor and parable—“The Lord is my shepherd”; “Thy word is a lamp uno my feet.” And his conscience surely provided all the explication he needed. Though he had made effort to keep secret his own ghastly sin, he instantly knew the full meaning of Nathan’s parable.

According to God’s law, laid out so graphically and decisively in the Torah, justice was to be administered without any apparent exception. In God’s very words to Moses: “If a man commits adultery with another man’s wife—with the wife of his neighbor—both the adulterer and the adulteress must be put to death” (Lev. 20:10, NIV). Could explicit inclusion of “neighbor” be any more ironic in David’s case?

In the same session with Moses, God added: “Anyone who takes the life of a human being is to be put to death” (Lev. 24:17, NIV). So, if a trial of David were to be expressed in the terms of American jurisprudence, it might go something like “Guilty on two counts.”

The whole scenario, in fact, seems to cry out for poetic justice for this lifelong writer of poetry. What other God-given verdict could be handed down but that of death?

Ultimately all sin is a turning away from God.

This lawbreaker, however, responded in a truly heartfelt way that saved his life. He owned up to his guilt, without plea or excuse. “I have sinned against the Lord,” he declared (2 Sam. 12:13, NRSV).4

Justice was administered in this case in a way that exposed a deeper reality of the true nature of sin. “Nathan said to David, ‘Now the Lord has put away your sin; you shall not die. Nevertheless, because by this deed you have utterly scorned the Lord, the child that is born to you shall die’” (verses 13, 14, NRSV).

Though one may sin against another human being, ultimately all sin is a turning away from God. “The true character of evil is identified in the acknowledgement that all our sins are committed against God. . . . Sin, while tragically and destructively impacting other people, is foremost a rupture of our relationship with God.”5

This is what David meant by saying he had sinned against the Lord. It was a reiteration of the awful nature of sin that Joseph had exclaimed millennia before when he rejected the seduction of Potiphar’s wife. “How then could I do this great wickedness, and sin against God?” (Gen. 39:9, NRSV).

Ellen G. White also addresses this ultimate truth in her counsel to a fellow church member who had in some way sinned against another: “The brother whom you wounded is the property of God, and in injuring him you sinned against his Creator and Redeemer.”6

The Mystery of Grace

After the child was born to David and Bathsheba, it became desperately ill. For a week, in inconsolable anguish, David wept and begged that its life be spared. But the child perished.

Upon hearing of the child’s death, David recognized in it the justice of God’s love. Psalm 51 is the poet-king’s expression of regret for his carnal sin, his praise for God’s love and grace, and his begging for a “clean heart” (verse 10, NKJV).

And this same acceptance of the mystery of grace occurs at the end of Leonard Cohen’s song, “Hallelujah”:

“And even though it all went wrong

I’ll stand before the Lord of Song

With nothing on my tongue but Hallelujah.”

Gary Swanson is a freelance writer and editor who lives in Maryland, United Stat
es, and edits Perspective Digest.

4 Bible texts credited to NRSV are from the New Revised Standard Version of the Bible, copyright ã 1989 by the Division of Christian Education of the National Council of the Churches of Christ in the U.S.A. Used by permission.