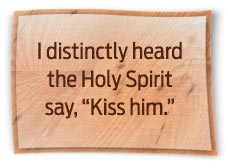 BY DEBORAH HOLLOWAY
I will soon have managed to be a widow for three years. I’m still not used to that term, but it is what it is. In some ways it seems just like yesterday. The hurt seems as raw as ever. Not so much the pain of loneliness, but the agony of regret.

Regret seems to be my constant companion. Those little things left unsaid or undone become huge when the other party is gone and things can’t be “fixed.” I never knew how much unsaid words or forgotten kisses would mean after death. Not to him, of course, but to me.

Life Together
In many ways Dan, my husband of 40 years, was a romantic. The first flower of the season was always placed in a vase on the kitchen window, handed to me as I arose first thing in the morning, or given to me with instructions to put it in my hair.
Growing older, he became a man of few words. He often said, “I can’t write flowery words in a card, but I sure can pick them.” And he was right. The words on a page may not have been eloquent, but they were always from his heart.

Unfortunately, over the years I grew to take such things for granted. One of the things I miss most from him is his daily kisses. I received at least one kiss a day with the words “Have I told you lately that I love you?”

Many women today would die for a man who had this routine, but I took this gesture for granted. What’s worse, I rarely returned the favor. Often at the end of the day he would say to me, “Do you know how long it’s been since I’ve had a kiss from you?”

Regrets: those feelings of sorrow about things that can never be restored. Regrets have loomed high in my thoughts these past three years.

To Do It Again

Case in point: I distinctly remember bringing Dan home from the hospital the day he died. He had been there three days having a stent put in. We’d been arguing most of the time (he was a horrible patient, and I was a worse caregiver). He wasn’t ready to come home; I recognized the signs. This wasn’t my first rodeo. I knew what things should look like before he left the hospital.
I spoke to the doctor about this, but he and I didn’t see eye to eye on the situation. Anyway, it was Thanksgiving Day, and Dan was going home—regardless.

After falling off the steps outside the house (he wouldn’t wait for me to help him as I told him to), we finally settled in. He was in his recliner and ready to watch what was left of Thanksgiving Day football. I was exhausted. As I rose from my chair to take a well-deserved nap, I distinctly heard the Holy Spirit say, “Kiss him.”

All I had left were regrets, and the hope that God’s Word is true when it says that all things work together for good to those who love the Lord (Rom. 8:28).

I continue to hope that these regrets will someday be put behind me. I see the manifestation of God’s glory in the new way I look at family relationships. I kiss my children and grandchildren more often, and I am much more careful with my words.
Hosea 2:15 says in part: “I will . . . make the Valley of Achor [trouble] a door of hope.” Over the years the Lord has been true to His word. I just wish I had it to do over so I could hear Dan say, “It’s OK, Mrs. Pretty; I forgive you.”