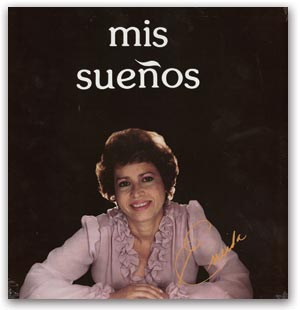 Kimberly Luste MaranI cannot help thinking of family during the holiday season. Delicious food, board games, funny stories, shared blankets in warm rooms—these things are woven tightly together to create a wrap of nostalgia, happiness, and contentment. The oftentimes bitter and biting winds of everyday life have been easier for me to bear when I’m enfolded in holiday memories. These moments—and the people who have made them what they are—have been a precious gift. Even in seasons of drought when gathering time has been less than ideal—or nonexistent—I clutch my memories to my chest, and my heart smiles. I thank God for the gift.

My great-aunt Eneida Yapor, known to most in our family simply as “Titi Nin,” occupies a particularly bright spot on my memory quilt. She was famous for being high-handed and plainspoken—she offended more than one brother, sister, niece, or nephew—but she was also known for her generosity and hospitality. Widowed early, Titi Nin, until shortly before her death, painted a pretty picture as a trim, well-coiffed, and well-dressed (and feisty) lady. With great verve and wit, she’d tell stories—and laugh boisterously and fully. She made everyone—including a shy little girl who felt awe and a little fear in her great-aunt’s presence—welcome. (It’s rumored that her first name was actually Bienvenida, and her middle name Eneida.) Titi Nin was gifted in caring for others—in drawing people together.

She insisted on hosting all holiday festivities—she usually got her way. Her arroz con gandules was the best in the family. She was probably the best singer too (and she’s the only one in our family that I know of who recorded an album), often singing religious hymns in concerts and at church. But for me her ability to get individuals to enjoy each other’s company was her greatest asset.

It was with some shock and a lot of sadness that I received the message that Titi Nin had passed away this past June. A victim of Alzheimer’s disease, Titi Nin had been residing in a retirement home. She was at a meal, laughing and talking (so I was told), when her heart stopped. She could not be resuscitated.

In a whirlwind of 24 hours I made the out-of-state trip for her funeral—and got together with my family to say goodbye to our matriarch. I showed up at Titi Nin’s wake just as her son was sharing last memories and wrapping up the service with one more listen to her operatic rendition of “La Ciudad Santa” (“The Holy City”). The next morning found family and friends saying farewells at the funeral and graveside. And even though Titi Nin was sleeping in Jesus, she had one last memory, one last gift, to give.

As I tossed a crumpled rose on her casket and wiped at my stinging eyes, I saw my mom beckon me to where she was standing with her sisters. “We need to sing,” she said simply. I understood immediately.

For the woman who had brought so much life, laughter, and song into my mother’s life, and her siblings’ lives, we needed to sing. “OK . . .” I said with question built in the reply.

Much better in a choir setting, I gulped. “Me?” My mom nodded. “What?”

Gulping again, I sent a silent prayer heavenward and began. Almost immediately the “Gallardo sisters” chimed in with lovely, pure soprano and alto voices. They were voices, groomed in part by Titi Nin, that held all within hearing transfixed.

I cannot recall hearing my mom and her sisters sing together, although when they were children Little Grandma and Titi Nin had them perform many times at church events. That day at the grave I listened as their voices blended in perfect harmony. Everyone gathered at the burial site ceased talking and, regardless of where they were from, or what they believed, listened.

The trio sang a couple more hymns before the crowd dispersed. Blessed, we left Eneida to the ground. Still feeling the warm embrace of the words and music, I thanked Titi Nin for that one last gift.
And I thanked God.